C IS FOR COINCIDENCE

Well the best laid plans....I planned not to miss any weeks of ABC this time around so am making a special effort to get this in under the wire.

Exactly one year ago to the day, I was whisked away to the emergency room for an intestinal  problem.

I just got home from the hospital and decided I might have time to meet the deadline for ABC WED.,
but lacking in mental and physical energy not to mention creativity I do not have much to offer.....well,  I did come up with a good C word for today.

Thanks to all ABCer leaders. Please visit HERE for many much better contributions to this popular and fun project. You won't regret it.
Posted by ChrisJ at 10:29 PM 11 comments:

MY BOYS
I promise I won't make these posts just a litany of relatives.  But I did say I would use ideas of things that mean a lot to me and I couldn't pass the letter "B" without reference to my sons, commonly referred to as "the boys".

Never did I ever dream that I would end up being the mother of two boys (now in their 40's).  First
of all I didn't think I would ever get married -- it was too risky, I figured.  Then I had decided in my teens I didn't want children -- not sure why.  Probably thought that was too risky also.  All part of my defenses I think, to not do anything I couldn't succeed at.  Not sure where that came from either.

Well my husband changed all that and now here I am, married for almost 55 years with two sons whom I love dearly and of whom I am so proud.  Raising kids as teens in Southern California when drugs were as plentiful as candy during the 70's and 80's, was no picnic but having made the first two decisions, (and now being a committed Christian, with a loving husband, so I wasn't alone),  I wasn't about to give up.

Do you remember the movie "Chariots of Fire"?  And do you remember one of the characters in the movie who was an Olympic runner saying to his girlfriend, "I won't run if I can't win"?  She replied, "Well you won't win if you don't run."

That clip certainly made me think.  I never thought I was good enough at anything.  A definite perfectionist.  Never good enough for myself.  So if I was going to be a mother -- and a wife -- I was going to be a GOOD one.  Our high school principal had one motto which she used frequently:  "Standards, girls, standards!"  I guess that seven years of that drilled into me definitely 'took'.  But I don't regret it.  Just wish I'd cut myself some slack once in a while.

So here they are, as loved as much as any mother's sons could be: 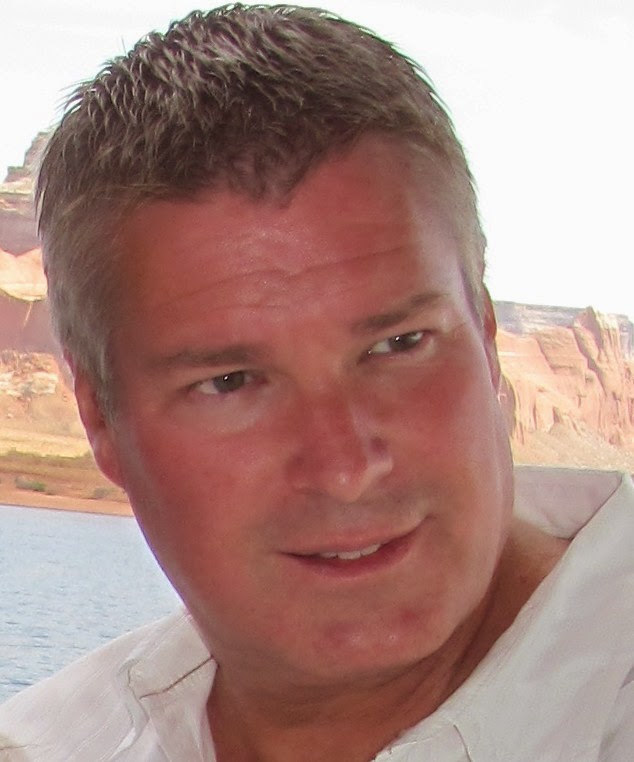 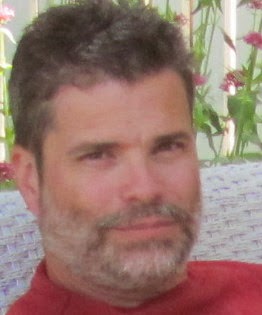 Then of course there's my other 'boy' who did all his part and much, much more: 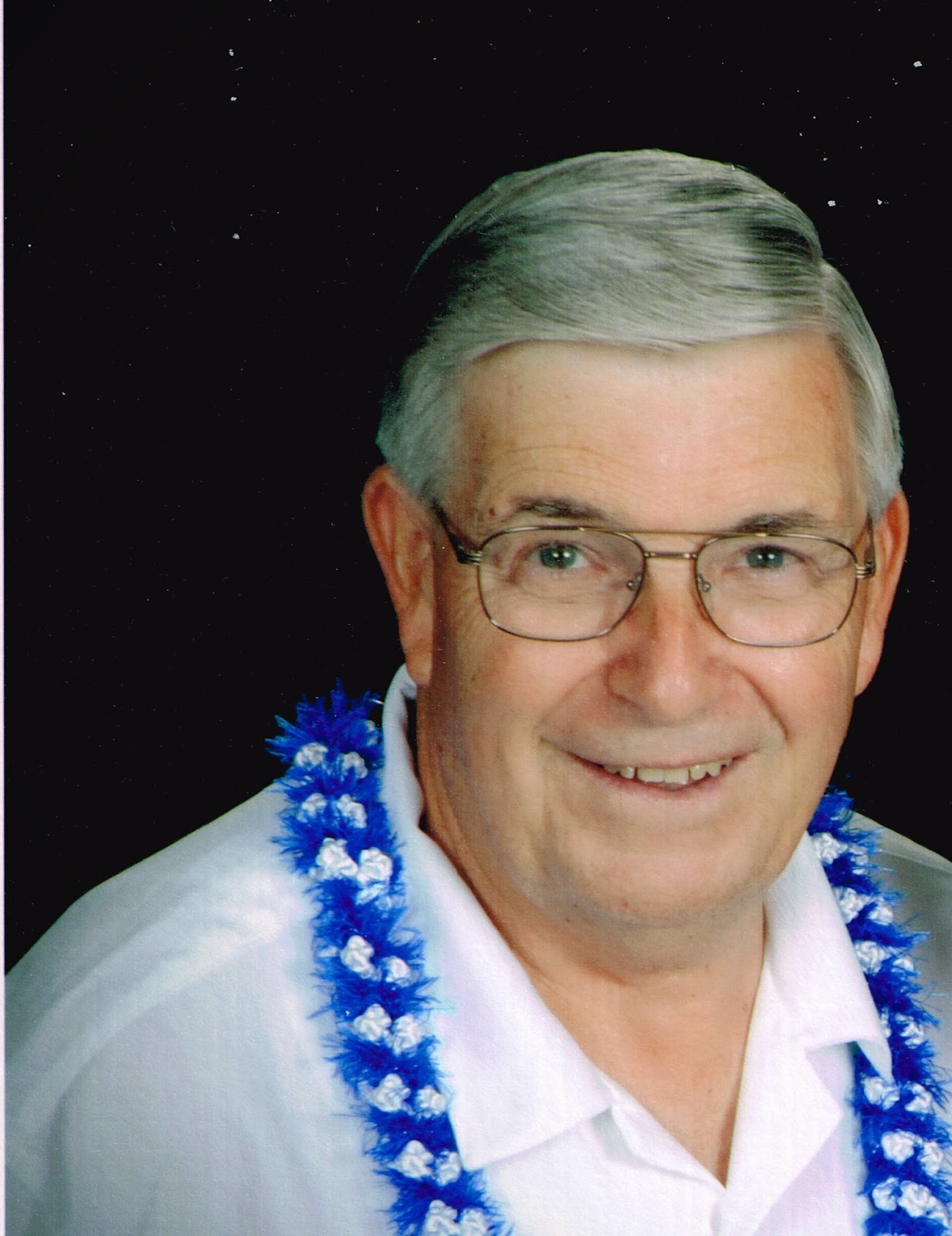 ...wearing his lei from the Islands of Micronesia... 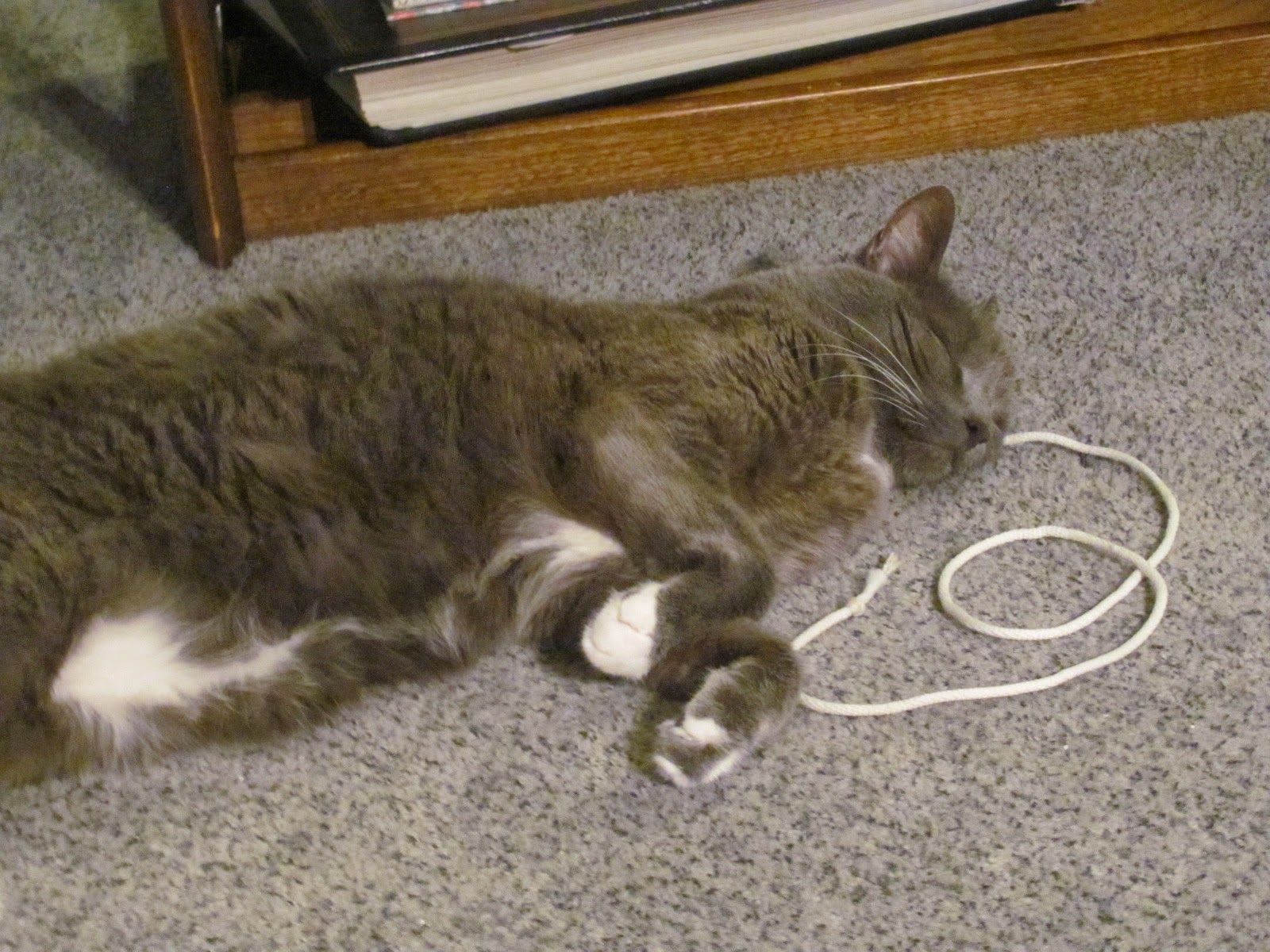 He has taken to lying on his favorite toy, just in case someone will play with him.

Thanks to the ABC team who work hard at keeping this project going, now in its 15th round.  Please click HERE to see all the other enterprising entries.  I promise you will learn something new.

P.S.  FOR AN ABSOLUTE THRILL ON THIS TOPIC PLEASE ALSO VISIT  HERE.   I promise you won't be disappointed.

This week our theme is

A nice simple theme that makes me feel hungry when I look at it. But I really enjoyed doing this -- especially the loaf with its crusty top.  I always start out thinking, "No way.  I can't do this", then i get started and I find I can.  Wish I hadn't used yellow card though.  I bought a stack of cards 4x6 containing five different colors thinking this would help me fill in the background.  Sometimes it does, but not in this case.  It was just too yellow.  Well, you live and learn. 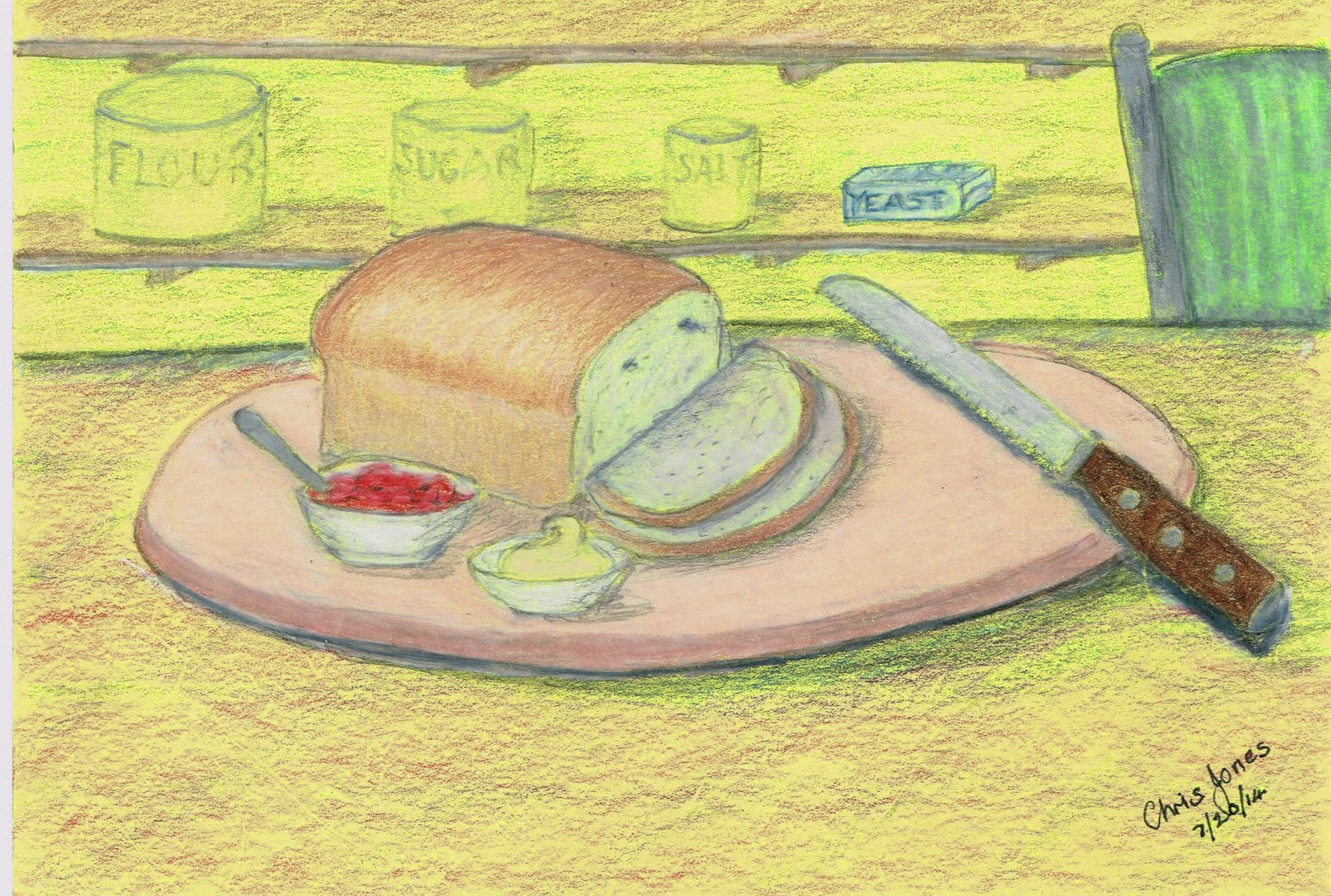 Sorry I missed last week.  We had company, which was fun but my laptop also picked up a virus which was NOT fun.  It had to go to the hospital for a few days.  It was a nasty one.

Now pop over to Creative Tuesday by clicking HERE and see what others have done with the theme this week.
Posted by ChrisJ at 4:09 PM 9 comments:

I seem to need some incentive these days to keep up with my blogging so I decided to join up with ABC Wednesday again.  This time I have to decided to use words that are to do with things that are meaningful to me and I may not always have a photograph.

Alan is a good friend of ours from Australia.  He has been staying with us this week as a break from his 'world travels'.  He inherited the position my husband held for six years, that of President of the World Evangelical Congregational Fellowship (WECF).  This entails traveling to the many countries in which we have WECF churches -- Guam and Micronesia, Canada, Bulgaria, Brazil, Argentina, the UK, Spain, Ukraine, New Zealand, South Africa and others.

It has been fun catching up with the news from our friends all over the world.  He and Barry have hardly stopped talking all week. We have sat on the deck watching the birds and drinking tea every afternoon.  Alan is very easy to look after -- a very gracious without being stuffy, man.  Others of our church friends here in Carlsbad have been anxious to visit with Alan too, so we have been eating out quite a bit.  Today we went to the British Food Store -- a Bit O' Britain and had cream teas!  Yum!! We will have to get back to walking again when all the visiting has ended.

Friends are one of our richest blessings and we are doubly blessed to be able to stay in Carlsbad since our retirement where most of our friends reside.

To meet others who participate in ABC Wednesday and enjoy their contribution each week, please click HERE
Posted by ChrisJ at 6:50 PM 14 comments:

It's been a couple of weeks since I have posted anything on my blog.  I haven't been doing nothing in that time, in fact I have written three articles for our Community magazine all of which have been accepted and I have submitted one photograph for the cover.  I thought you might be interested in at least one of these articles, so I have reproduced it here.  I am quite limited in how long the articles may be -- no longer  than 450 words which for me is next to nothing as the articles I'm used to writing are usually 2,500 words !  Quite a difference.

This is the first one:

“I HAVE NOT YET BEGUN TO FIGHT!”

Chris Jones
When I was in my teens, I lived in the little fishing village of Flamborough on the east coast of Yorkshire.  It is located on a headland that juts 6 miles out into the North Sea.  Little did I know then that I would end up becoming an American citizen and living in Southern California.

Something else I didn’t know then was that in September of 1779 there was a major naval battle during the American War of Independence fought just 3 miles off our headland known as the Battle of Flamborough Head.  The battle was between John Paul Jones on the Bonhomme Richard and the captain of the British frigate, Serapis
.
The fierce battle lasted many hours, and could be clearly seen by the local population from the cliff tops on that bright moonlight night.  John Paul Jones’ ship took debilitating fire and it is said that the captain of the Serapis relayed a message to Jones asking if he was ready to strike his colors and give up.  Jones’  feisty reply, with shattered timbers and burning sailcloth falling around him was, “Give up?  I have not yet begun to fight!
”
Eventually it was the Serapis who had to surrender having lost large numbers of men.  Jones made an attempt to tow the Serapis  over to Holland as his bounty, but his own ship was so devastated by the battle that his men had to board the Serapis  and allow the Bonhomme Richard to sink somewhere off Flamborough Head and Filey Bay.
In recent years, there have been a number of attempts to find her, but the sea floor is  littered with so many wrecks off the headland, that there has not been any success.

Jones was originally a Scotsman but ended up fighting for the Americans after he had joined his brother who owned a plantation in Virginia. He developed an intense aversion to slavery so with his sharp mind  and head for strategy the military made sense for his future.  Brought up in Scotland, he had a good education and a strong sense of duty and integrity, although like any hero of yesteryear he has had his share of criticism from the history revisionists.

In addition to writing articles I have done a little art work.  As usual, when I haven't done a lot of
drawing I nearly always start again with some form of doodle or tangle. 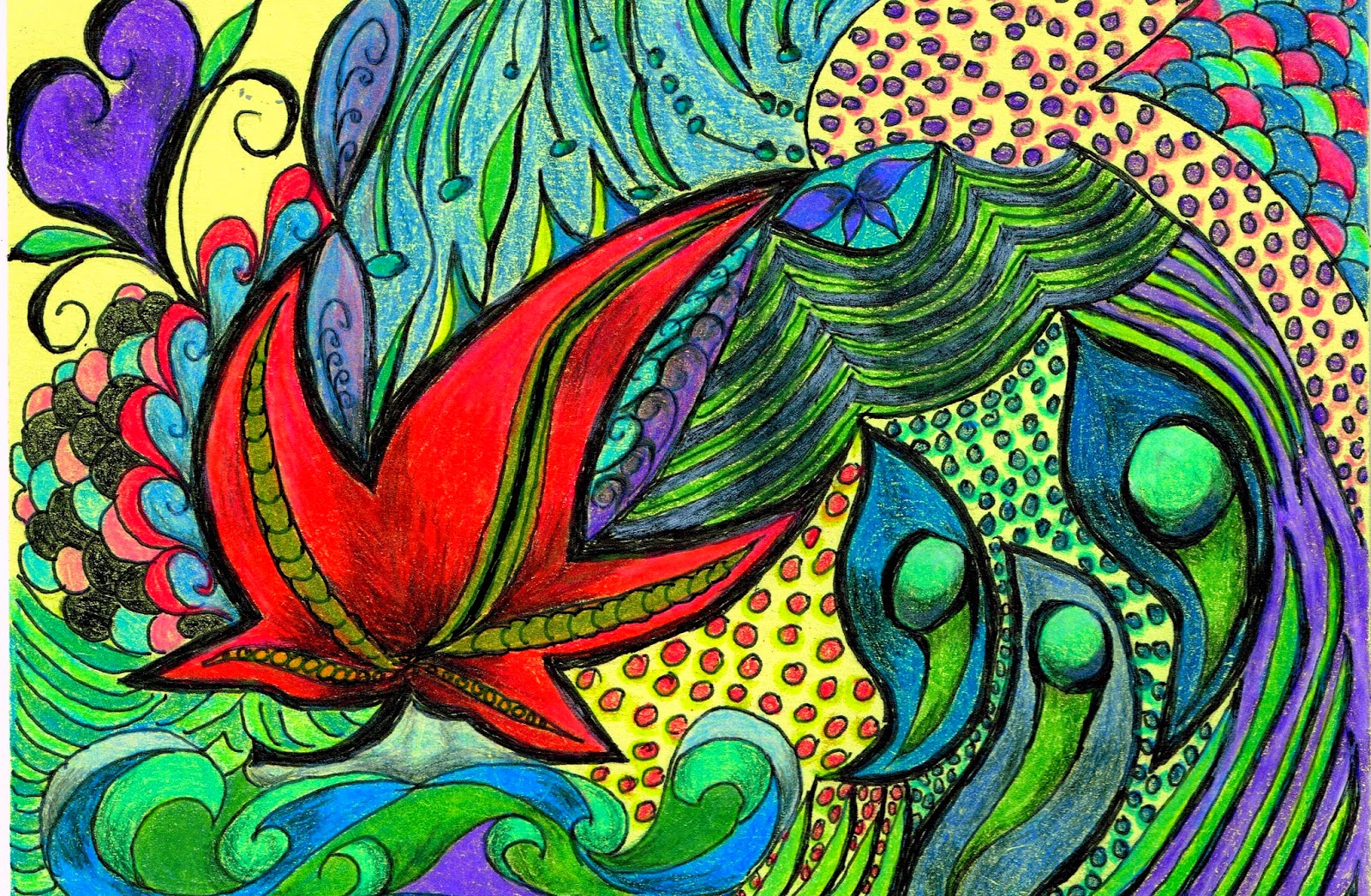 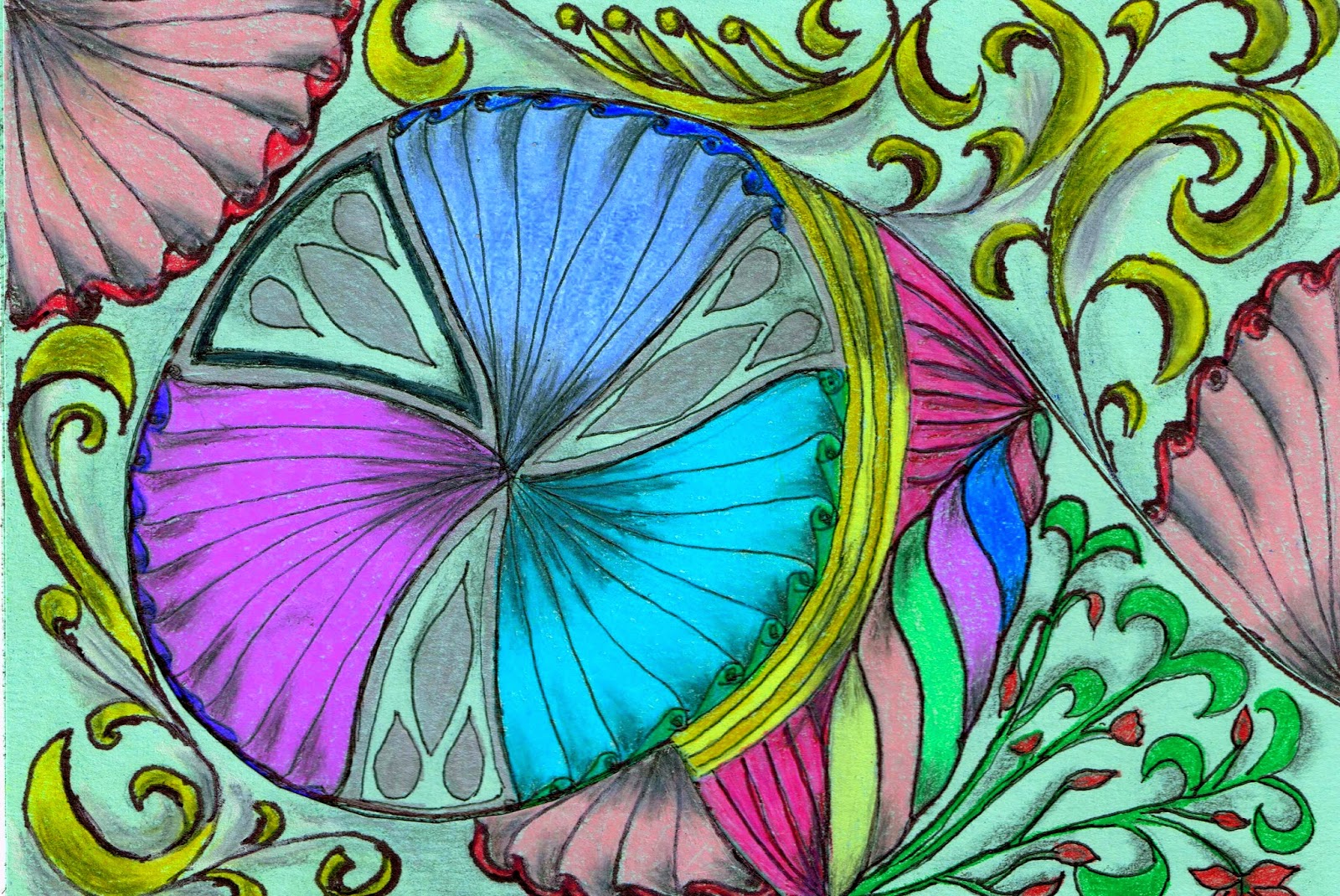 HAPPY FOURTH OF JULY EVERYONE!
Posted by ChrisJ at 2:39 PM 7 comments: