About half an hour ago I was over at Greg's General Store visiting for a while and found that the major topic of conversation was Allergies.  So far, Greg's friends all suffer from allergies, and since their theme for every Thursday is "Thankful Thursday', one might wonder what there is to be thankful for in allergies.  Greg's friends are thankful to be able to buy medication that relieves their allergies.  Well that makes sense.
I hope I will not bore you  if I mention one of my favorite topics once more  -- that is CATS.  No, I'm not a Crazy Cat Woman!  But I am thankful that I am not allergic to cats (so it seems, after working with them for the past 9 months).  I could well have been, as allergies are quite significant in my family and my sister is VERY allergic to them.  But I am sincerely thankful that I can tolerate cats as I find working with them very relaxing and a relief from stress.  Of course the Lord is the source of our relief from stress.  Prayer and reading the Scriptures are a major source of relief from stress, but I have found that God also gives us abundantly what we need to survive in this life so in my case He also gave me cats.  What has He given you?  Whatever it might be, think about it and be thankful.
Posted by ChrisJ at 10:58 PM 6 comments: 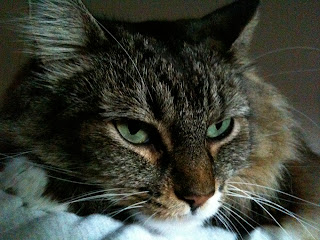 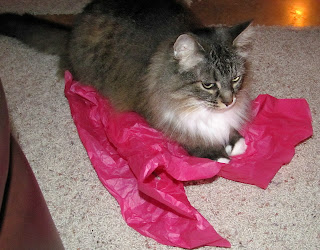 My oldest son's cat and therefore my grandcat! -- 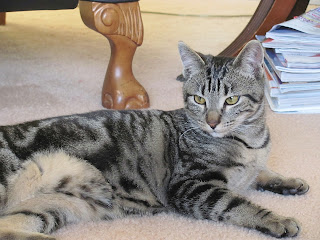 And this is Junie:


My rescued cat, which I rescued for some good friends of mine and who is now living in the lap of luxury!

Please visit abcwednesday-mrsnesbitt.blogspot.com to admire those creative beings who have come up with some outstanding "J"s
Posted by ChrisJ at 1:05 PM 16 comments:

Like many other people this week, I have been following events in Japan and Libya quite closely.  While everything was going on, a seemingly insignificant sound byte caught my ear and didn't really register with me until this evening while I was eating dinner.  It was a comment about the country of Libya.  Some reporter simply said in passing, "Libya is a country without trees.' Our dining room table looks out onto the patio which is surrounded by trees and shrubs.  It occurred to me while I was eating, how difficult it must be to live in a city without trees. No trees probably means no birds.  No trees means no shade. That shimmering dappled light threading through green leaves that is so easy on the eyes, would not be there to bring coolness and calm.  The extra hour daylight savings time brings,  means that I can eat dinner every night in calm and quiet surroundings for the next seven or eight months.  What a blessing!

God has provided us with everything we need to keep us happy.  What we do with what He has given us is entirely up to us.  I could sit through dinner watching crisis after crisis evolve on the TV.  I could eat to the blaring sound of rock music or quiet stimulating discussion.  What ever context I choose, it is indeed my choice.

So the gift of free will is actually a blessing. How ever we want to live our life here on earth, we can make it happen by making good and right decisions. God says, I have set before you, life and death , blessing and
cursing; therefore choose life.
Posted by ChrisJ at 9:20 PM 8 comments: 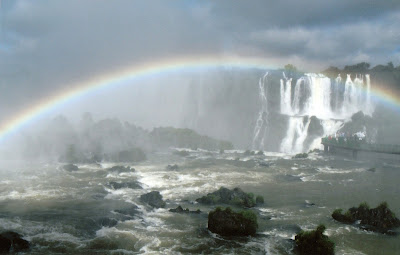 (I should be sure to give proper credit to my friend Charlene Stalder who took this photograph.)
The Iguazu Falls are located on the borders of Paraguay, Uruguay and Brazil. They are at least a mile wide, so what you see here is only part of them.  They come down in two or three sets of falls  It was about ten years ago when we first visited them.  It was magnificent!  We had had to take a two hour flight and a twenty minute bus ride.  It felt like we were going into the depths of the jungle -- which we were.  Today it is a little more developed than it was back then. 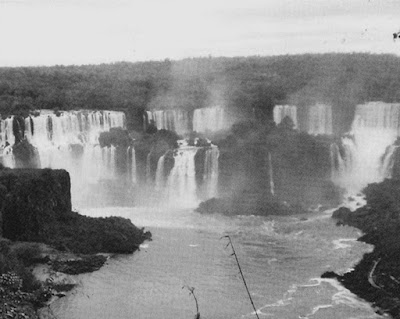 The old movie "The Mission" was staged there.
When I was a child I loved looking through all the old National Geographic magazines my father had saved.  I was only about 7 or 8 years old at the time, but Iguazu Falls, the Amazon River and the Amazon jungle were three of my favorite things that I wanted to do when I grew up.  Another was to visit Emerald Lake near Banff, British Colombia.  I am quite surprised to be able to say that I have seen them all!  I have been very fortunate.


This is my entry for Mrs. Nesbitt's ABC Wednesday.  Do go and visit others who are participating.
Posted by ChrisJ at 2:14 PM 21 comments:

A REALLY BIG ONE

I expect most people, like me, have been glued to their TV watching the horrific and devastating footage of Japan's earthquake. 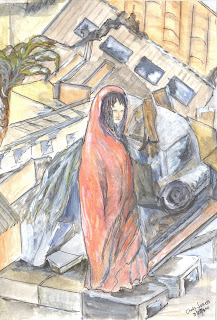 I decided to draw what I had seen, with the idea that putting it on paper would maybe put it more into perspective for me. I think I wanted to make it more true for me and not just another  American reality show. I especially wanted this because I know a serious earthquake could happen here, though I really don't think it would be as bad as the one in Japan. Then again, why do I believe that?  Just illogical thinking, I guess. But I'm a logical thinker --or maybe just a wishful thinker.  I don't know!! I am an over-thinker.
******
Do you remember my telling you about one of my past students, Jose, last week?  Well, I met someone who knows his family very well, just the other day. Apparently he is getting married next month.  So that is good news. I didn't even know he was still in Carlsbad
******
Doctor's info...They have ruled out rheumatoid arthritis.  So now I have to have physical therapy and also follow up with my specialist, to check on my neuropathy and fibromyalgia.
Posted by ChrisJ at 10:00 PM 12 comments:

In my Bible Study this week we met two different characters who each had two things in common.
First there was Tabitha who died unexpectedly and then there was a Gentile named Cornelius.  Both of these people play an important part in the events of the founding and growth of the new Christian church. But I  find them interesting because of the way people who knew them well described them.

The friends of Tabitha were devastated by her death, not only because she was a wonderful person, but also because of the wonderful things that she did.  She was apparently a talented seamstress and made all kinds of clothing for those who were in need.  Cornelius was known as one who feared God  and also gave much of his wealth to those who were in need.

The significance that I see in the lives of these two people is the fact that both of them were not only well known for being good people but also for the good things that they did.

In other words, they didn't just 'talk the talk' but also 'walked the walk'. I believe that Christians should not be afraid of being known as Christians, but if they are truly Christians, the way they live and the things they do should be clear evidence of their Christian life.  They cannot be perfect, but they should be known for being exceptionally kind, honest, generous, helpful, moral and trustworthy.  Not an easy task, but for a Christian, a serious goal for which to aim.


********
It is going to be difficult for me to blog very much for the next couple of days.  My pain medication for my fibromyalgia is giving me some problems, so I have had to stop it for the time being.  I go to the doctor tomorrow and hopefully he will have some solution for me.  In the mean time doing much of anything is difficult.  I went down to see to the cats at the shelter this afternoon but I couldn't stay very long because of the pain.  So if I couldn't work with the cats you know I am having real pain!
I'd appreciate your prayers for an effective solution with no side effects.  In the mean time I will try to keep visiting and commenting. Be back soon.
Posted by ChrisJ at 10:02 PM 9 comments:


Living so near to the Mexican border, 'hacienda' is a familiar word to us.  It is what we call the main house of a ranch or estate.  We took these photos below, last week at the Leo Carrillo Ranch on the outskirts of Carlsbad.   It is one of our favorite places to visit -- quiet and beautiful. 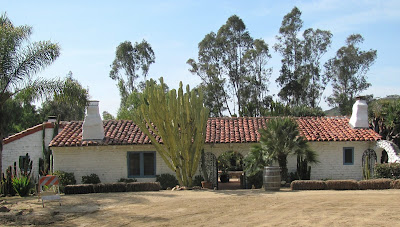 The front of the hacienda 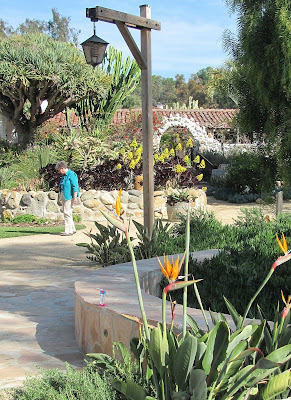 The back view from the patio 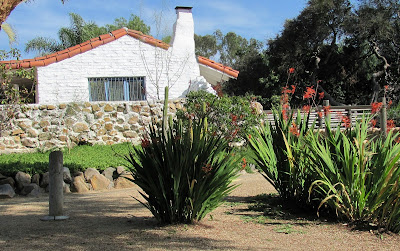 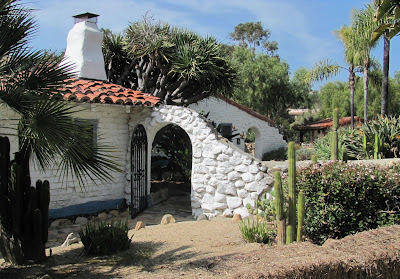 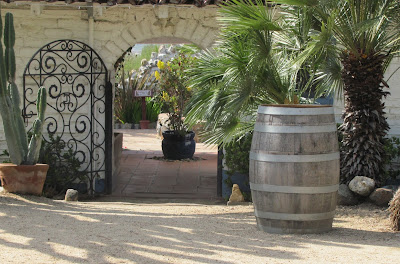 The side views
This place has so many photo opportunity spots and should surely not be missed if you visit the Carlsbad area.  Best of all it's free!
And to top it all off, from forty to fifty beautiful peacocks roam the grounds adding to the beauty. It is rare not to find at least one which will spread its feathers for you. Kay has the best photo of this so I'm leaving it for her to use on her blog. 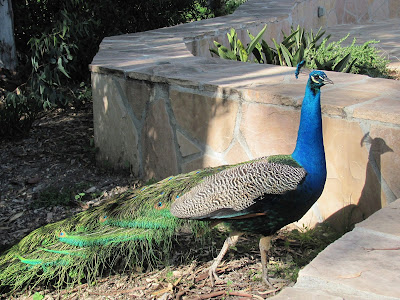 This HACIENDA has to be one of North County's best kept secrets.
The letter 'H' brought to you by Mrs. Nesbitt and her fine team at
abcwednesday-mrsnesbitt.blogspot.com
Up to a hundred bloggers participate in ABC Wednesday so you have to find many among them that are fascinating.
Posted by ChrisJ at 12:05 AM 18 comments:

Especially for you Abe!  I was very pleased with how well it came out with my little Powershot 120.  Did a little digital imaging work on it, but only to crop and sharpen. 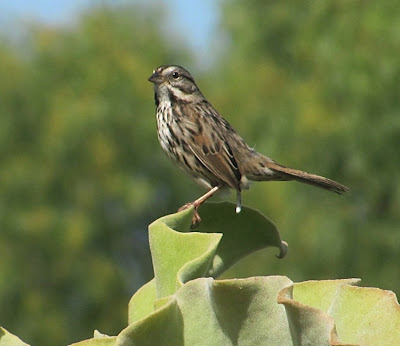 We were down at the Leo Carrillo Ranch and there were many of these singing their hearts out and lots of bush tits. I saw a flicker too.
About my last blog.  I tried to comment on my own blog twice but it wouldn't come up.  So here is what I was trying to tell you :
My sister, Kaybee is 7 1/2 years younger than I.  She has lived in Toronto since the early 1960's.  She does look more like my mother, and I look more like my father's mother.  She has a blog kaybee-patchworkquilt.blogspot.com but has not been too active on it because she too is a writer and has been deep into a book for her denomination. It is almost complete now, so we expect to hear more from her.  Yes???
She returns home in a day or two, so I will post more photos from our couple of weeks together, soon.
Posted by ChrisJ at 2:23 PM 3 comments:

Sorry for the few days of silence.  My sister is visiting, so we have been doing a little galivanting around, but more than that I have picked up a bug -- not the catching kind I think, but I'm  struggling to maintain activity.  So, although I have been able to visit and comment a little, an intelligent post is more than I want to do at the moment.
Two comments that have dominated conversations in the week that Kaybee has been here are-
1  Oh, you're sisters!  I would never have guessed! (Said with a grin).
2. Sorry we couldn't come up with some better weather for you.  (There has been a cold wind and clouds until today, but temps in the 50's and 60's.  Kaybee thinks we are all spoiled.  Their weather is still below freezing.) 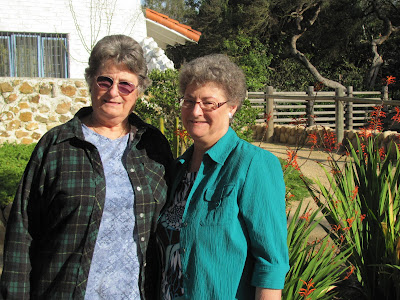 So do YOU think we are sisters?
(I'll be back blogging again soon.  I've got some good photos coming up).
Posted by ChrisJ at 4:42 PM 13 comments: