Sorry no blogs for a day or two. I'm not supposed to be on the computer. Had to go to emergency for bad, bad, pain. Turns out it is my sciatic nerve. Could have been anything from kidney stones to pulmonary deep vein thrombosis -- or something! Came just as all the fires broke out at about 3:00am Monday morning.

We are in a small semicircle on the coast between Camp Pendleton and Del Mar, where there were no evacuations -- but my doctor was evacuated. He was scooting out of the door as I came in. Saw him today. He and his family are safe. The pharmacies are overrun with evacuees seeking medication they'd left behind. Banks are closed, many stores closed because personnel had to go home to evacuate, schools are closed for the week , probably no mail tomorrow and the fires burn on.

The wind truly becomes the "Devil Wind" because with all the canyons, valleys and mountains they swirl around at hurricane force in some places. Temps in the eighties and nineties. We were among the fortunate few who did not have to evacuate, but I kept my eyes glued to the TV -- from a prone position. This patio lady will take photos when she can comfortably move, to show you the "fire-snow" where I usually sit. Had to put out extra water for the birds and poor Bailey is thoroughly spooked because it looks like twilight and the smell of smoke is so strong. Actually the sky this afternoon was a dull orange -- not fire, just sun through the smoke. (Sounds like a song). Nearest fire to us was 15 minutes away, but the worst ones were only about a half hour away in any direction.

I will return with photos as soon as I can sit without pain. 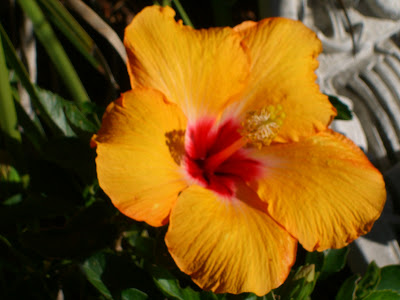 My faithful Vons store-bought Hibiscus is blooming its little heart out in its 6 inch pot. We haven't got around to planting it yet and there are already three more buds on it and this flower! 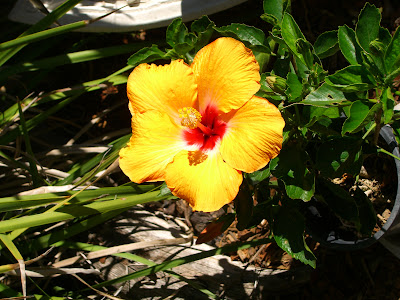 So after taking these photos, I took a look fresh look around as I haven't been outside on the patio for a few days. Too cool. Anyway these are my Friday blessings: beautiful, cool green, and colorful flowers: 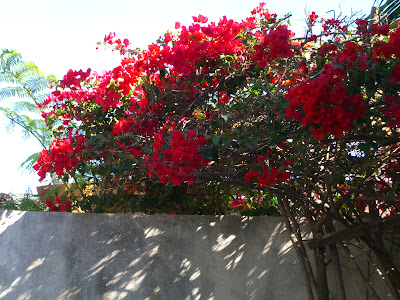 Our Cape Honeysuckle only in the ground a couple of months... 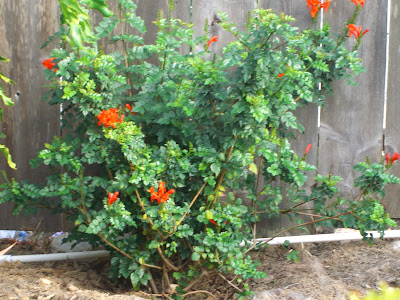 ...our thirty, or even forty year old pink hibiscus. Been here since before we moved in. And no giant white fly this year! 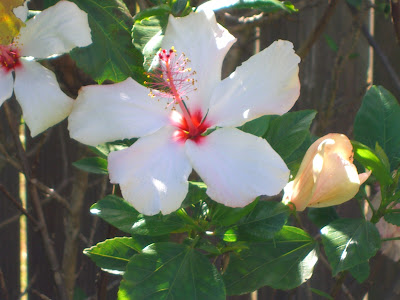 No flowers on the plumeria this year though. But it's looking pretty healthy. 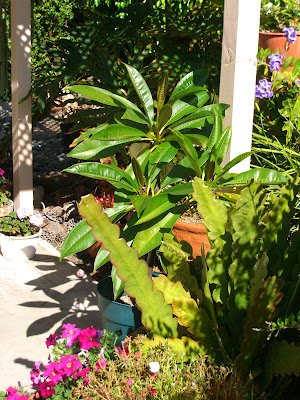 So tonight I put my husband's Macedonia and Bulgaria photos on CD's and ..... Such a strange feeling to see this photo with my husband in it (far right). Strange because having poured over every little detail of the brochure photo of this church in Macedonia in order to make my drawing (see post October 12th) I feel like I've been there. It didn't feel like a real place until I saw this photo and part of me wants to say, Where am I? Surely I was there! 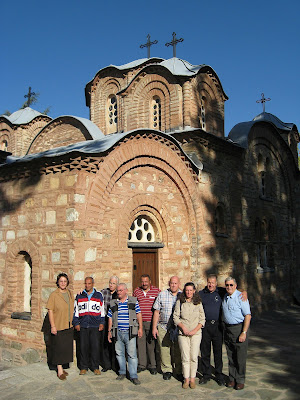 Just a word of explanation. I began the Widget Box counter seen in the panel on the right on October 17th, 2007, but began blogging December 2006 and have posted 117 posts thus far.
Posted by ChrisJ at 1:12 PM No comments:

I think we look pretty happy here...and we were... and are!!

I can't believe I'm smiling so much and look so confident. I hated all the attention and would have been happy to just elope. My sister, as bridesmaid, would have been happy enough to sink through the ground -- she was just as shy as I, and like all bridesmaids, she hated her dress. I won't show it here as she would disown me. I had no idea. I just wanted something in a pretty autumnal color. As it was, it was a flowery orange! You just couldn't get the kind of color I wanted back then. 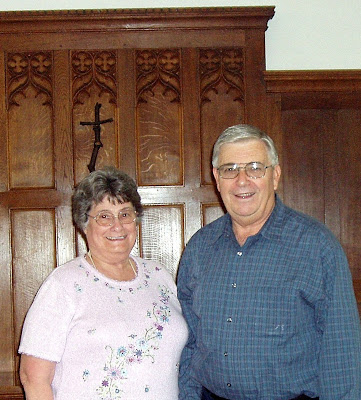 This is where it should have happened: the Chapel at Cliff College -- and here we are just four months ago only a hundred yards or so from where we first met.

I promised I would post the drawing of the church in Macedonia, from where Barry has just returned. I finished it last night, (probably 7 hours total). For colored pencils, it came out quite well. The scanner couldn't pick up the more pinky tinge to the building and foreground. In case you can't read it, the title says "12th Century Church of St. Panteleimon, near Skopje, Macedonia." 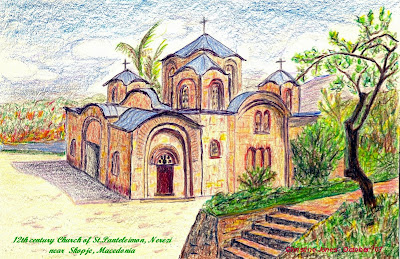 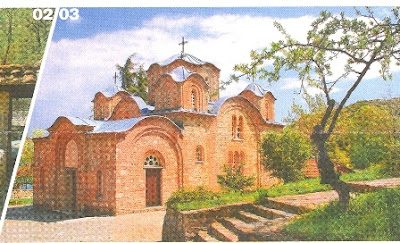 This is the original brochure picture.
You can see what I mean about the color.

Then I have to tell you that 'The Bird Lady of the Patio' as I have been dubbed, has been visited by our 'humming bird of the water fall' Of course I didn't have my camera with me. I wasn't sure I how long I would sit outside as the wind has been cool for the last couple of days. But it wasn't too cool for him. He got into the stream of water and keeping his head high he stayed there quite a while (for a humming bird). I think I read somewhere that humming birds don't perch, but ours certainly do. This one perches on the rock just above the stream, then submerses his underside in the stream of water and flickers his wings a few times to splash the water all over himself. He then flies up onto a close-by branch and shakes and preens himself. He is an Anna's humming bird, I believe.

We also had a short visit from a white crowned sparrow. The first of the season. According to the experts they are supposed to be here all year round, but I only see them in the cooler months. I have put out some more seed, so maybe I can get a photo of him tomorrow.
Posted by ChrisJ at 3:53 PM 2 comments:

Well I've finally figured out what widgets are. I've only been blogging about 10 months so it's about time.

The first two are about cats. The first one I've seen several times before. The second one is named for Sooty our cat from 3 cats ago.

And the third is a shameless commercial for my book, "The Tale of Robin Lyth" based on Mary Anerley by R. D. Blackmore, author of Lorna Doone.

Barry came back from Bulgaria and Macedonia yesterday where he has been helping some of the evangelical Congregational churches over there -- especially a Romany one in Skopje, Macedonia. Tomorrow I will post a drawing I have done since he got home of one of their very old churches near Skopje. I took it from one of the brochures he brought home.

This must be short as I have already spent hours on the computer trying to figure out this widget thing.

MY POEM FOR POETRY WEEK

It's a bit long and the print is small but I have been working on this for years, trying to capture the spirit of the place that captured me. So here it is: 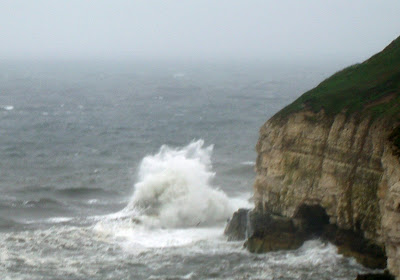 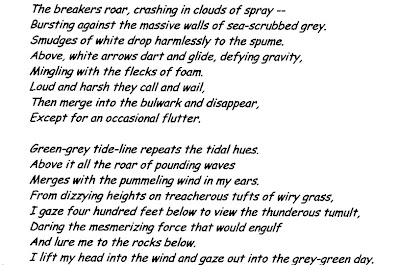 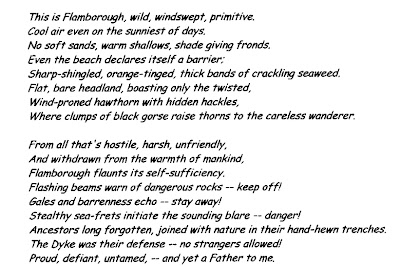 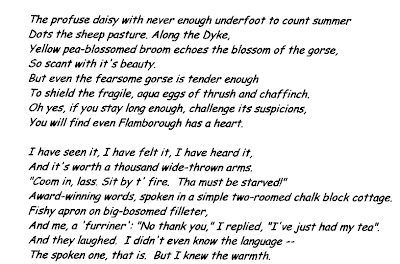 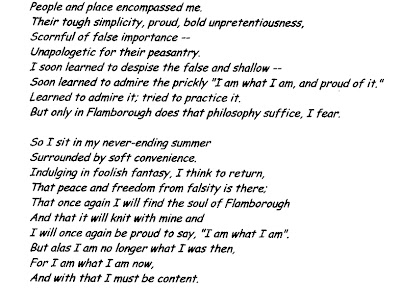 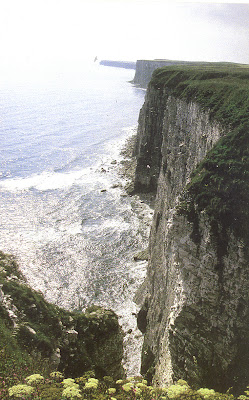 The California Towhee (is it 'tow' as in 'cow' or 'tow' as in 'toe'?? I don't know), has been visiting us regularly every day but has been too quick for me to take his photo. At one point I think we had a Mr. and Mrs. Towhee, but I've only seen one lately. Anyway I managed to get a few fuzzy photos, but nothing worth posting, but I got him today! Notice he is mostly brown with a reddish tinge under his tail. On his neck he has a small speckled patch and that area is reddish brown also. 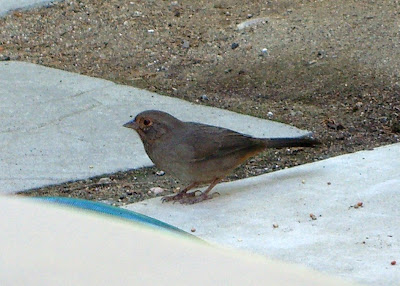 I have been sitting out on the patio every day for almost two weeks. The weather has been gorgeous and I have done a lot of reading and writing. At the same time I keep my eyes and ears open. The Wilson's Warbler has been back every day since I last took his photo. But there has been no sign of goldfinches since before Mother's Day, which is when I put our thistle feeder up. But we do have a couple of pretty fat house finches who have had the patience to peck away at the thistle seed. In addition I watched about 50 or more (I stopped counting) crows going back to roost late afternoon, yesterday. I think they roost in a copse of eucalyptus trees not far away.
Posted by ChrisJ at 7:33 PM 5 comments: