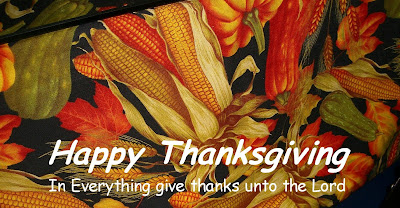 I was going to post this the day before Thanksgiving, but then I thought that perhaps many of you would either be traveling or very busy getting ready for the big day. Then it would be old news by the time you read it. So since we leave in the morning and don't return until the 5th here are my greetings to you. You know, I will really miss keeping in touch with you all!

Have a wonderful Thanksgiving--
"...singing and making melody in your hearts to the Lord, giving thanks always for all things to God the Father, in the Name of our Lord Jesus Christ."
See you all after the holiday!

SIXTH PICTURE IN THE SIXTH FOLDER

I have had to fudge a little on this task sent to me by Wanda. I don't usually participate in these things, but Wanda's my blogger role model. The problem is I don't have six pictures in my sixth folder, so you will have to settle for my fourth picture in my sixth folder or my 2nd picture (making up the number of 6 pictures) in my seventh folder. So here goes: 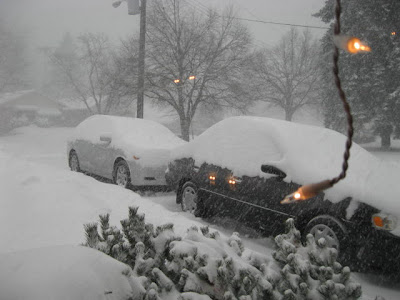 Snow in Toronto last year at Christmas time.
Taken by my sister from their living room window.
Did you really want to be reminded of that much snow so early in the winter?
******

Second picture (making six in all,) in my seventh folder: 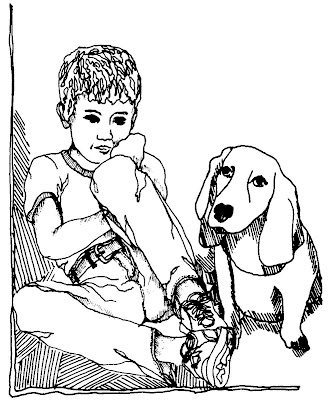 A graphic from my upcoming book, (hopefully) that SHOULD be out in the next three weeks. No, this is not my drawing, but I do like it.
"Lord, I Want to Tell You Something"

There's been a lot of heart-ache, frustration and mis-communication over the past 10 months in my endeavor to get this published how I really want it to be done. It should have been out in July! By the time we get back from our vacation coming up it hopefully will be in my hands. 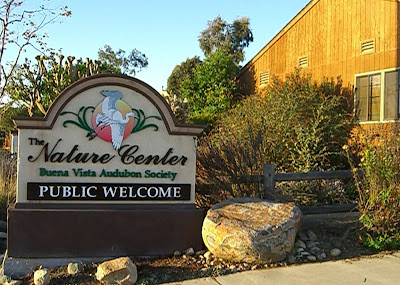 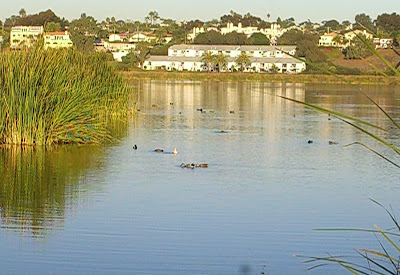 BV Lagoon is really a a large natural preserve in the midst of the city. Highway #5 passes very close by, to the east, on its way to either Los Angeles or San Diego. Pacific Coast Highway bounds it to the west. This is the old north- south highway 101 which existed before the freeway and follows the coastline down to San Diego. I has lots of beach spots on the way down. Highway #78 to Escondido bounds the lagoon on the north side. 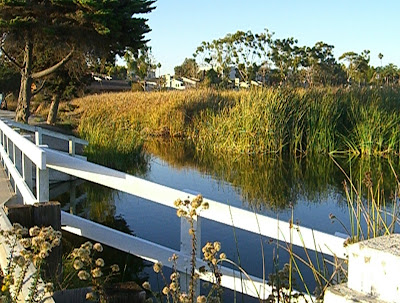 It is amazing to me that in the midst of all the hustle and bustle of traffic and city life, all kinds of birds, from an occasional pink flamingo, white and brown pelicans to any number of ducks and water birds, are busily going about their business on, in and around this lagoon. This is a vital stopping off place for migrating birds. 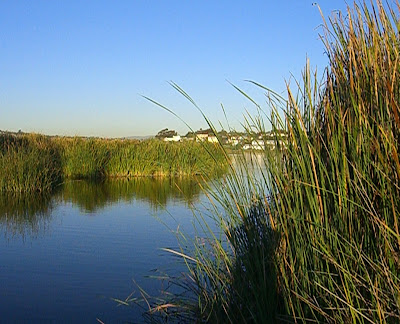 In addition to traffic there are some beautiful homes and condominiums, several shopping plazas and strip malls, all within sight of the lagoon. 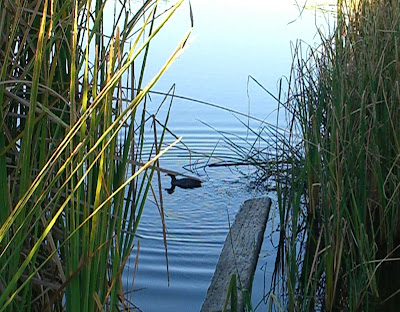 There are a few trails that wind through the sedges -- or bullrushes as I call them, and a couple of places to stop off and see what birds there are. You will always find a coot or two. There is also one small fishing area on the west side where you can cast a line and ignore the traffic whooshing past behind you. The Audubon Society maintains the Nature Center set on the north side, (which is actually in Oceanside). There are not as many trails as there used to be. The lagoon silts up and many many rushes grow thickly in it. It was once dredged about 15 years ago and it looked a sorry sight in my eyes, with just clumps of dirt islands. It looked like it had had a bad haircut. But I guess it has to happen every so often or the lagoon would just totally fill in. 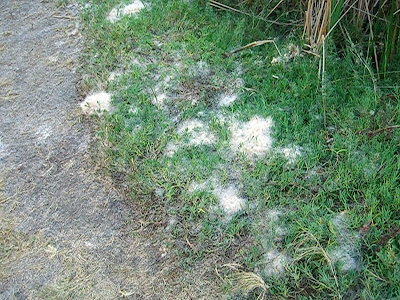 School children come down to see the Nature Center which has some very interesting things in it. Then they borrow binoculars and creep quietly along a trail to see what birds they can see. This fluffy white stuff (above), is here and there along the trail. It looks like ideal material for nesting purposes. But what is it? 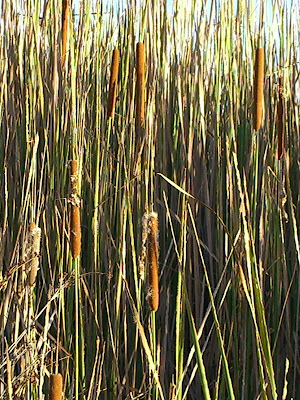 Well I told you there are bullrushes and here they are. Such fun to pull apart! They look like hot dogs and they are all furry seeds inside like a dandelion. 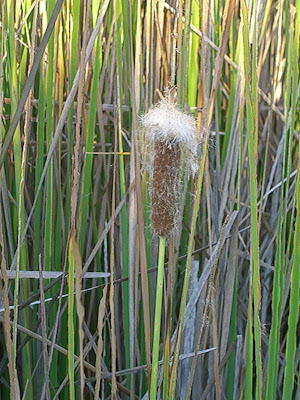 I don't know much about water fowl and I keep thinking I must come down here to learn to identify some. We live only a couple of minutes away. But somehow, even though we are retired, there doesn't seem to be much time to do that.
Posted by ChrisJ at 9:19 PM 7 comments:

Moth arrived home late afternoon on Tuesday. He had been to Portugal and Gibraltar for some church conferences. As we drove home this was the sunset! Not digitalized I promise! 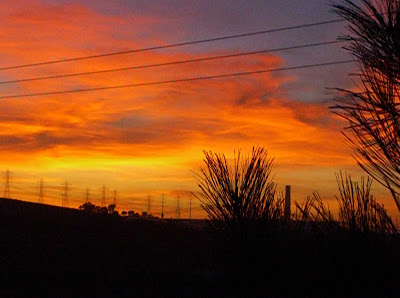 The sky was changing every minute, but even after an 11 hour flight, Moth turned down a road towards the sunset so that I could take these photos. 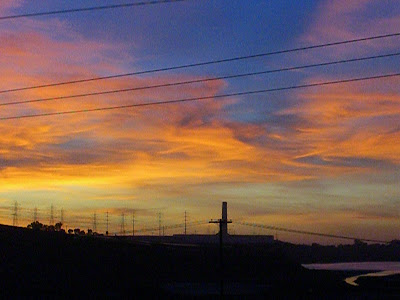 Unfortunately all the power lines were in the way, but the skies were still amazingly beautiful! 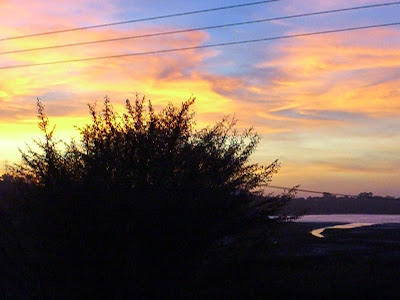 >>>>>>
On Wednesday, I had been working at the church office and I was heading home. Once again there was another gorgeous sunset, but instead of photographing it, I caught sight of the full moon rising in the pink sky made by the sunset. I almost missed it because the sky was changing so quickly and I had to find a safe place to pull over and take this photo. 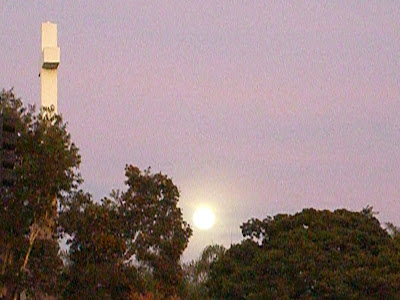 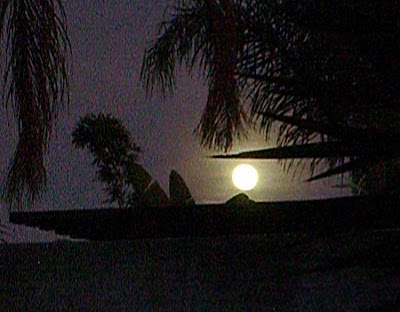 By the time I got home I was able to take the photos above and below from the back yard. 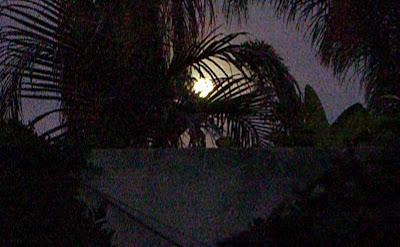 Tonight we had another gorgeous sunset!

This is our typical October/November weather. The sunsets were late arriving this year. We are having another Santa Ana weather condition from today through Sunday. The temperatures will be hot and the humidity dry, but fortunately the winds will not be so bad -- so they say. The danger with the winds is, of course, fire.

Came home one day to find the fire engine in front of our house. Don't panic. The fire station is at the end of our circle and there is a convenient fire plug outside our house. I think this was just a training session for a new fireman, but it gave me an opportunity for a good photo. 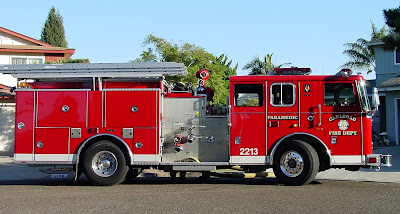 When we first moved here thirty-five years ago, there was a good sized vacant lot at the end of our circle and it stayed empty for many years. The boys used to play baseball and football (their version) there. Then we heard that a fire station was going to be built there. At first we were a little concerned that property values would decline. But they built the station in the style of the houses in our area. 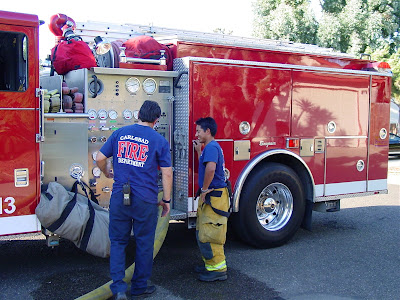 Now, I have to tell you that they are good neighbors to have! They do not turn on their sirens at night, and in the day time they wait until they are on the main road. It's a good security measure for our street because there is always somebody up and around at the fire station. Since the bad fires last year we are very thankful to share our street with them.

TWO MORE ATC'S
This first one is based on a newspaper photograph taken of some Hindu women bathing in the River Ganges, as is their custom.

I was impressed by the reflections of their brightly colored saris. The photograph was probably better, but it was an interesting experiment. I want to practice drawing water more. 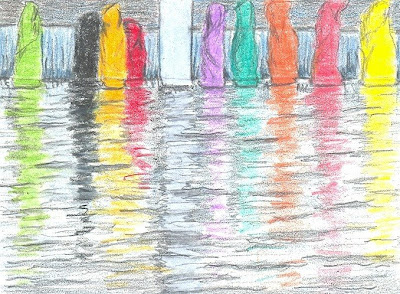 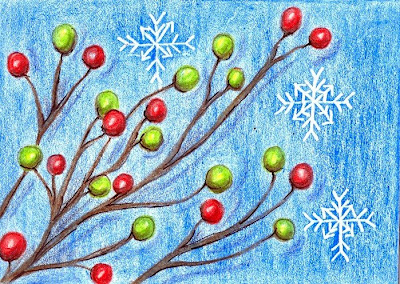 CHRISTMAS BRANCHES
This one too, was an experiment. One thing you can't do with Prisma colors is make something white. Gillian of The Faded Rose told me this secret. Place a thin piece of paper over your drawing and then draw whatever you want white onto the top piece of paper. Press hard so that the imprint will come through. Then remove the top paper and color lightly over the imprint. Presto! White snowflakes! This too needs more practice.

Next we are going to visit the Buena Vista Lagoon. Stay tuned.

Get out the Wet Noodle!!!

I was just looking over my last few posts and realized I'd made a horrible error! Truly horrible to this English teacher and ex-high school principal! I have corrected it now and I'm tempted not to tell you what it was, to see if anyone else had caught it. I think my sister might have, since she is also a writer.

Oh, oh, oh! I abjectly apologize to all my former students, especially those whose hated receiving papers from me covered in red ink! (They're probably not reading this old fashioned blog any way).

By the way, can a blog be old fashioned? After all, blogs are only a few years old.
Posted by ChrisJ at 11:06 PM 6 comments:

Did someone get into my blog of yesterday I wonder? It was expressing my disappointment that when we are supposed to be at our most democratic we have too many derogatory comments, stealing of signs etc. But this we know, that God is control over all. He raises up leaders and brings them down in His own good time.

This was the gist of what I said but most of it was erased sometime over night leaving just a couple of lines and some garbled stuff. Later the whole thing was gone. I wondered if Google took it down, but I assure you it had nothing offensive in it. I didn't even mention either political party.

I did have one comment from someone which must have been written before the whole blog was taken down. It was a pleasant comment.

We did have some nasty stuff going on down here, so who knows! Anyway I removed my bumper sticker today, which was in support something. I don't need someone trying to intimidate me when I'm driving. That can happen without election hype.

It's a sad commentary on some people's idea of freedom of speech.
Posted by ChrisJ at 11:36 PM 7 comments: 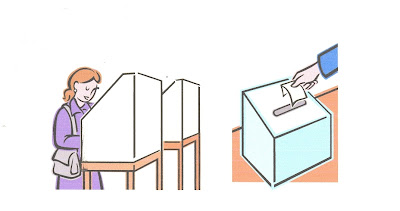 I can't tell you HOW GLAD I am that the elections are finally over. I thought the day would never come.

Birds, Singing in the Rain


This is my first video EVER so please excuse the quality. I wouldn't have posted it except I actually caught the birds singing their heads off in the tree right after the rain -- which lasted all of 5 minutes (the rain that is). See post below. There are at least 25 birds in this tree although you can't see any. I must try videoing again and get good at it. I didn't think it would be so easy.

What is that weird wet stuff falling from the sky??? Oh! It's RAIN!! I'd almost forgotten what it looks like. It's hard to photograph rain but you can see it pouring from our down spout, and a little glistening on the patio table. 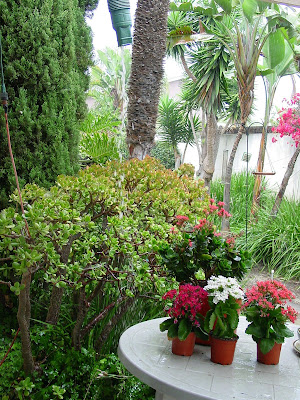 This is the first rain we've had since April. Such excitement! You can see the little white rain drops against the greenery and along the patio beam. The birds were delighted! You should hear them chorusing in the bushes even as I type. 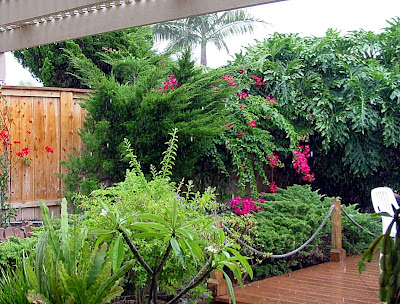 This photo below, was taken yesterday in Magee Park, Carlsbad. It was my friend's son's 40th birthday. I stopped by for a little while and it was just a beautiful day. 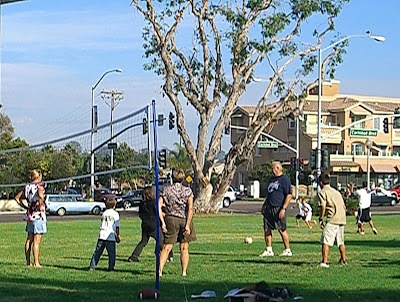 The birds may be loving it, but this was Bailey's response. 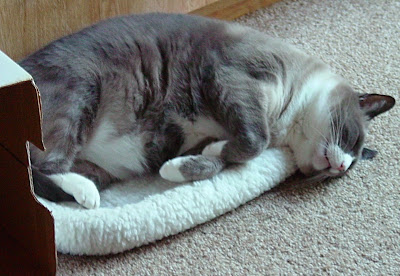