When we bought our house last year, one item we had to deal with had to with stained glass.  The previous owners had installed a very nice understated stained glass window design.  The only problem was that it incorporated their initials -- which of course are not the same as ours.

There are two large windows on the front of the house.  Both are inscribed with this logo.  This photo taken from the inside looking out of one of them shows the initials.  We found out where the previous owners had had the window designed and installed and looked into replacing the center panel.  Turns out we had to take out the whole section just to remove the initials. Originally we thought of replacing them with our initials, but when we calculated the cost of the whole process for both windows, we decided that was one expense we didn't need along with all the other moving costs.

So this is what we ended up with for the time being: 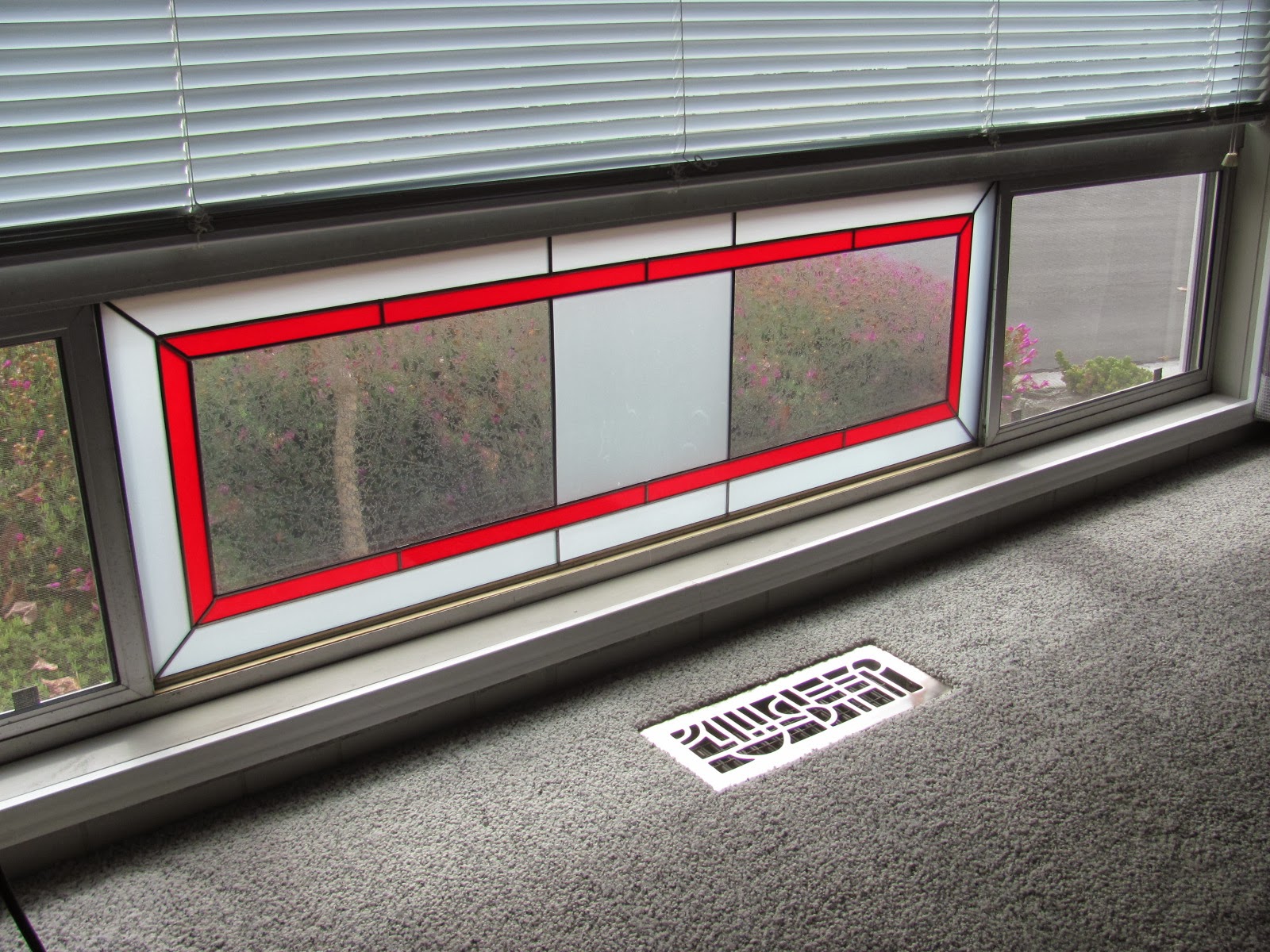 Eventually we decided we would like to incorporate the sign of the fish on that center pane, since we are a Christian family and want to identify ourselves as such: 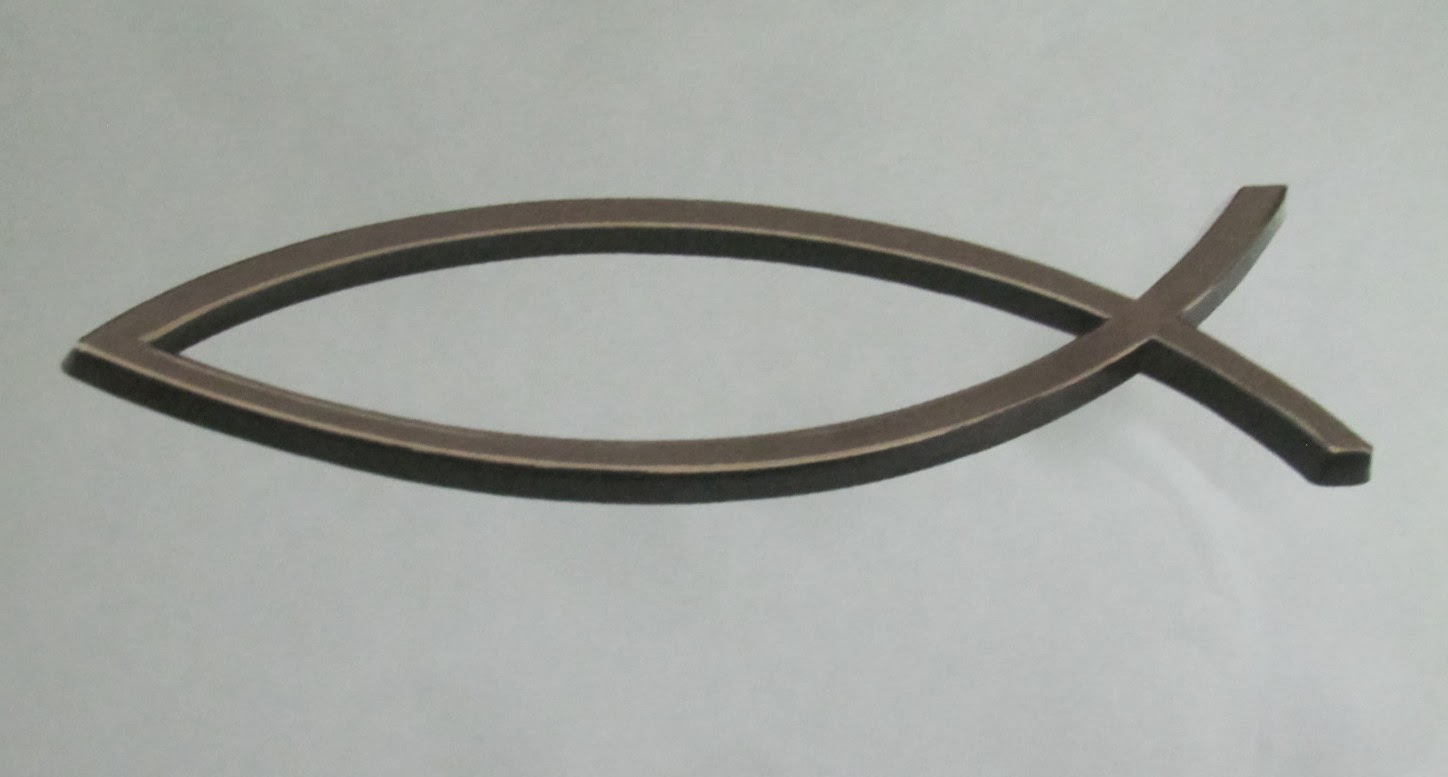 I am looking around to see what would be the most effective and least expensive way of incorporating the sign of the fish into our windows.  I don't think it will be by means of stained glass, but you never know.

This is my contribution to Friday, my Town Shoot-out.  To see more contributions and some beautiful stained glass please click HERE.

Well to tell you the truth I'm about all-computered out!!  Had to buy a new lap top and that was bad enough, then had to transfer everything from the old to the new.  That wasn't such a problem.  I managed to to do it over a few days.

BUT THEN...trying to figure out Windows 8 has been driving me crazy!  Why do they do it???  It took me a while to figure out Windows 7, then just as I am feeling comfortable and at ease on that, along comes Windows 8 and it feels like they changed everything!  It took me two days to figure out how to download five photos from G mail into My Pictures and to find Photo Gallery.  Spending hours on the computer every day doesn't do much for my usual happy disposition, I'm sorry to say.  Who are these people who think everything has to be new and different?!!

So by this weekend I was about ready to quit computers for good -- never mind blogging!  But here I am back again.  I'm sure 'they' count on  us being addicted to them, so we won't give up.

Well, on to happier things...

Yesterday we had a gorgeous sunset -- one of many we have had in recent weeks. 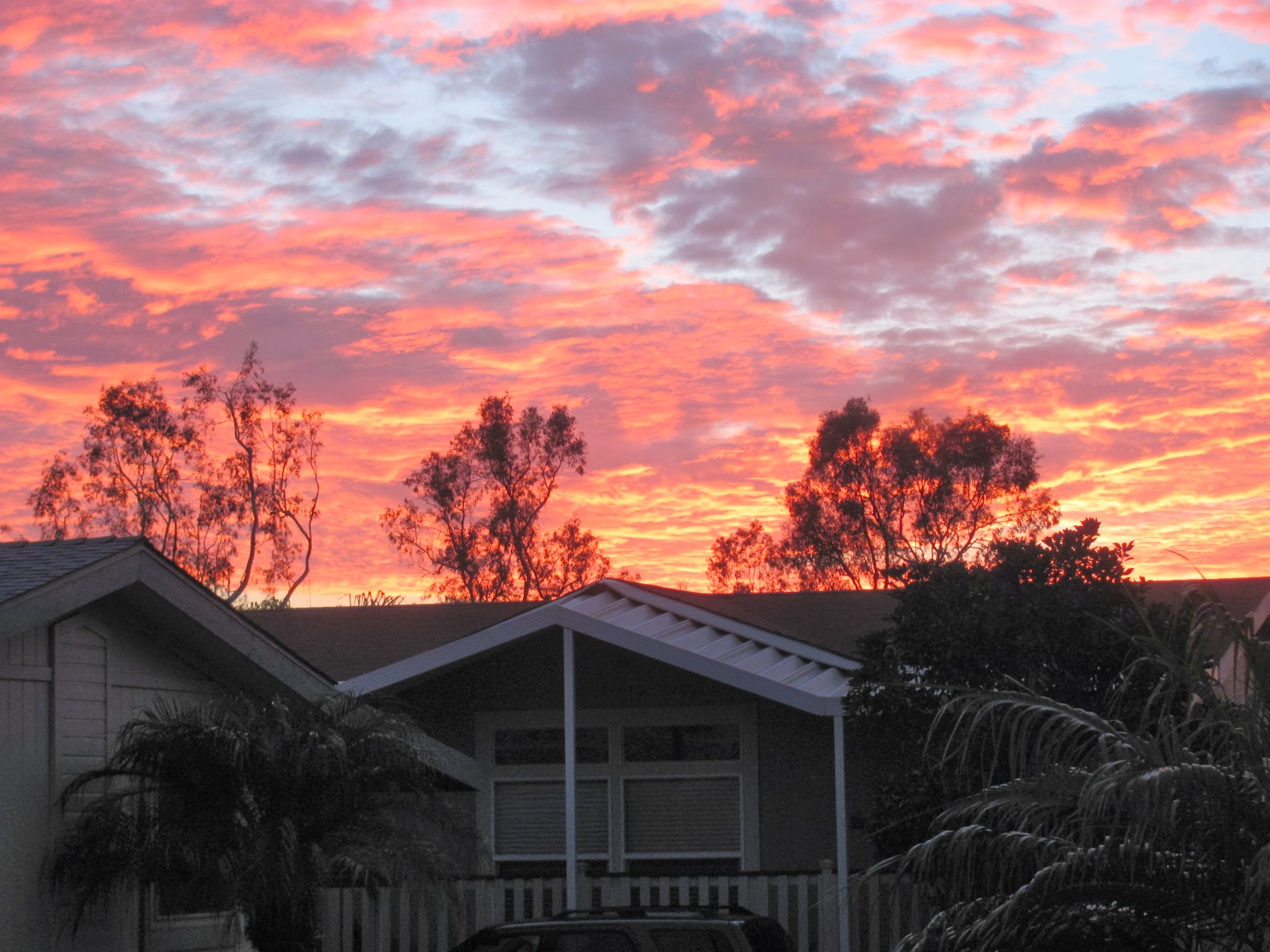 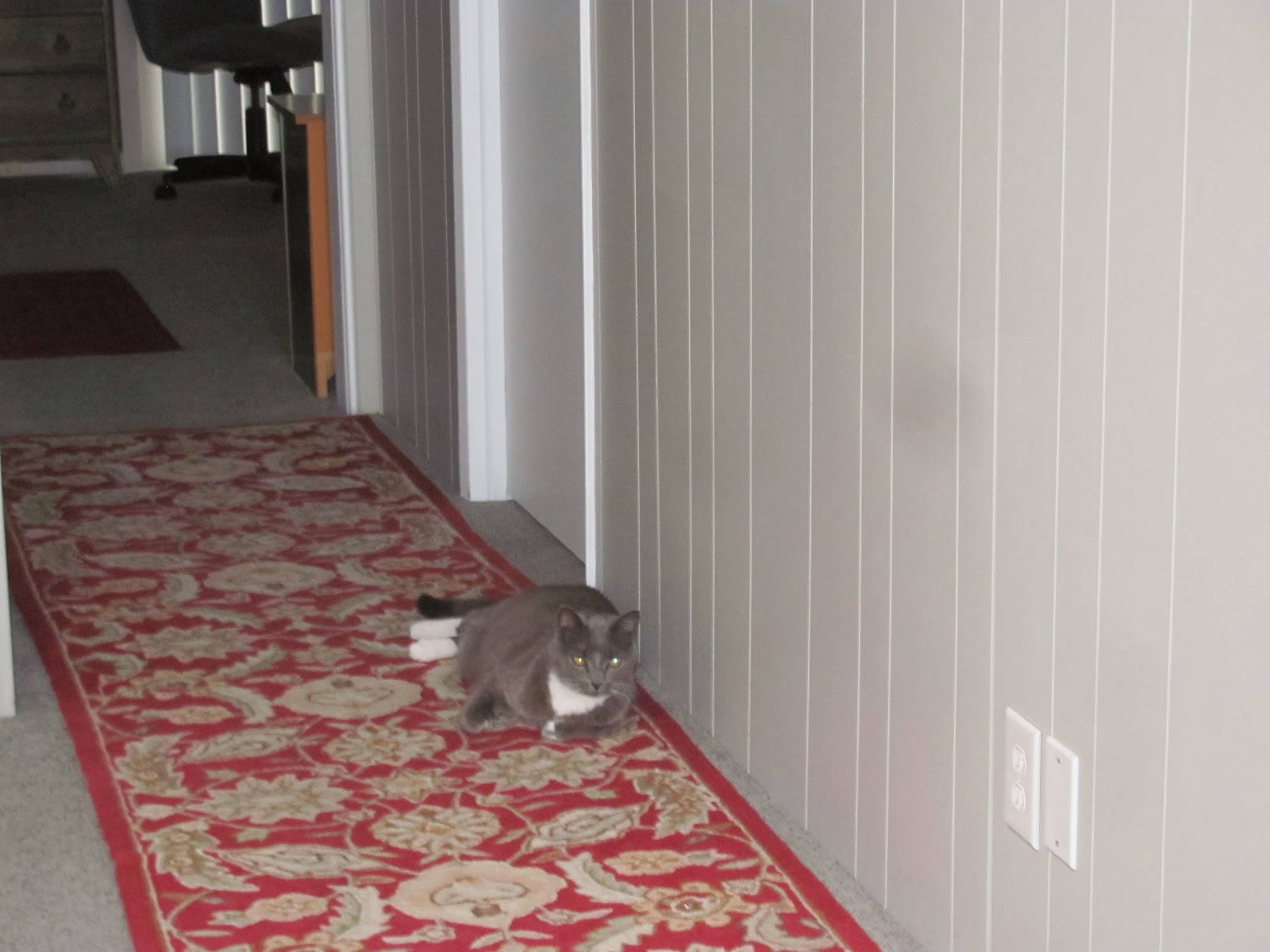 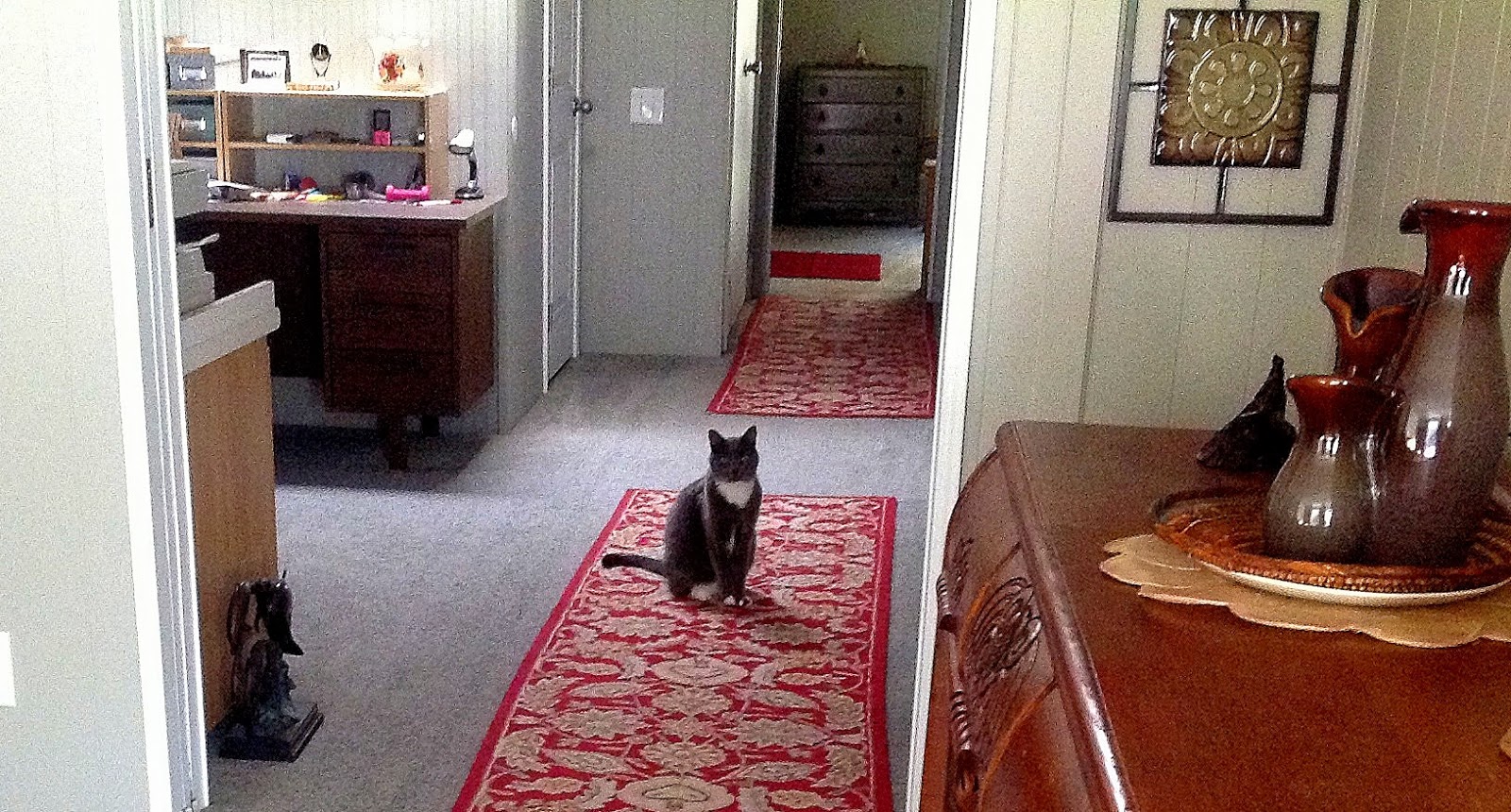 Two more shots of Scruffy keeping watch over Kaybee's room waiting for the second she opens the door to dash in and take possession.  (She's allergic to cats so we had to TRY to keep him out of her room). 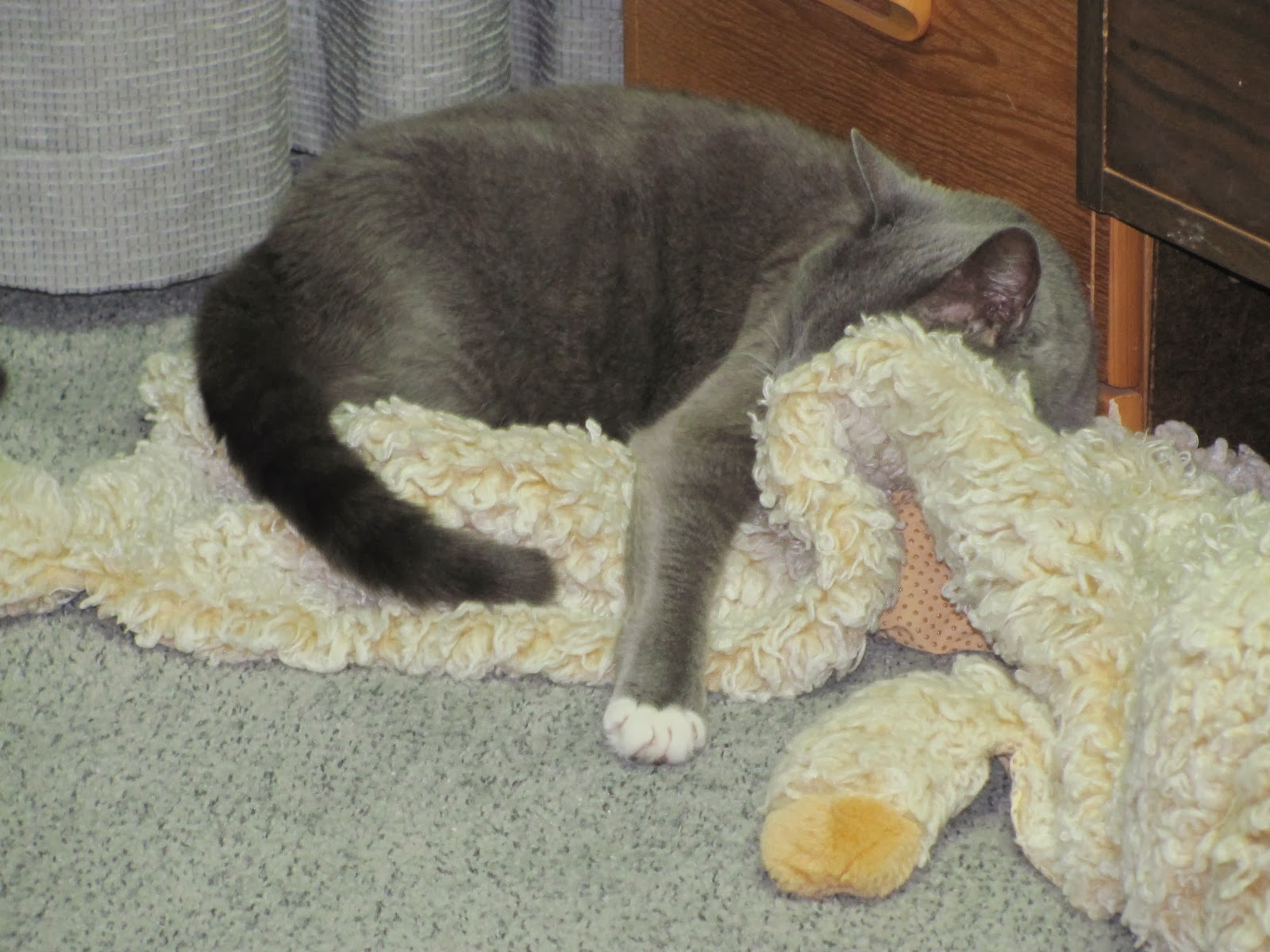 Later, snuggling up with his sheep blankie, exhausted from keeping watch and giving in to sleeping in the office area. 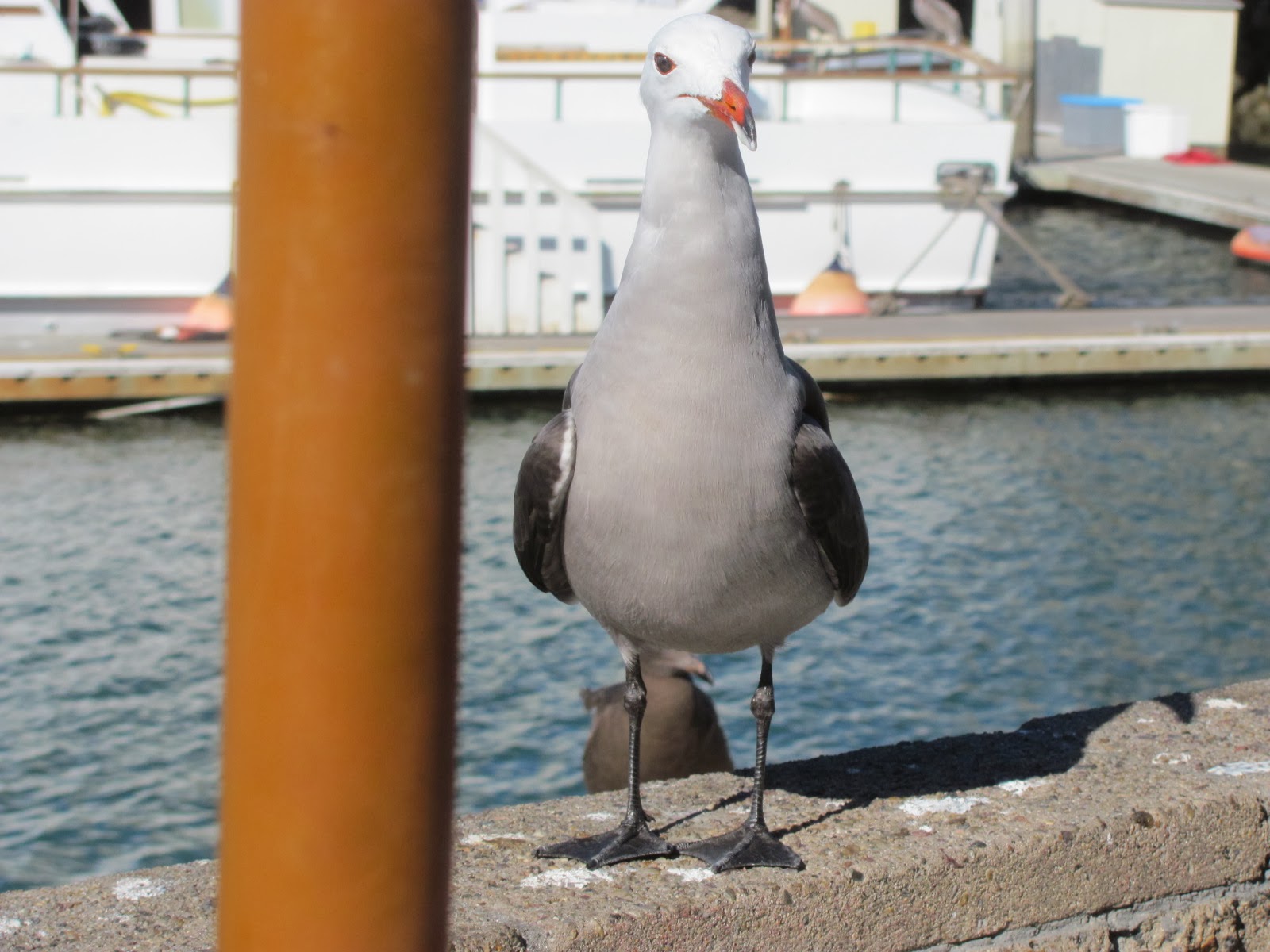 A rather insistent seagull waiting for scraps from Kaybee and I as we ate fish and chips at the harbor.  We don't ever feed them as that brings penalties of their own kind, but they are smart enough to know that bits and pieces get dropped.  We saw a seal pop up right here as we ate but I couldn't get my camera out in time.

Later after our refugee from the snow and ice returned,  we did a Skype on Ontario's Family Day.  (What a great idea for a holiday!  Even the kids get a day off school.)  Here you can see Moth on the computer screen, a photo taken by one of our family as we Skyped.  This was my first ever Skype.  So it was a landmark.

************
I've still got a few more bugs to work out with Windows 8 and Windows Chrome but I guess I'll be back.  Incidentally, I am still visiting and commenting.

FAMILY FLOWERS and BIRDS
While my sister was here I did a little more artwork.

This theme began initially when Son #2 and  his partner to came visit from Boise at Christmas time.  V. admired a small teaspoon rest that I had bought in Flamborough many years ago.  She really liked the two English robins on it.  English robins are quite different from American robins. Since I knew she had a Birthday coming up soon, I decided to draw them for her on a home made birthday card. 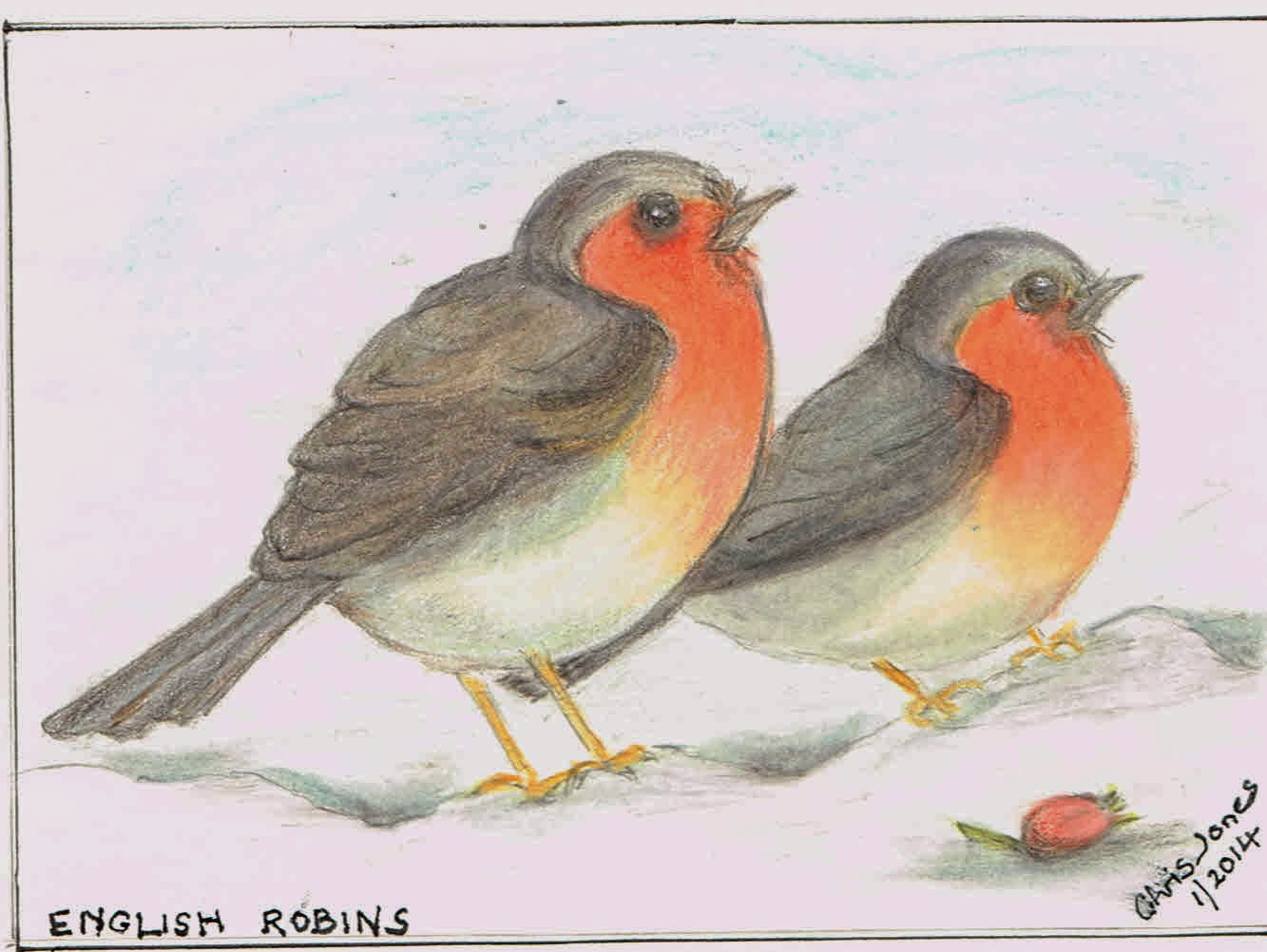 Then when Kaybee arrived she asked me to draw some pansies for her in the same format as  some other small ones (4x4") I had done last year. 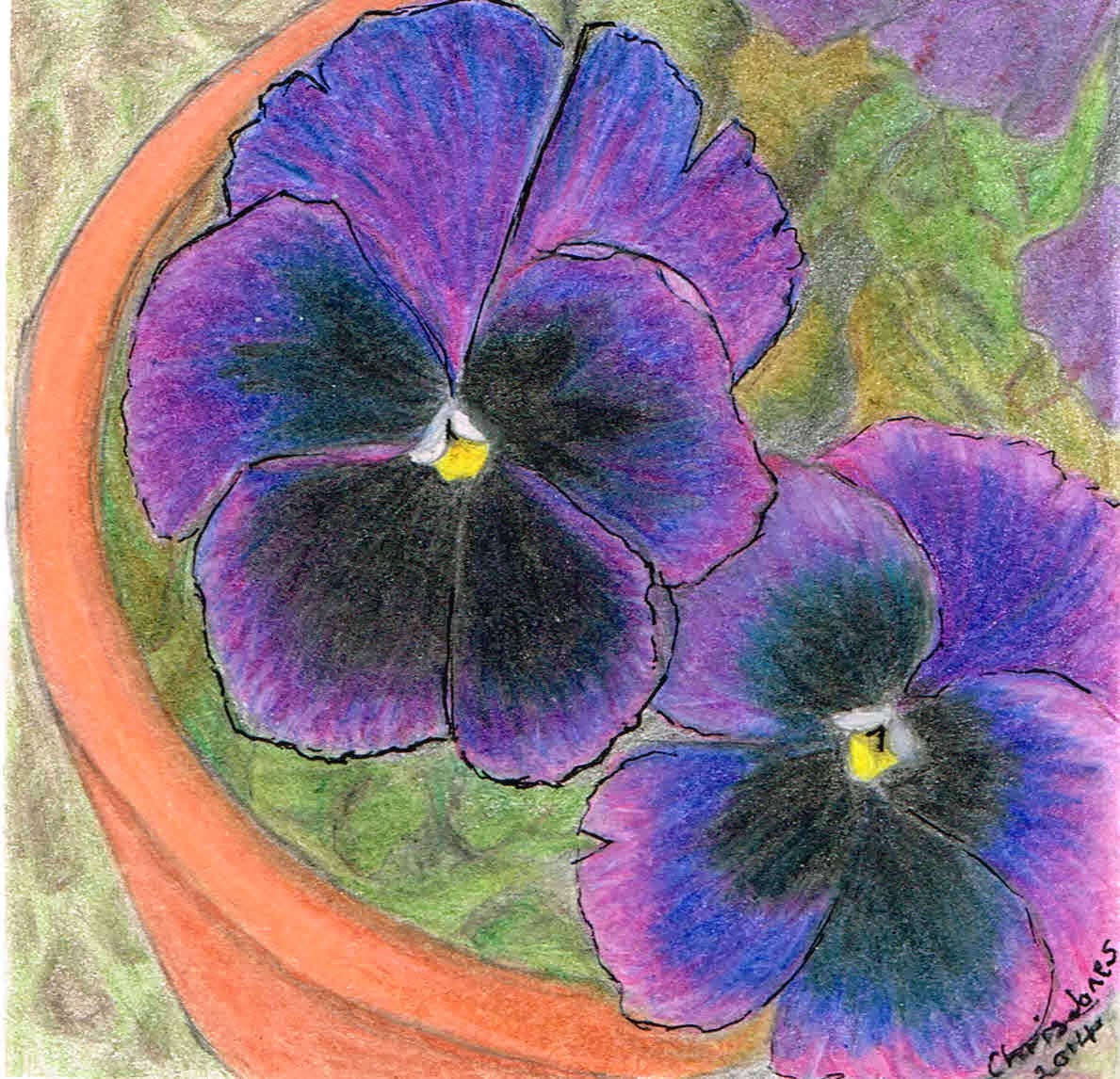 That set me to thinking that maybe I should do something similar for Kaybee's daughters.  So for one daughter I did this: 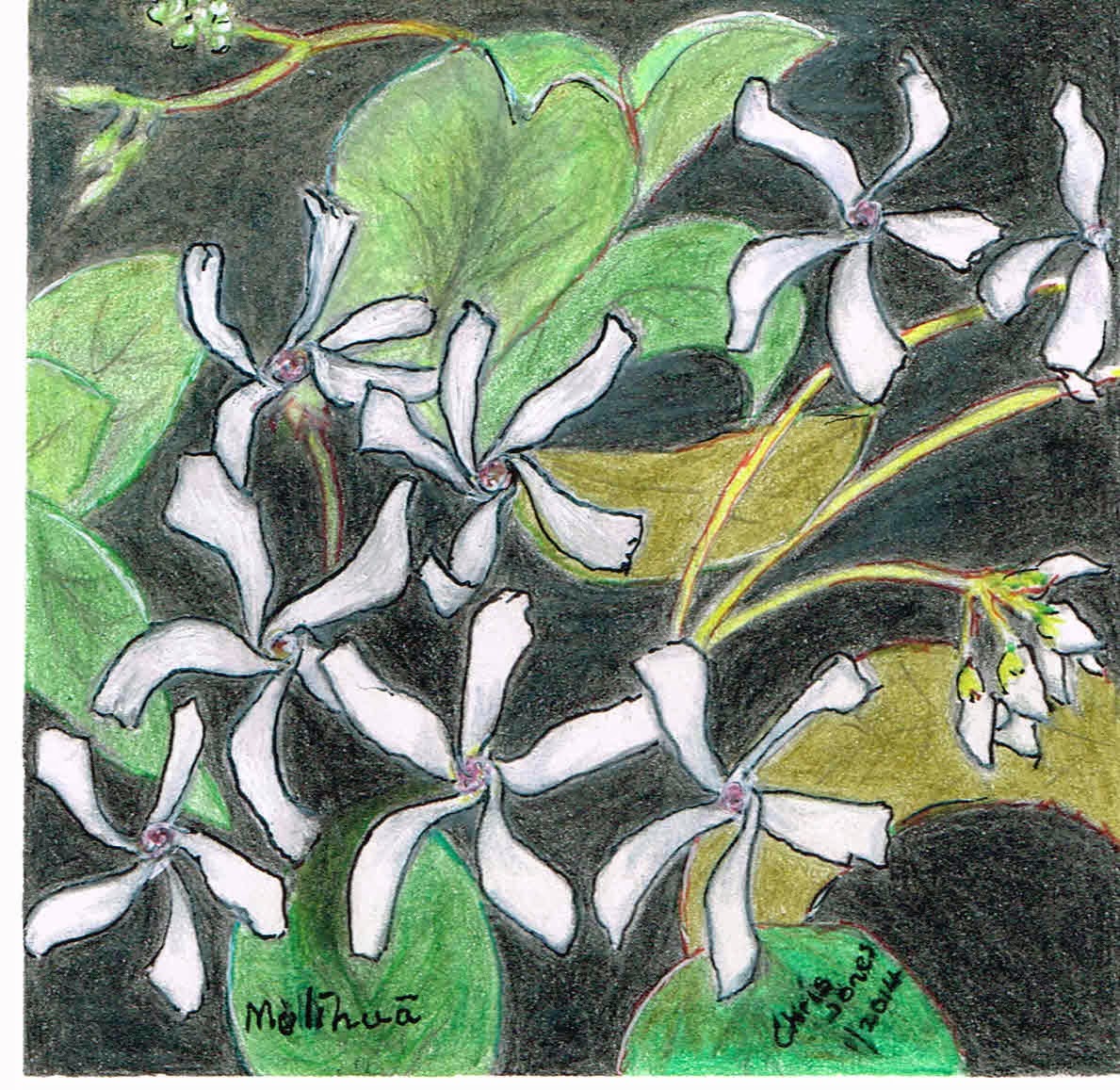 ...because it has some personal significance for her.

For the other daughter I chose to do this.... 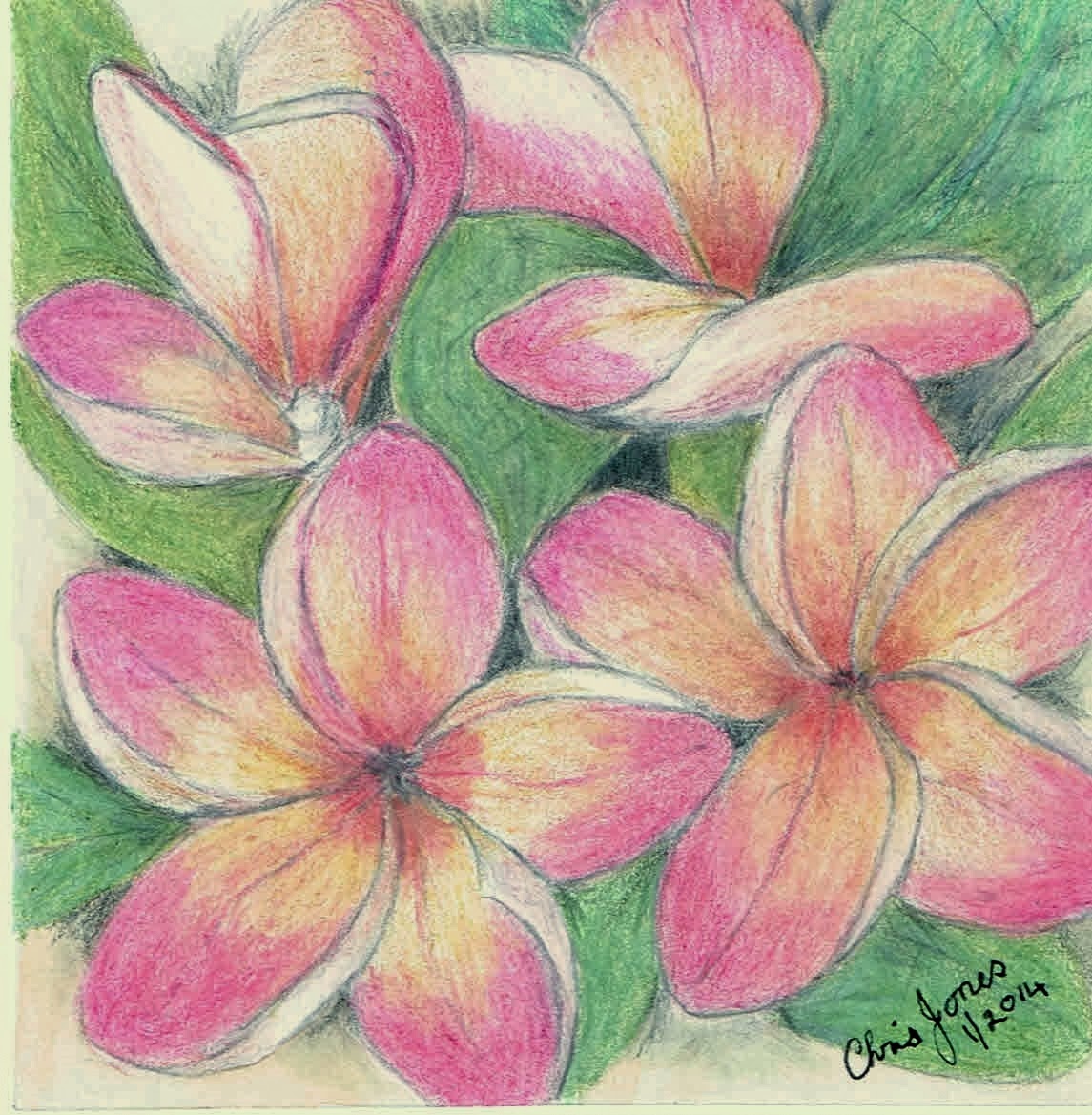 I don't know this daughter as well as I know Jasmine, but after much thought I chose the fragrant, but rather shy or retiring, pale pink plumeria.  I laugh now because I was way off. A  few days later Kaybee and I did a Skype call for me to meet 'Plumeria' and her family.  In actual fact Jasmine, Plumeria and I have many things in common and being shy and retiring isn't one of them, not now anyway. I  do remember Jasmine as being very shy as a child, as were Kaybee and I.  I don't know about Plumeria because our paths haven't crossed until now and I haven't had the chance to ask her.

One thing we all share, including Kaybee and I, is that we have all had a complicated background and upbringing.  But out of the complications the Lord has brought all of us 'girls' together and is in the process of producing new fresh blooms that have nothing to do with horticulture, genetics or evolution. It is an amazing story and one day one of us will write it.

So from flowers back to birds again. I am including this painting I did a couple of months ago of and English chaffinch. 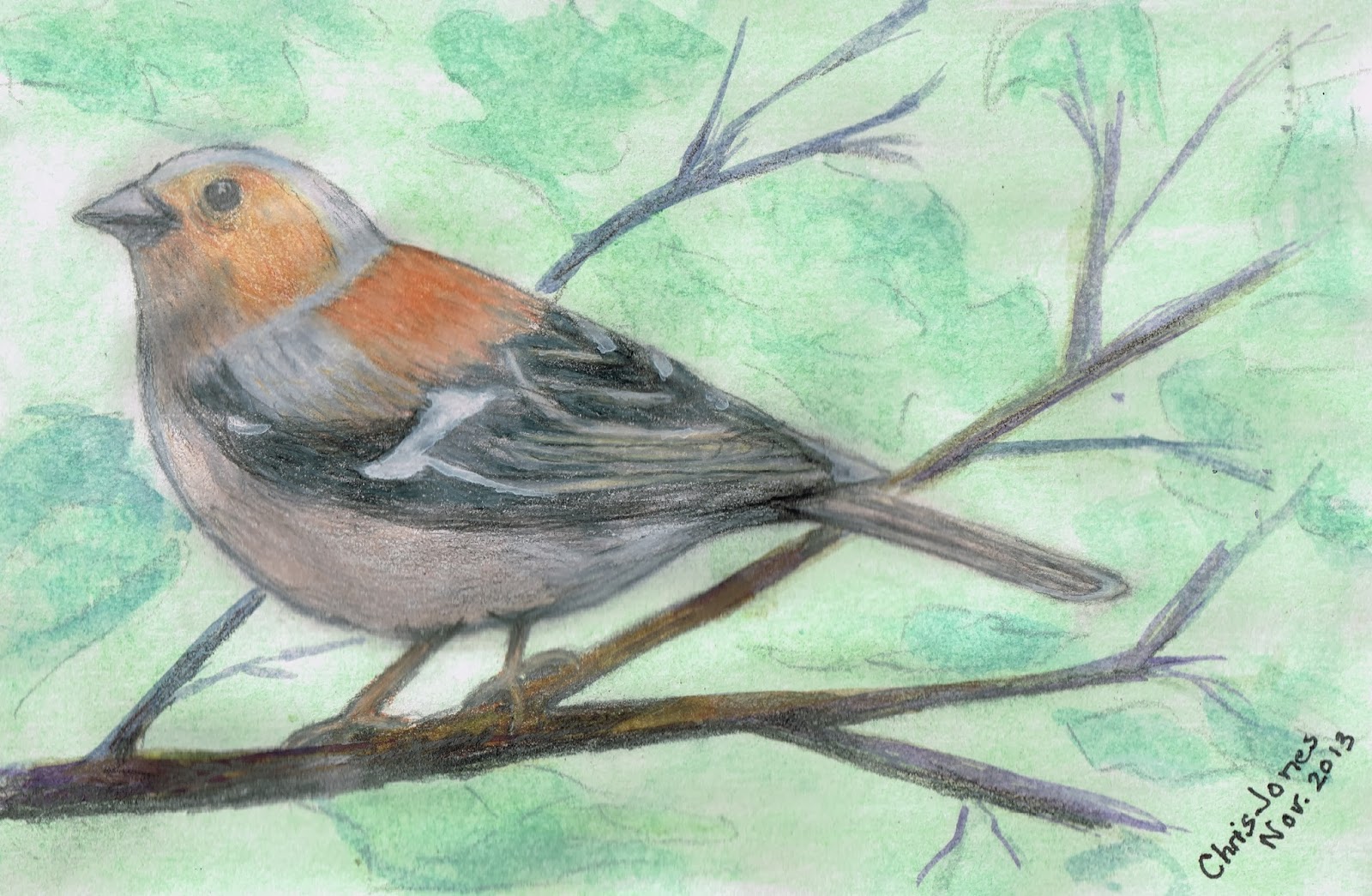 A word of explanation is needed here for those who may be participating Mrs. Nesbitt and Roger Green's ABC Wednesday http://abcwednesday-mrsnesbitt.blogspot.com/  I am taking this round off because first, I am running out of photos and time to take new ones, and secondly because it has been hard to find time to do any painting.

By the way, if this is your first visit, my 'paintings' are done with Prisma Colors colored pencils.


ENTRANCES....
I'm still trying to configure my laptop so this photo, though about entrances, is not really about my town.  I'm not sure how long it will take me to retrieve the other photos in my files. So.... 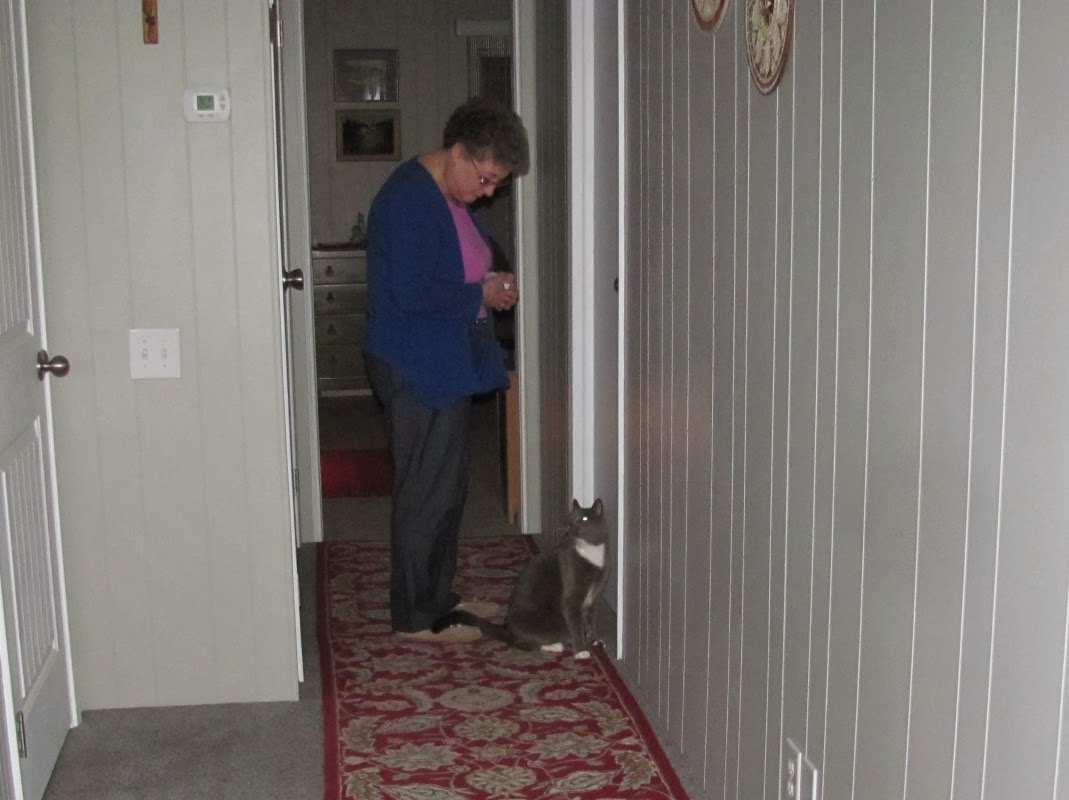 Don't let that sweet pleading look fool you.  That is one very stubborn cat!

You know, of course that cats can't stand closed doors.  Well my sister has been staying with us for the past month and she is very allergic to cats.  Consequently we had to close her bedroom door because Scruffy, (our CAT)  has been in the habit of sleeping on the bed in her room for part of every day for the past few months.  Before she arrived, we tried hard to coax him away beginning several months ago, but -- just like all cats -- the harder we tried the more insistent he became that this was HIS room.

We tried everything a cat lover could think of, but for the whole month it was a caterwauling, crying, meOWWWing and scratching at the door.  As soon as he heard the door handle he would dash down the hall.  He only got in once and then went right under the bed -- a very low one.  We had to use the broom to get him out --.... soft end, gentle pushing.  As soon as I got hold of him he went limp like a 13 pound lump of wet clay and I just couldn't pick him up (my left hand doesn't have much strength.) If you could have seen us.... two old ladies down on their hands and knees, backsides in the air, grappling with this VERY determined cat!  It must be said that he is very gentle so there was no fear of biting or scratching.

We did finally get him out, but what a lot of puffing and panting!  I should have taken a photo of the very miffed and disgruntled look on his face.  It was a constant battle all month long.

The morning of her departure, we opened the door and he dashed in -- up on the bed, on to the dresser and up to the window. Of course we left the door open for him and he went in only once more for the rest of the day, took a quick sniff around the room and left.

Only a few hours later he was back to his old, mellow, sweet, cooperative self.  Really, it was such a change in character and SO stubborn!  I have no idea what that was all about!

This is my contribution to FMTSO.  For truly awesome photos for this MY TOWN meme, please click HERE.
Posted by ChrisJ at 12:01 AM 12 comments: