Saw a Momma duck and five ducklings on the creek right below our house yesterday.

Suddenly there was a screeching and flapping of wings as a hawk zoomed in out of nowhere.  Even as I clapped my hands to shoo him away (poor hawk, I know he has to eat too -- but not while I'm watching, please), two big black crows dive-bombed him.  There was smack on the water and a slapping of wings.  The hawk took off -- not very far -- with the crows after him.  Just then the Pappa drake came squawking down the creek and landed near his family.  But all the excitement was over by the time he got there.  A few moments later the hawk did make another half-hearted attempt while flying back across the creek but the crows were on him like a shot.  I stood and watched for a while and was happy to see that there were still five ducklings, but now swimming close to Mom.

Now I'm wondering, were the crows actually protecting the ducklings or were they just thinking of their own nests high up in the pine tree close-by, taking this chance to get at their enemy while his attention was distracted?

The wild fires came very close to us a couple of weeks ago.  We were next in line to be evacuated and actually did receive the reverse 911 call  but just to tell us that the evacuations were over.  The fire fighters and all the resources available were right on top of it all even though the event was more dangerous than ones we have had in the past.  Nine separate fires all sprang up in various parts of the city, some looking suspiciously like arson.

Since the Cedar fires of a few years ago when so many people lost their homes, the various departments, which included the military, have seriously overcome the red tape which was hampering their efforts to work together and provide necessary equipment to fight fires.  There was much criticism back then, mostly derived from the entangling red tape and bureaucracy.   What a difference this time!  The work of all the departments was magnificent!  I think there were only three homes lost.

Most people unfamiliar with our wild fires do not realize the speed with which these fires move given the right environment.   We have had no winter this year, it has been a delight, but it is going to be a long, dangerous wildfire season.

For those who may not know, 911 is our emergency phone call, like 999 in Britain.  But the reverse 911 is when the authorities call you to let you know of imminent danger such as floods and fire.  A great idea!


Now for some anxiety-ridden news.  Our granddaughter, Haley, not yet 13 years old, has just been diagnosed with stage five Crohn's disease.  Of course everyone thinks their grandchildren are amazingly special and gifted.  We're no exception.  But she really is!

It is barely three weeks since she was first admitted to the hospital.  Then after tests and medication for about ten days, the diagnosis was made.  She is on antibiotics intravenously and can only eat very limited food until the abscess is healed.  It was very large and had pushed through the wall of the small intestine, collapsing her colon.

It's a lot for a young girl to go through never mind the future implications, so we are asking that if you are a praying person, please pray for Haley -- and her mother, who has taken on the immense task of nursing her and administering medications as well as being Mom.

A month or so ago I asked Haley what her favorite flower was as I have been doing drawings for all the 'girls' in our family.  She said it was a deep, dark red rose.  I posted my drawings here on my blog not too long ago.

My sister Kay, sent her some drawing templates of tangles and Haley has created one as her favorite flower. It is now placed in her room along with mine. 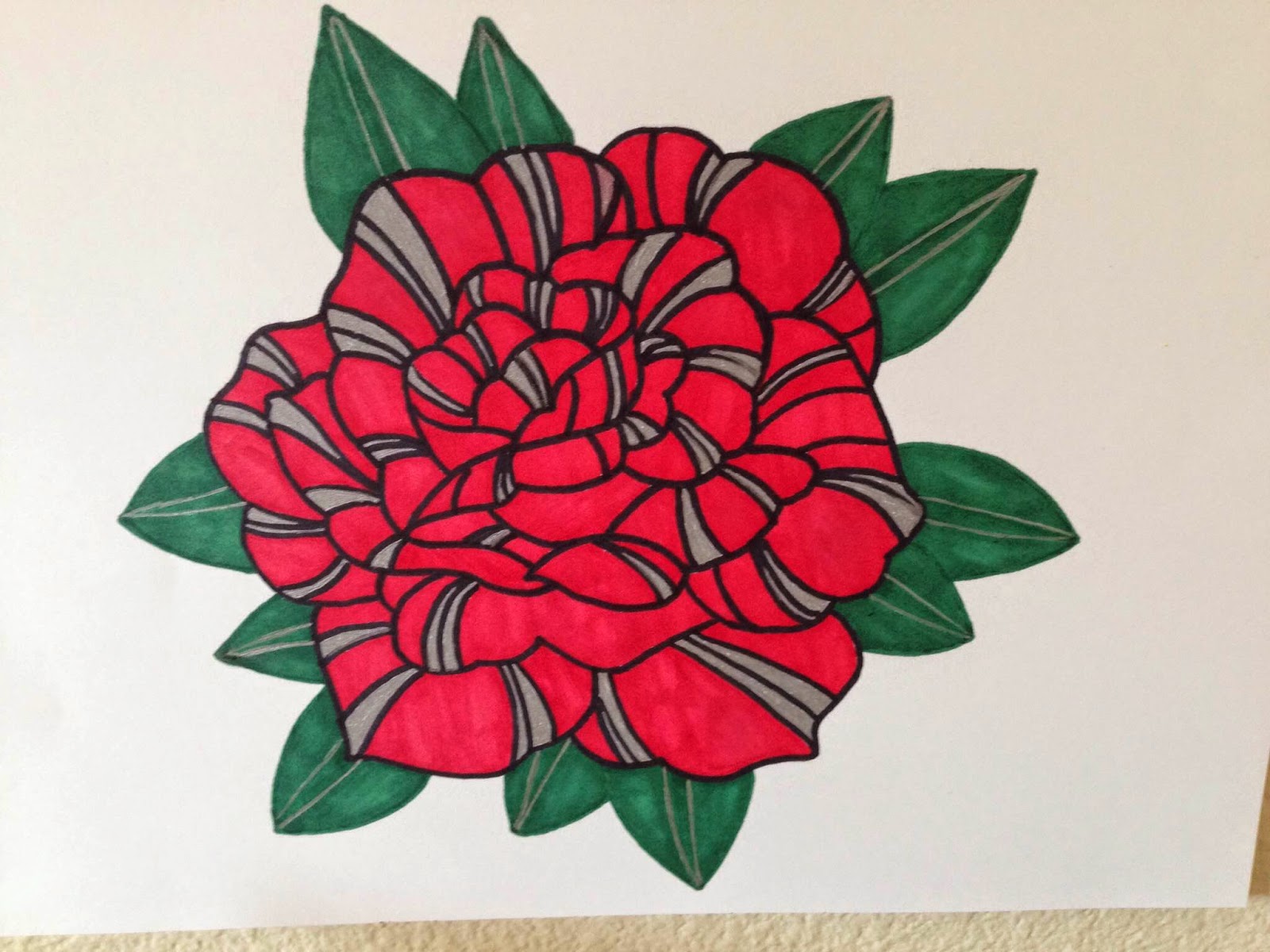 Then just to top it all off, her step-Dad, my son Glyn,
brought her a dozen long stem roses while she was in the hospital. 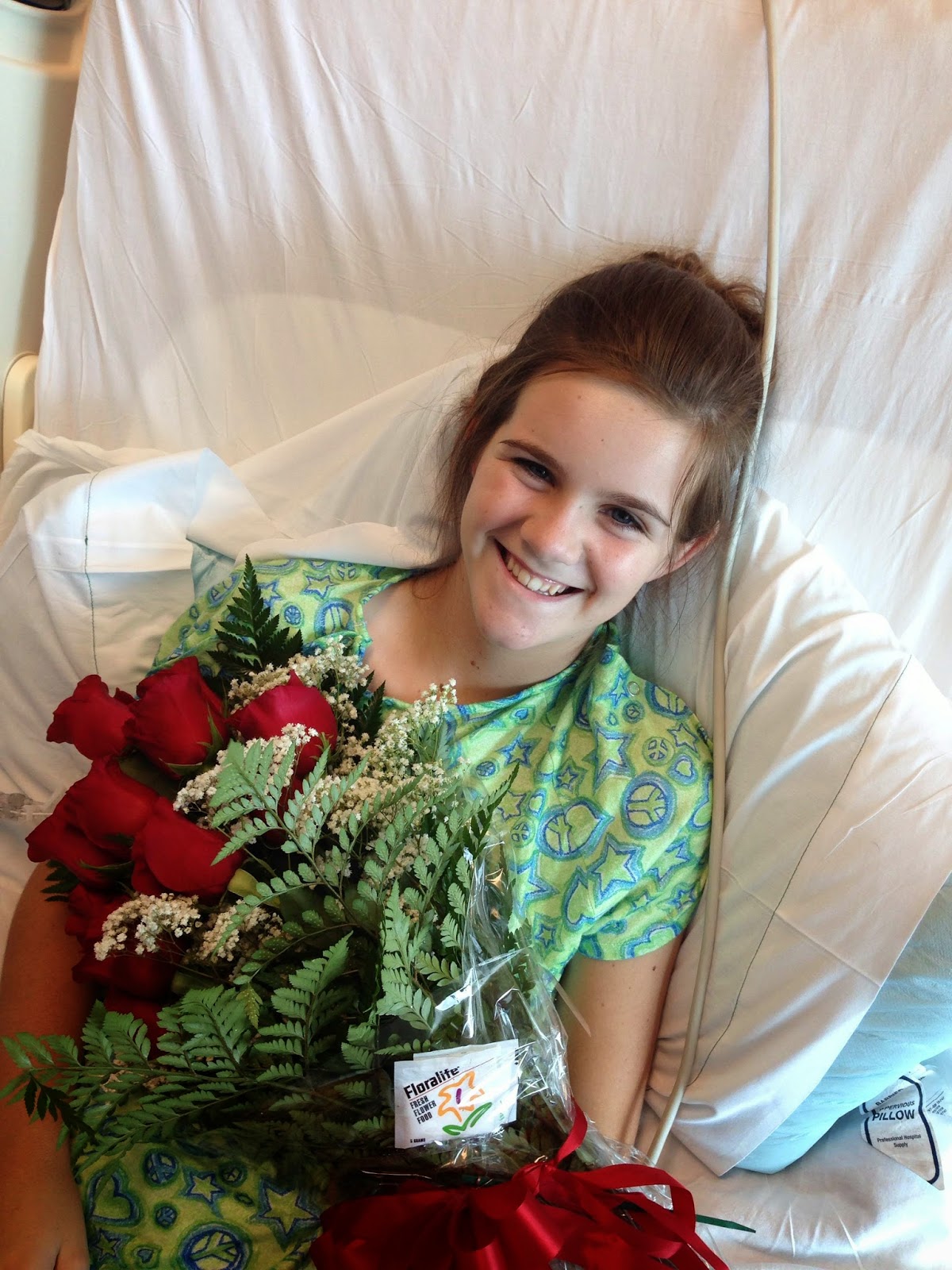 Look at that smile!  She was certainly pleased to receive these!

She is surrounded with prayers and love as well as the unfailing love of her heavenly Father, so we are expecting the Lord to do wonderful things in her life.

Here's a thought for those of us who sometimes wonder why God doesn't just heal those who love Him.  If He did, I wonder how many of us would love Him for all the wrong reasons --  just for what we could get.

I was a bit perverse in my entry for this week's Creative Tuesday.  I wanted to do something unusual and I came up with this idea.  I have to tell you that this topic in no way has anything to do with my political views. It is just a drawing.  I wanted to do Socks but when I found this photo on line I thought it would be a good opportunity to practice drawing faces too, since that is something I have been doing recently. 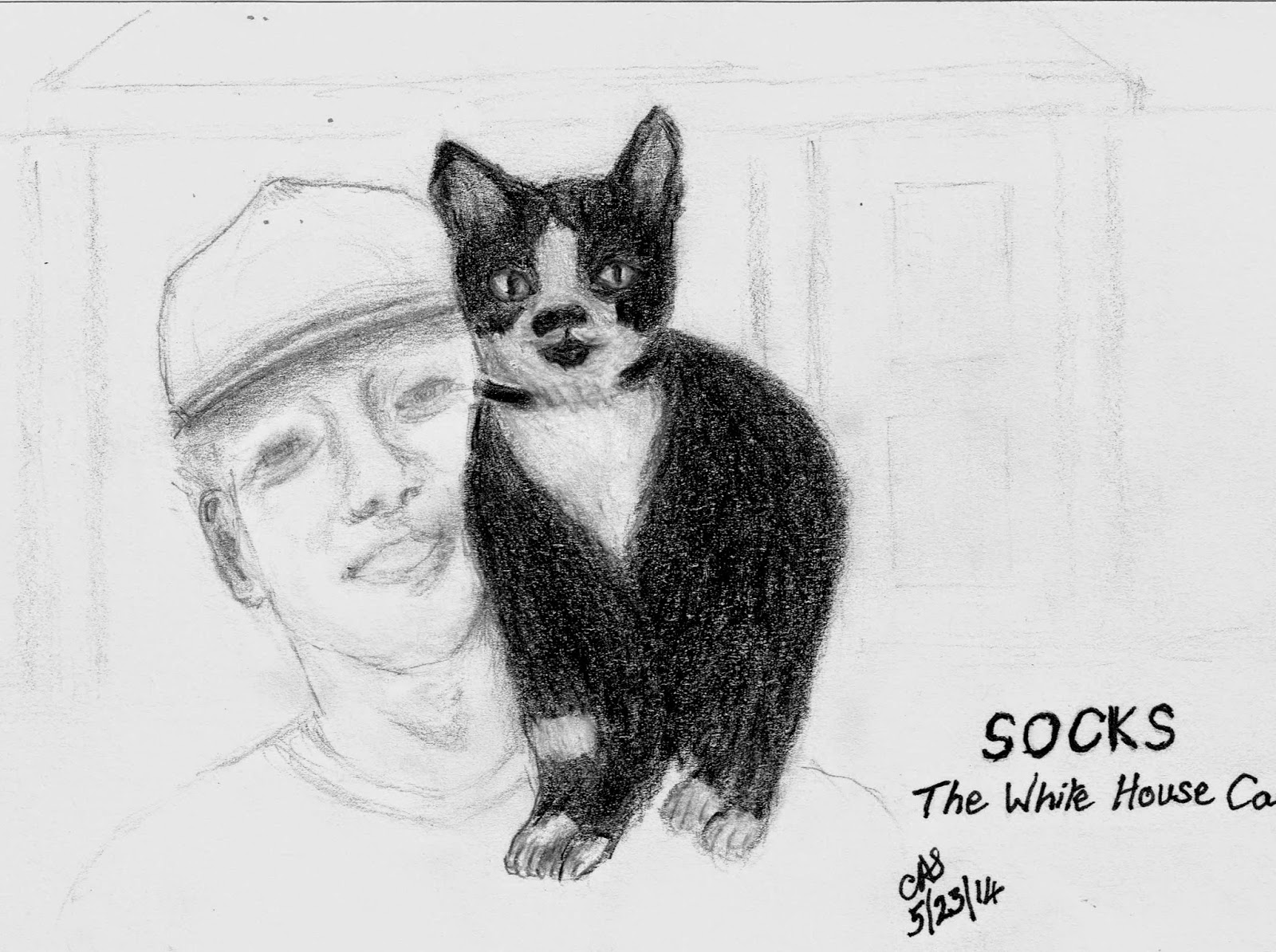 Actually, I think Clinton's face came out better than Socks.

If you would like to see other entries in Creative Tuesday please click HERE
Posted by ChrisJ at 2:01 PM 7 comments: 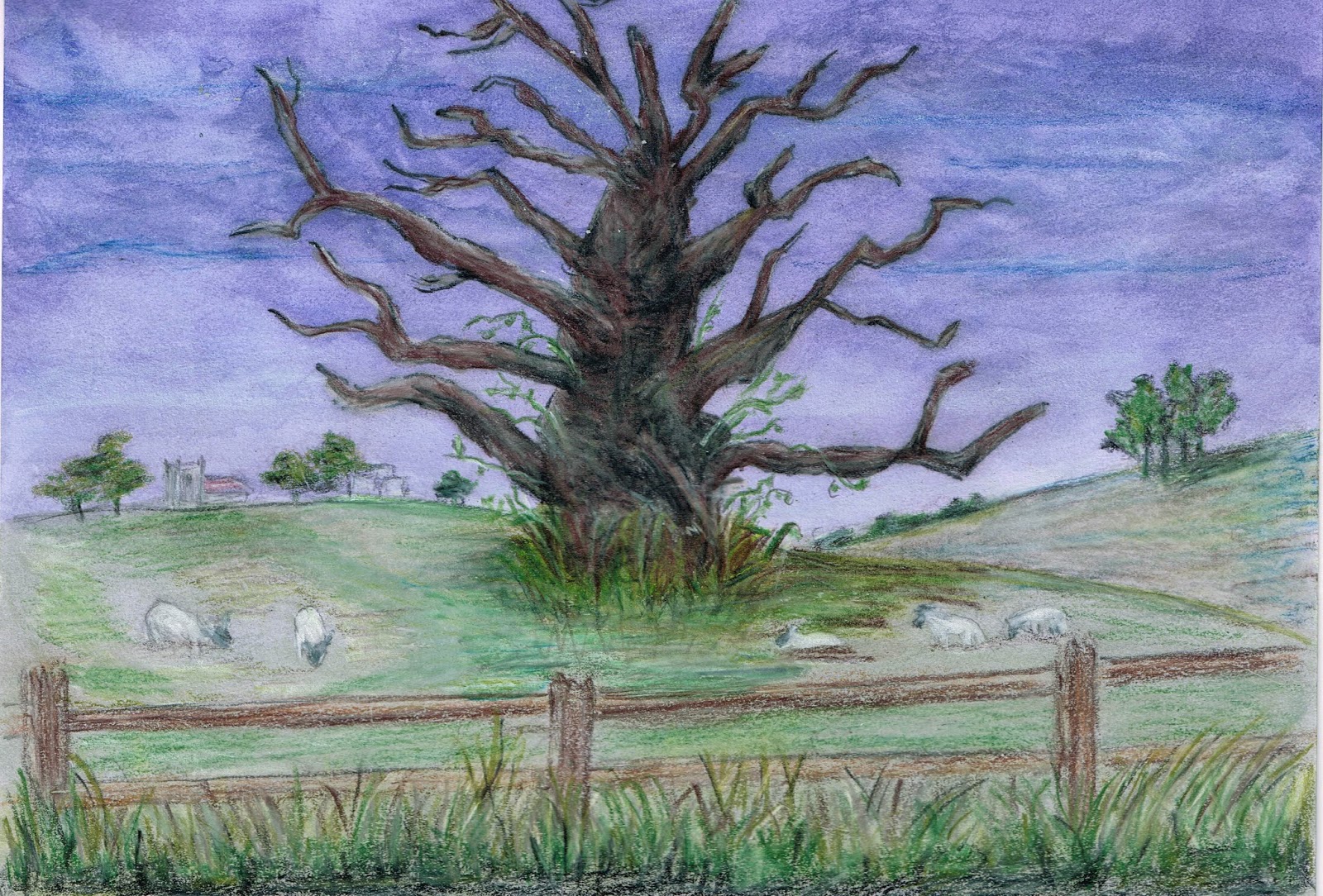 THE OLD OAK TREE AT HOTHORPE HALL Leicestershire UK.
( This was drawn with Prismacolor pencils on a water color background.)

In 2007 we stayed at Hothorpe Hall for our denomination's Triennial Conference.  It is a magnificent venue.  The hall is set in beautiful grounds.  This old Oak tree was located near the driveway that drove up to the Hall.  At dusk it looked quite eerie indeed.  I took a photo of it but that was three computers and probably a thousand photos ago and I couldn't find it.  So I had to do it by memory  I'm quite pleased with it because it does look like I remembered it.

One evening while there, I was sitting outside in the dusk when over in a group of large trees I saw a strange, large creature slowly climbing one of the trees.  It looked like a humped-backed creature with twisted legs. I wasn't scared because I don't believe in monsters.  But I watched it for a while and then I remembered the Hall had quite a few peacocks.  I didn't realize that peacocks roost in trees!

I'm going to take a look now at what some of my other cohorts did for their interpretation of the Oak Tree.  Come on over and visit us -- even better, join our group and see what you can do in the way of interpreting our bi-weekly themes.  You can find us HERE
Posted by ChrisJ at 5:19 PM 17 comments: