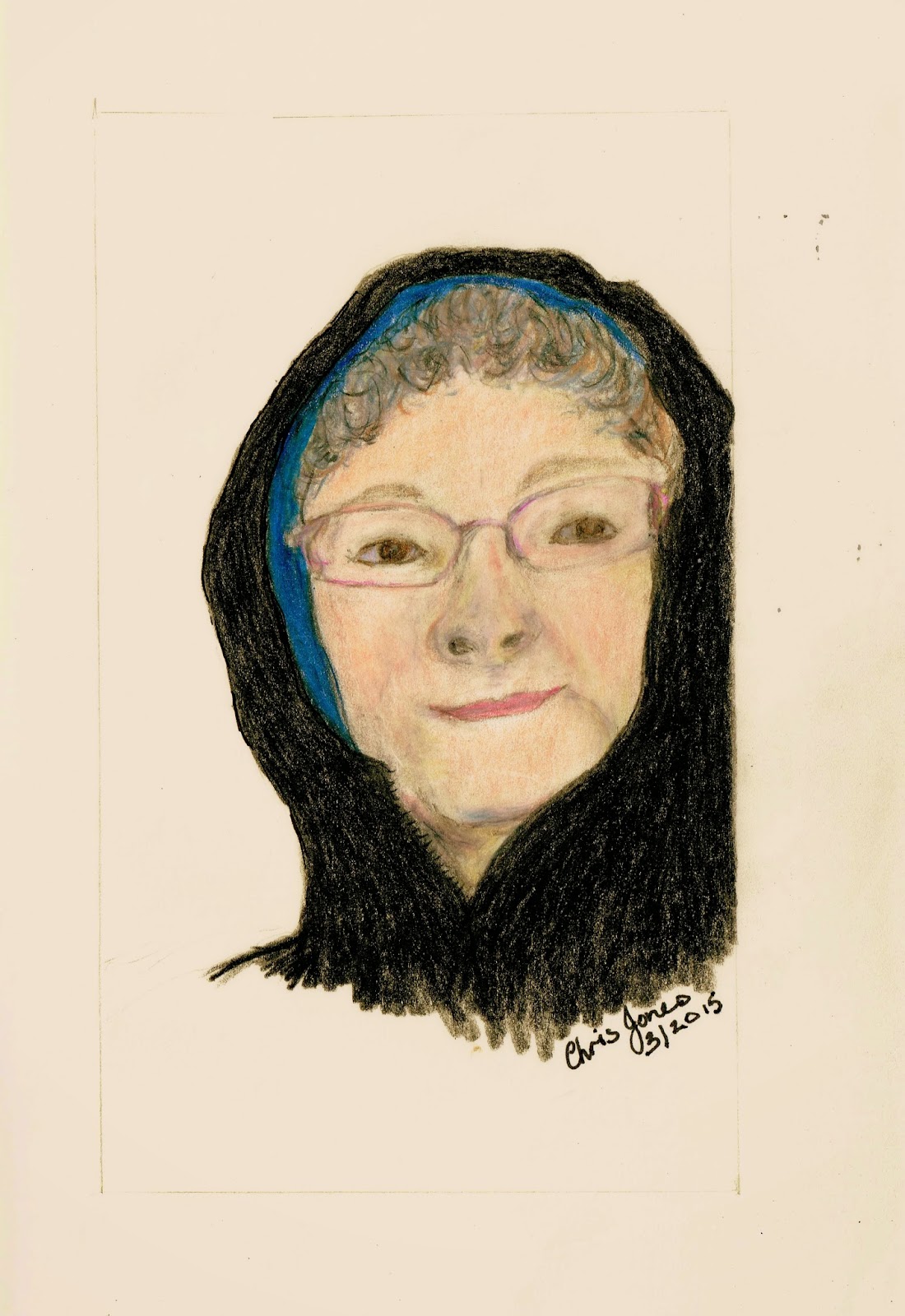 (Sorry Kay, it's not as beautiful as you are.)

My sister, Kay, known by her friends as Kathy,  by family as Kay and her bloggers as Kaybee, is almost eight years younger than I am.  I drew this portrait of her from a photograph taken recently.  I really liked the photo, which I think makes her look like someone out of a Jane Austin novel.

We have had an unusual relationship in as much we really didn't know one another until 2007 when I was in my 70's and she in her 60's.

By the time we were of an age  as children that we might have interacted very much, Kay was three and I was almost 12. I started attending high school in the nearby town of Bridlington.  Each day I left home at 8:00 in the morning and didn't get home again until about 5:30 p.m.  This was the situation until I graduated in 1956.  Then I went away to college, after which I worked in the cities of Nottingham and Liverpool.  Soon after that I was married and my husband and I moved to Canada and subsequently the USA.  So we really didn't have much time to get to know one another.

By 2007 Kay had moved to Canada and we lived in Southern California.  It happened that year that our church denomination planned to hold an international conference in England.  My husband and I organized a tour to England for the members of our church to attend the conference followed by a bus tour for a week afterwards.  Kay  wrote and asked if she could join us for the bus tour.  So now after 50 years, my sister and I had the chance to spend time together and get to know one another for a whole week.

We were so surprised to find that despite being apart for so long we had many, many things in
common.  It has been a wonderful experience to now have a sister, who though we are still far apart in miles, we have since been able to spend  much time together, by visits every year, by telephone and of course through  email.

Though  we came from a non-practicing Christian home, an important part of our close relationship has been that we both developed a strong personal Christian faith many years ago.

Now as I look at this post, it seems to me that we need to have a photograph of us together.  So next time she comes down to visit that's something we must do.

This is my contribution to ABC Wednesday, an exceptional meme started by Mrs. Nesbitt and continued by Roger Owen Green, now in its 16th round.  Hop on over to this blog and see all the other wonderful entries.  I know you will enjoy all the educational, entertaining and enjoyable entries. (Too bad this wasn't the page for E!) by clicking HERE.
Posted by ChrisJ at 3:25 PM

I LOVE this post with your story of connecting with your sister after many years of being apart due to the difference in your ages. This is a beautiful story.

I agree a lovely story.

Glad you found your sister finally. They're really special. My sister and I are very close. Looking forward to a picture of both of you together.

I recognised the picture straight away, you have captured her well. I have several pictures of Kaybee and myself together as children, but few of you Chris. We also met again after many years but in my case thanks to the Internet.

That is such an inspiring story of coming together.

That is so wonderful ! Finally being able to know your younger sister ! I am an only child and no siblings hidden (as far as I know, lol )

Thanks for the lovely story you wanted to share with us. I have also a sister with whom I go on holidays and share our ups and downs. That's very precious.
Wil, ABCW

I find your drawing to be absolutely beautiful, Chris. So much expression in her eyes! Love the story of the deepening of your relationship with Kay. My sister is super special to me as well, so that aspect of your post really resonates with me.

This is a lovely post, Chris, and I am honoured to be your "K" for this week's ABC Wednesday! It has been quite miraculous how the Lord brought us together...and that we actually love each other!! One of the highlights of my life was that week AFTER the bus tour, where we explored and enjoyed Flamborough together..another love of our lives. I hadn't been back to visit since we left there over 50 years ago (now close to 60 years ago), and it was lovely to enjoy it together! It is also wonderful to have our cousin 'snafu' back in our lives, as he says above, thanks to the internet! We have had some lovely visits back and forth, too.

Enjoyable story and your sketch.

I forgot to say that that picture of Kaybee, also looks a lot like your mother the last time I saw her.

This is truly a touching story and portrait of your sister. May the Lord continue to enrich the family ties between you and your sister. Thanks for your visit and happy ABC Wednesday!

Hi Chris, I'm pleased to see Roger has fixed your Linky out.xx
I love the story of you and your lovely sister, I'm so glad you have such a close bond.
Sadly my sister has Alzheimers and doesn't recognise me anymore.
She is 8 years older than me and there is so much I would like to ask her but I can't, she's so very vacant.
best wishes,
Di. ABCW team.

A lovely story of you and your sister! Lovely portrait as well.

wonderful to meet up with yr sis Kay. I have 5 sisters, but I live thousands of miles away. Very fantastic when we meet.

Amazing not knowing your sister for so long.
Wishing you both many happy moments in life!