I have just finished talking on the phone to my sister in Canada for about an hour. We were comparing notes on the book we both received for Christmas: "The Right Side of the Dyke" by Margaret Smith and Rita Sellars. Such a great book! All about our village of Flamborough in the UK. In the book you can really hear the fisherman talking in that great Flamborian accent. Now that the holidays are over I can sit down and digest it more slowly. I absolutely gobbled it up in two evenings when I first got it. 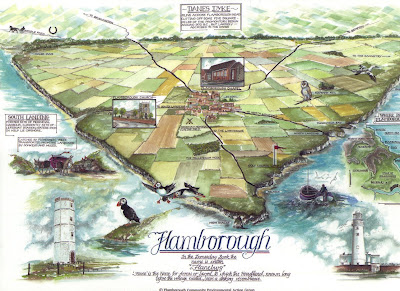 First we lived in the village, (center), then we lived at Silex Bay, right where the black line for the road ends, just above the 'g'. Later we moved to Bridlington about 6 miles away. Just follow the road that goes off the map. The 'Dyke' is the green line that cuts across the headland. It is known as Danes' Dyke and is a fairly deep trench supposedly cut by the Danes (800 A.D.) to make Flamborough an island but actually it goes much further back in time than that.


Thinking about Flamborough, I decided to get out a CD I've had for quite some time but haven't listened to for ages --"Your Hit Parade 1951".
OOOF! That brought back some memories. Two Mario Lanza favorites "Be My Love" and "The Loveliest Night of the Year" almost brought tears to my eyes, and as my husband will tell you I am far from being sentimental! I can still see "His Master's Voice" red labels on the records which I played over and over again in the front room at 15 Woodcock Road. Tonight I had the house to myself so I turned up the sound. There was just me and the cat. Though I have to admit, the cat took off to sleep under the table in the kitchen.


However, back to the music. The last piece on that CD was "Charmaine" by Mantovani and his orchestra and that brought back another memory!

Eventually we moved from Flamborough to Bridlington for a couple of years. While there I joined the Youth Group at Christ Church. There were about fifteen of us as I remember. It was a great group of young people and often we would all go as a group to The Rep. This was a weekly performance done by the seaside Repertory Company who put on a different play each week at the Spa. I can't tell you now what the shows were (I think one was "Charlie's Aunt") but I do clearly remember that Mantovani's "Charmaine " was the main theme music all the way through one of the performances. I've loved it ever since.
I listened and......OOOF! That feeling again.

What is that strange feeling you get just above the heart and somewhere in the back of the throat? It's not tears and yet it's not quite happiness. It has something to do with nostalgia and all those wonderful feelings we experienced when we were young and life was full of surprises and excitement -- things that I am so thankful to have had, yet saddened because they are from so long ago.
I just had another birthday this past Christmas. That makes me 71. Yet those memories and feelings are as clear to me now as they were so long ago. I am so truly thankful that I have these wonderfully happy memories to look back upon.

Thank you Flamborough and Bridlington and thank you Lord for giving me a great life of happiness!

After I read your post, I went to hear Mario on I-tunes to see what kind of emotions I would have (remember, I was much younger).

Funny, when I played "Drink, Drink Drink..." (...lo-ovingly, lo-ongingly!)and "Be My love," I remember them so well, and yet I probably haven't heard them in over 60 years. I have a feeling they were played so often they were soundly imprinted in my memory! Must say I didn't have quite the endearing feelings that you did -- but thanks for bringing back all the memories. We were blessed to live in Flamborough and Brid!

So glad you weren't affected by the earthquake!

I found this to be one of your most interesting posts. I really enjoyed reading it too about your hometown and the good times you had there. Nice.

Hi Chris.
Happy New Year!
Strangely enough we were on that very road today. We decided to blow away the cobwebs and go over to Bridlington on the motorbike with some friends. We went via Scarborough and came home via Malton. There is a new road now, just before the turning for Flamborough...now there is a big roundabout. I did think of you, I said hello from Chris as we passed.