We have battled squirrels and doves eating all the birds' seed all spring and summer.  We put a bell shape over the trays with only enough space to let the smaller birds in.  We put metal cones on the stand that holds the feeding trays. That foils the squirrels.  But now come the rats!  They are wood rats or tree rats, not the usual kind of sewer rat.  They can climb rapidly up the palm trees and skinny up the thin metal poles.  Their long tails wrap around everything and help them balance. 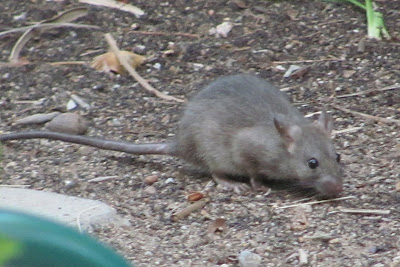 I don't mind rats and mice as much as spiders and cockroaches. 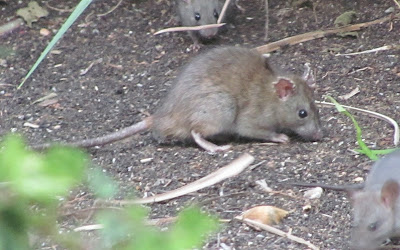 As far as I can tell from Google they are wood rats or tree rats. The largest ones are 8-10 inches long, not counting their tails -- which are longer than their bodies. They live in the palm trees and among the thatch from the fortnight lilies.  At night they come down the tree trunks and if you scare them they will go up the trunks into the palm leaves.  They were getting into the seed tray underneath the bell cap and just twined themselves around the pole and the cover to get at the seed.  So we moved the tray to a place a little further away from the palm trees but close to some bushes whose branches barely carry the weight of the birds.  That worked, because I haven't seen any more droppings in the tray. 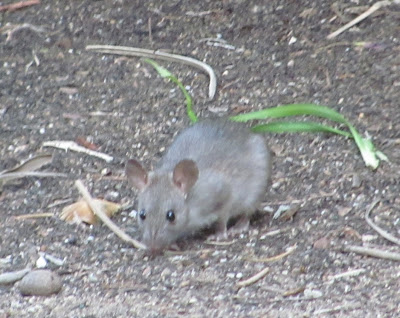 However they now come out in the middle of the day and mooch around the ground around the feeding poles.  The squirrels do the same (These are ground squirrels and live in holes in the ground and under the deck), but they have bushy tails and are grey in color. 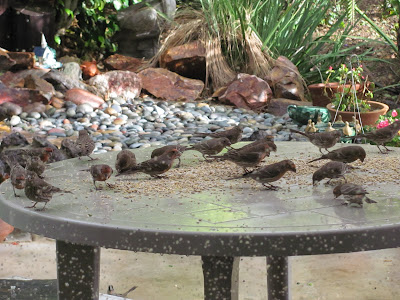 During the winter and our wet spring I put a lot of the seed on the plastic picnic table because it didn't get pools of water for the seed to become sodden and the table is on the patio and under the patio cover.  However, we stopped doing that once the rain finally gave up. 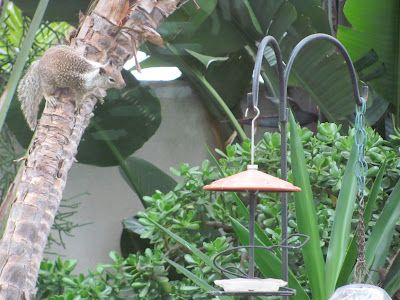 Here you can see a squirrel debating whether to jump on to the tiny feeder.  He decided against it. 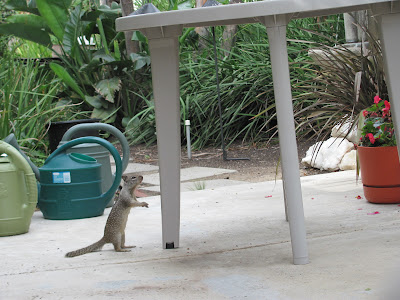 The baby squirrels in late spring tried scrambling up the legs of the table.  We even had to move it away from any bushes because the squirrels would jump from the nearest bush.  Climbing up the table legs didn't work either -- for a couple of weeks. They would fall down with a bump.
But they didn't give up. 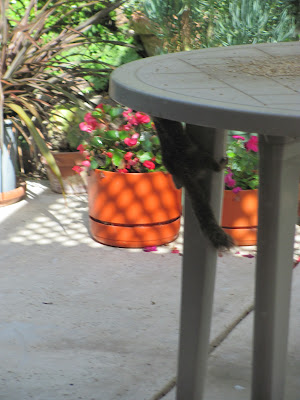 A few weeks passed, the squirrels got bigger and stronger, until one day... 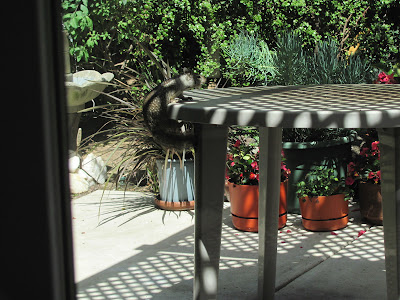 He made it!
( Sorry the light is not so good on this, but I had to take it when he did it).
So back to the feeding tray and the bell cover and cone for the summer.
Someone told me that PEPPER would keep the rats away, so today I bought a small jar of pepper and sprinkled it around where the rats come out of the bushes.  Neither the rats nor the squirrels liked it but they just scratched it away. I had put out a whole jarful about four feet long and a couple of inches wide.  Obviously you would have to lay the pepper down inches thick for it to work.
Then I looked at the receipt for my groceries and saw to my horror
I had paid $7.00 for the jar of pepper I had just scattered on the ground.
In the mean time the rats and squirrels, doves and rabbits have the run of my back yard.
Just to prove it, the rabbit came right up to the patio door and peered in
at us while we were eating dinner tonight.
Posted by ChrisJ at 8:33 PM

As we live in a farming community we often have rats passing through - If it gets too bigger problem Jon will pop them - more humane than poison!

OK. I can understand why you wouldn't want rats on an arable farm because they'll eat your crop. But I don't get why people differentiate between rats and other creatures when it comes to putting out food for the wildlife.

I used to keep fancy rats (Rattus norvegicus) and they are wonderful, clean, sweet creatures when they don't have to fend for themselves in the wild.

I guess it's every person to their own taste.... Personally I can cope with rats in the garden but if they try to get indoors (I live in the country - they try it most years as the weather turns cold) I draw the line.

Now that's one thing I haven't seen in my back yard.


Years ago, my daughter had two rats as pets...(from the pet store) Cleopatra and Ashley Ben....

I'll stick to cats and dogs.

AJ: I really don't mind them in the back yard, but I keep hearing horror stories of what they do if they get into your roof. Our houses in S. California are not nearly so tight (holes blocked etc. against cold weather) as homes in the more northerly climes. And it is true that they carry bubonic plague in parts of CA. In addition my husband is a city boy from Liverpool so rats have bad connotations for him.

My complaint is that they eat all the bird's seed along with the ground squirrels, so I don't want to be buying bird seed at $35 a bag just to feed the rats!

But I'll tolerate them if they don't get in the house.

Ah well. If you're paying $35 a bag for the feed that counts as a "crop" so you wouldn't want them eating it. I agree.

I lived in Liverpool for a while. Strangely I've had worse rat problems in the country than I ever did there.

They got into my kitchen a couple of years back and I had no qualms about calling the exterminator.

I laughed out loud at your realisation of the price of the pepper. I think you're right - you'd have to spread it inches thick, but I doubt it would work even then.
Periodically we have rats in the garden, both because we feed the birds and we have a pond. Currently, there are three (at least) baby rats exploring their territory (our garden) so we know there are bigger rats around. We would soon be overrun so Barry shoots them. I always regret it for I like rodents of all sorts, but I can't keep them free of disease so they must be despatched.

The Weaver of Grass said...

Must say that those rats are rather pretty. Here on the farm rats get very short shrift I am afraid.

They do look cleaner than sewer rats. But they are rats nevertheless and rats have a bad rep. lol

These rats look quite cute and rats do make good pets but wild rats of any species carry diseases that humans can catch. Rats in City centres are not obvious because they can get around out of sight, but if you travel on the London Underground you will see them scuttling along besides the tracks in every station. They do say you are never more than 100 feet away from a sewer rat in any large conurbation.

What an entertaining story! I went to comment on Eyam and got sidetracked by this post! LOL! My, it seems like you cannot win that bird food battle there. At the home I grew up on on Molokai, we have a Macadamia nut tree next to our house with an electric wire that runs right by it to the crawl space under the roof. This is how I learned about tree rats (but have never seen any since they are nocturnal where our home is). Anyway, they bring the macadamia nuts in to the attic in the space that was above my parent's room. Mother could hear them at night sometimes-well what she heard was the mac nuts rolling around as the tree rats used the attic as a storage place.

Rats may be wonderful for some but not for me.
We had a bird feeder at our last home and it did encourage the mice and rats. Unfortunately we had to take it down to keep them from invading the house.