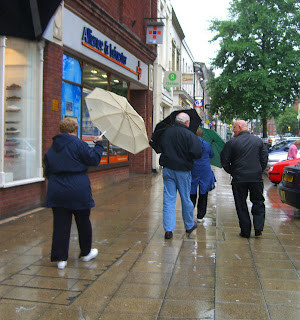 They tell us we will have had 7" of rain by the time this storm is over.  Considering we only get 10" a year, that is a LOT of rain for us.  It has been accompanied by wild wind gusts (25-60 mph) and fog! Up to 12 feet of snow in the Sierras!  The whole of San Diego county is on flash flood alerts. Definitely weird for us.
I know most of the US is suffering from much snow, not to mention the UK and Europe.  So maybe I'll take the rain over the snow.
W is also for Wound -- the cat bite kind. No photos of this, but I'm sure you won't mind that.
We had an 11 month old, sleek, handsome, black cat called Midnight, at the shelter who so badly wanted to be petted, but then after a moment or two couldn't handle it.  I had been warned of his sudden changes in behavior and had actually dealt with it a time or two during my visits. So last week I decided that I could still tame this Wild cat.  I took a small towel into the room with me, to throw over him when he got too excited.  He came over to me and jumped up on my knee while I petted him very gently and talked softly to him.  Before long he was purring up a storm.  Then suddenly he jumped down, ran to get a toy, changed his mind  and raced back at me and grabbed my arm.  Too late with the towel!  He broke the skin in two places, but it wasn't too bad.*
However one of the cat carers noticed the WOUND a little later and insisted I have it looked at  etc.  I ended up filling out 6 sheets of paper work. Then I continued with my rounds.  But a little while later I saw a worker go into Midnight's room with a cat carrier, and sure enough he had to be taken in to be quarantined for rabies.  Apparently I was the second bite of the day.  He had already been in the shelter for 16 days  so the rabies thing is not very likely, but this is the County Animal Shelter and "Rules is Rules".  Now I'm greeted by my fellow workers with, "Have you got rabies, yet?"
*Footnote:  I know I have taken this incident very lightly, but that's just for ABC Wednesday.  I do know how dangerous cat bites can be, not to mention Rabies and Cat Scratch Fever. Anyway the scratches and bite marks have gone and I think I am still in my right mind.  To make up for this unfortunate incident, we have at the shelter four most adorable older kittens that would make absolutely wonderful pets, and the nicest one of them all is a Siamese mix.  I have spent some good times cuddling with them.
Posted by ChrisJ at 12:25 AM

Well plenty of material for the next time R comes around. R is for Rules and Remedies for Rabies ...
Rabis is also known as Hydraphobia - a fear of water. Does the rain scare you? Do you not want to go out in the wet? Could be a sign of rabies, or more likely just common sense. Anyway,
My step son's cat did that to me, all purring and friendly on my lap one second and mad assasin the next.

I beleive that the sudden bite and scratch mode is common to cats who haven't had a good early experience with humans--they just don't have good social skills. I once picked up a feral kitten [should have known better] and had its tiny teeth sunk almost to the bone of my finger, a very startling and unpleasant "wound."

We've had crazy weather up here in No. Cal. too. Lots of rain and wind. The clouds are so dark that I seem to have my lights on all day.
Glad you are ok from the bite.
Wishing you a very Merry Christmas and a blessed new Year.

Glad things weren't worse with the cat and that you're OK! And speaking of Ws -- there has been lots of weird, winter weather lately -- everywhere! Ours has been gray, rainy, windy, chill, but certainly not as bad as other places here in the states as well as Europe! But, of course, I Whine anyway -- well it's the W Day! What better day to do it? Wishing you a very Merry (dry) Christmas!!

So sorry about the bite - my dog bit me twice before I ended up having him put down.
Be thankful you only have rain and not all that nasty white stuff! We had some, but it's all gone now and I'm praying for a grey Christmas. lol

1. My sister lives in San Diego County. I just called her about 30 minutes ago to make sure she's OK. the weather's lousy in Los Angeles too, I read.
2. Having had rabies shots, I definitely take rabies quite seriously!
ROG, ABC Wednesday team

We have the same weather in Oz. After ten years of drought this year is wet, wet, wet! Good weather for drowning cats:-)

RAIN IS GOOD AS LONG AS THERE ARE NO FLOODS.

Weather has been wild around the world. Amazing. Nice rain photo, though - it has nice movement.

Hawaii had those rains too and then they came your way!
Poor Midnight. How unsettled life must be for it! Glad to hear your wounds have ended.

Glad to hear you are ok!
Weird weather all over the globe - looks like this is the new normal!
have a wonderful Christmas!

Your first picture looks like Belgium in summer ! It rains !
My little Rosie is in perfect health and I got her as a baby but she too after a while suddenly bites ! I don't know why. Since in a reflex I had slapped her, she doesn't do it anymore with me but still with Mr.G. I have heard that this is typical for tuxi cats !

Yes, that wet wild weather is here too. Rain, rain, rain. Today me and the grandsons got caught in it and came home drenched...but did we have fun...boys 9 and 11 love getting wet.