PHYSIOGNOMY
(fiz-i-og-nomy)
The features of a person's face.
On and off over the past year or so I have been telling myself I need to  start practicing drawing faces.  Just drawing faces is difficult enough but to actually make the drawing have any kind of a likeness to the subject is very, very difficult for me, but I know I will improve if I practice.

I have been working on the PHYSIOGNOMIES of these two faces for over a week.

The first one, my first attempt in well over a year, was completely made up out of my head: 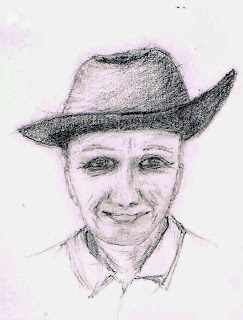 Well, it was a start, but I could list all the things wrong with it.  I seem to be able to draw eyes, but not as a pair or suitably placed in a face -- yet! 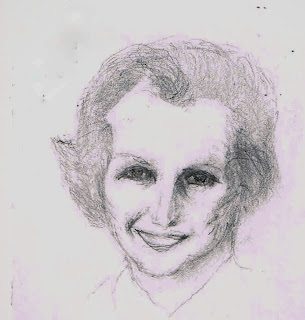 This has quite a pleasing effect, until you know that it is supposed to be from a photo of Margaret Thatcher.  There is a very slight resemblance in it somewhere, but again the eyes are too overpowering. I have to admit that I did a little editing with the contrast and highlights through Picasa on both pictures.

I know I am very critical of my work, but I have to know where to improve and how.

I bought some pencils tonight after doing these -- an HB, a 2B, a 2H and an ebony.  I can see that if I am to do more faces I will need different pencils for the PHYSIOGNOMIES of the faces.  I think too that I must practice different physical features without the rest of the face.  It is amazing to me how just a very little change in the direction or strength of a line as well as exactly where the shadows come can totally change the look of a face.

This is going to be quite a project, and one I will not be able to do for long lengths of time because of the close work and concentration, but something I can put down and pick up again later.

Now here's a true story about the effect the word 'physiognomy' had one year in my life as a teacher.

This word lost me the good will of one of my students about 25 years ago.  I was teaching 11th Grade English.  Part of the course meant the students had to read "The Scarlet Letter" by Nathaniel Hawthorne. We were a private Christian School and this student discovered that the 11th grade in the public school only had to watch the movie (a really poor production anyway) and not read the book.  Since our students were later expected to take the SAT exams the book was required reading and introduced the students to a whole host of difficult vocabulary.

I won't bore you with the way I attempted to make the book more palatable to them as well as useful, but when we bumped up against the word 'physiognomy', this particular student had a melt-down!  Sad, because she was a really nice girl, but was simply strong-willed.  All year long she never let me forget how much she resented having to read the book.  Ours was a small school and a small class so the strain on our relationship suffered and now all I remember when I come across "The Scarlet Letter" or the word physiognomy is the student's tantrum -- 25 years later.

This is my contribution to ABC Wednesday which is in its  13th round of the alphabet and at the letter P.  Our many thanks to Mrs. Nesbitt , the founder, and Roger Owen Green the next in line and to a whole host of others who help to keep this highly successful meme functioning.  To see the contributions of other participants, please click HERE
Posted by ChrisJ at 11:39 AM

Good for you Chris. Your Persistence will pay off.
I could never master faces either.
Love the word for the day too.

as the kids would say, you got skillz!
ROG, ABCW

Great use of the letter P.

I recognized Mrs. T immediately. Only she doesn't look that nice in reality.You made her softer and kinder!
Have a great week!
Wil, ABCW Team

Good work on the pencil drawings, I too recognized her immediately. What was the girls objection to the book and word? Isn't it something how memories will flood back at the mention of a word.
Ann

Hi Ann: the student's major objection to reading the book was that it was just too hard with far too many words she didn't understand and the style was just way too old fashioned. The word 'physiognamy' was just the straw that broke the camel's back, so to speak.

Reader Will: In actual fact the photo I was copying from was from her younger years, so perhaps that's why she looked softer and kinder. The responsibility of holding public office really does change the looks of a person, I think, as well as the fact that they do get older.

I'm sure it won't be long before you're quite pleased with your artwork. You have a great start!

Faces must be one of the most difficult things to draw, but the most rewarding. I'd echo Reader Wil comments about Mrs T. When you mentioned the eyes the first thing that popped into my head was Francois Mitterrand's comment that she "had the eyes of Caligula and the mouth of Marilyn Munroe". Good luck with the new pencils.

Sounds like a great project and I think you are doing a great job with it. Carver, ABC Wed. Team

Your drawings are not bad at all ! I know it's difficult to draw a face, that's why I prefer animal faces, lol ! Anyway I am not "physiognomy" at all, I never recognize a face unless it's too beautiful or too ugly, lol !

Excellent use of P, you are very talented and are too hard on yourself, your sketches are good.

Both very good Pictures, or Portraits. The first one reminds me of an Australian friend of one of my other cousins. As for Mrs T, I agree with Wil, you have softened her.