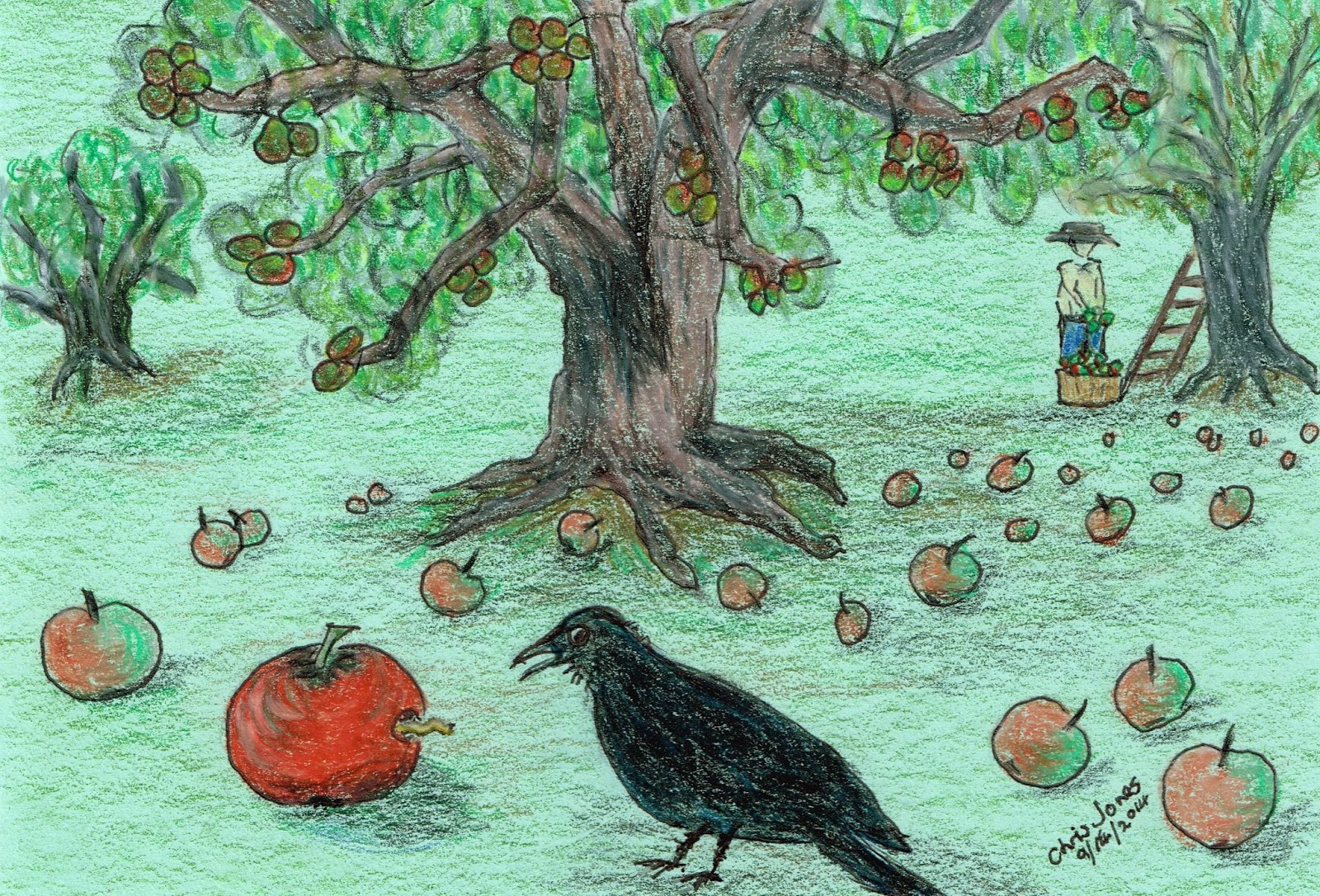 I thought of the theme 'An Apple for the Teacher' but decided it would have to have too much emphasis on the teacher but an apple with a worm in it needed something more in the scene. I debated which bird I would put in the picture and decided that rather than have a cutesy type of bird a black crow would be more in keeping with the idea of a bad apple.  I also thought the apple picker in the background would give the picture more reality rather than a cartoonish style.

Drawn with black pen and and Prisma Colors on a pale green card, 4 x 6 inches.

This is my entry for Creative Tuesday, September 23rd. Please click HERE to see more interpretations of our theme.

Nice gnarled old apple tree. Pity the ripest looking apple is the one with the worm in it. Takes me back to my scrumping days.

This is a lovely fall scene, well thought out! The red apple is perfectly placed as the focal point!

you seen to have taken a lot of thoughts into this, which is good, as I think sometimes just drawing isn't enough.

have a great day.

The Bad Apple. I like that and the worm proves it. Guess that's what started the saying about people being a "bad apple"

Your art work just keeps progressing. Love what you do. The ladder is a nice touch too.

A well thought out and drawn picture Chris. Such a great idea with the worm and bird as well. I love the addition of the green on the other apples. The whole picture tells a lovely story.

Chris, this is awesome. I love the picture and how you decided to bring the various elements together, especially the addition of a crow! Crows add o much mystery to any piece. I love the background of trees and picking. Both man and beast pick away! Thank you so much for taking the time to do this and explain the process to it. Love it.

Lovely story there, Chris. And that sort of looks like the Man Of The House in the background in his gardening hat!

I really do love your artwork and creativity. This is exceptionally full of vibrant life. Beautiful!

I too love the beautiful twists and turns of the tree, and the apples pops out beautifully as the main part, then leading your eye around the rest of this fabulous piece. Great job!

Chris, your apple rendition is great! LOVE the worm squirming it's way out of the apple! :)