I've been stalking this fellow for about a week. He is either a rufous humming bird or an Allens. Both varieties are not too widespread across the States. From what I've been able to find out, some rufous spend summer down here whereas Allens humming birds can be found only along the California Coast. They move very fast and are very difficult to distinguish from one another -- especially the juveniles and females of each species which can scarcely be differentiated. However the male rufous has more brown on its back than green, so I'm going with the rufous for now. But I'll be keeping an eye on him in the weeks ahead, for any changes. 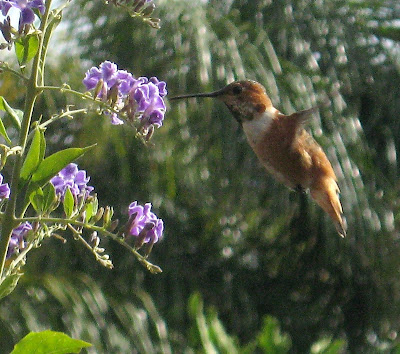 This young fellow is definitely a juvenile, (either house sparrow or house finch), because you can see his fluffy baby feathers. There are many juveniles around the feeders now, learning to fend for themselves. But sometimes they gorge themselves on so much seed that they don't have the strength to fly away. So they find a nearby branch or fence post, and take a nap. When they have rested -- and digested, away they fly. This one was napping on the fence outside the den window. He was there for about 15 minutes. I opened the window and stepped up close to him and he didn't even move. I was only about 3 or 4 feet away from him when I took this photo.
Such a cutie! 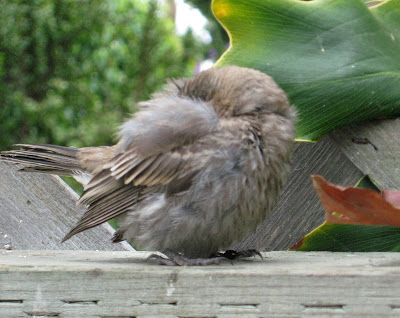 This is a Gulf Fritilliary. He is about 3 inches across. We had one last year and he was a little larger. He is the only red orange butterfly I have seen this year. But look under his wings... 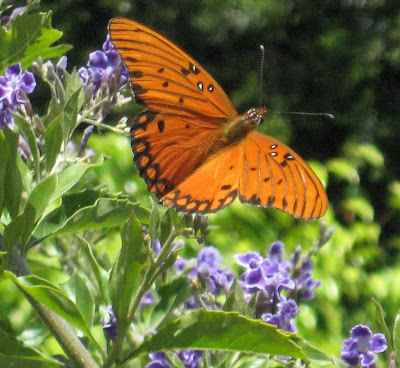 ...those white patches are actually metallic silver which just glitter in the sun. So this makes him a very handsome butterfly indeed. 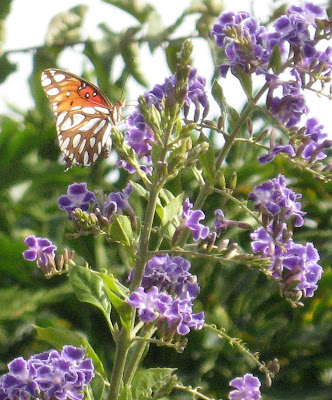 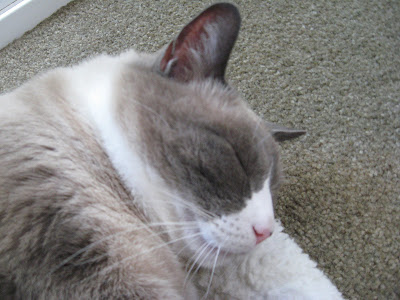 And Bailey was oblivious to it all !!!

Bailey probably said, there she goes with that camera again, I am taking a nap.

What nice markings on the hummingbird! Our hummingbirds are not that pretty.

Oh that Bailey, he is the nicest, prettiest kitty!

Bailey looks like he had a rough day. LOL The butterfly is beautiful. Happy week-end.

Very nice photos, Chris !
I agree with you, the baby bird is very cute.
Bailey has a good life.

You do have some birds that we don't have - I envy you the first one. But I think Bailey should have been more awake with so many "goodies" flying around :-)

Oh to have a hummingbird in my small postage stamp of a garden, you are very lucky to have all this around you.

what a perfect shot of the hummingbird - amazing

We have a female Ruby Throated hummingbird that visits the garden but doesn't stay still long enough to get a photo.

Your nature pictures today, are stunning. Love the hummingbird..never seen one like that, and the butterflies are lovely.

We are up in the Haliburton Highlands and there are lots of hummingbirds -- but we can't get close enough to see what kind they are.

Your photos are beautiful, as usual.

As for Bailey, he missed all the excitement!