Yeah!  It's kitten season!  And boy were we busy yesterday.  We have about seven kittens altogether.  Three black, two tabby and white and two tiny grey ones.  The pink collar means it is a girl.  Jack, who looks exactly like her but is far more energetic, was adopted yesterday.  This one, (no name as yet) is sweet and cuddly, if a tiny bit shy. 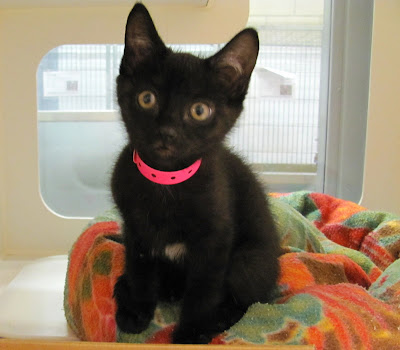 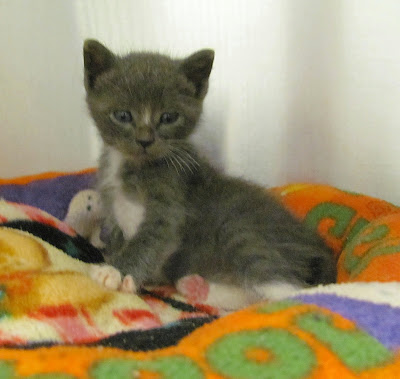 Sorry this is blurry, but I was trying to hold its brother, (or sister) back in the cage with one hand while I took this picture with the other hand.  Finally I had to close the cage door before I lost one of them. 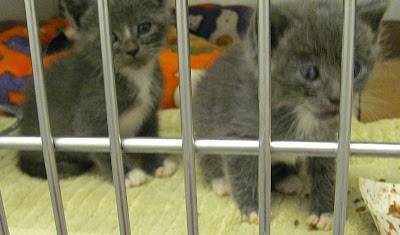 They are both too young to be adopted, but are being taken home to be fostered until they are old enough to find a permanent home.  Very lively and playful. 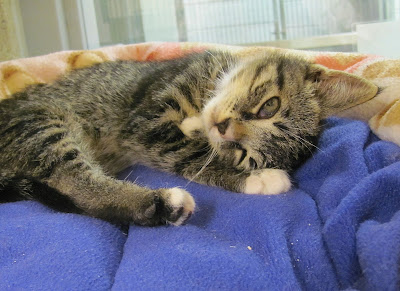 This one has a sister in the other half of the condo.  Both females .  They were sleeping alone when I took this photo and I missed a cute shot of them both sitting up perkily side by side like twins. 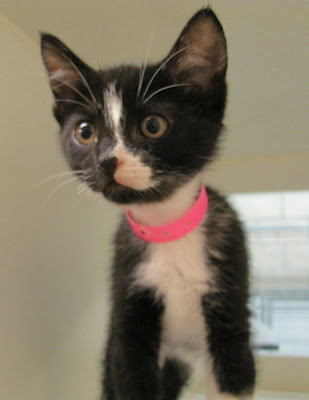 This one looks a bit scrawny in this photo, but she will soon fatten up.  Kittens have access to food at all times including luscious wet food of "stinky goodness", as I have seen described on other blogs! We also have to check the tightness of their collars because kittens grow and collars don't.
Now don't get carried away with the cuteness of kittens, because we have  a good number of fully grown cats, who are just as sweet and cuddly.  I'll show some of those tomorrow.
LOOKING FOR A PET?  VISIT YOUR LOCAL ANIMAL SHELTER.
God created cats because He knew we needed something to purr at us once in a while.
Posted by ChrisJ at 5:29 PM

What an interesting array of kittens. Every color. You must be having such a good time Chris...I'm thinking some of them will become work on your stetch pad.

Leaving for Tahoe on Thurs. Don't know how good internet will be up there, except at Starbucks...So I probably won't be posting as much.

Hope you are feeling better.

I have alwaqys been entirely too susceptible to the cuteness of kittens. What charmers!

These little furry cute gals and gals are cute...since I been feeling a bit blue lately I myself been thinking of adding a new member to the family, either a pup, a kitten or a rabbit, however not sure how much my grown dog and grown cat would take to a newbie especially a rabbit.

Ooops let me make an correction here...I met to say cute gals and guys, not gals and gals. lol

The tiny little nameless darling in the top photo looks SO much like my lovely boy Barney.

How can you leave them behind? I'd end up taking them all home. And I'd be 'that mad woman with millions of cats'. I just know I would!

Oh they are all so precious and just make my heart melt. Alas, I already have 3 cats (and a dog) and I just need to stop now. LOL

What gorgeous kittens! The little tabby reminds me of our two - they are so sweet. thanks for visiting my blog and leaving such lovely comments. I'll be back to visit you again:)

They are all just TOO cute!

Oh they are so cute, i like a lot these pictures. I have at hom 3 cats, but not so cute like yours unfortunately.