I'm going to be quite brazen about this, because mostly I have TESTS (medical) and THERAPY (physical) on my mind for the next two weeks.  So I'm giving my book "The TALE of Robin Lyth" a shameless plug. 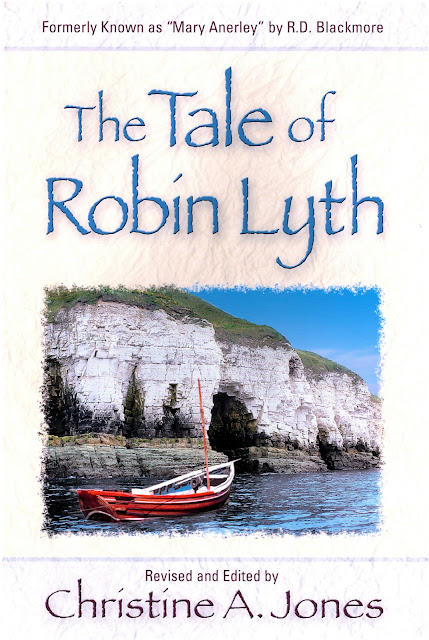 This book…was originally written in the 1850’s, by R.D. Blackmore, (author of
“Lorna Doone”) and was entitled “Mary Anerley”. However, for today’s reader “Mary Anerley" is a long and rambling account, full of microscopic details and encompassing more than a score of characters. Yet it is a historical and authentic description of life in the small fishing village of Flamborough in East Yorkshire, in the 1800's of which Blackmore was an eyewitness.

So that today’s readers may enjoy the adventures of Robin Lyth and Mary Anerley, I have updated much of the vocabulary of his book and removed the extraneous material that did not directly relate to the story of Robin and Mary. Even so I have endeavored to preserve the quaintness of the vocabulary, the wonderful descriptions and observations as well as the satirical style and wry humor of the writer. Now I hope you will agree that the book is a delight to read, as with tongue in cheek, Blackmore describes the escapades of Robin and Mary of Flamborough Village and Headland.

SYNOPSIS
In the late 1700’s a very young child is found asleep under a fishing coble at the North Landing, Flamborough, (East Yorkshire).  The child is adopted by a local fisherman and his wife and grows up to become Robin Lyth, a gallant ‘free-trader’ with a charmed life.  Robin falls in love with Mary Anerley, a farmer’s daughter from Dane’s Dyke, Flamborough.  Mary’s family discourages the match because of Robin’s obscure origin and free-trading occupation.
Not long after rescuing Mary from certain death, Robin declares his love for her and promises to give up his life as a smuggler after he has completed one last contract of smuggled goods.  Unfortunately, this time Robin is trapped in a cave by the coast guard.  He makes a daring escape, but in the confusion, the captain of the coast guard is shot and killed.  Robin is declared the murderer and he flees to France, leaving Mary behind.
How he is exonerated, the mystery of his birth and his quest to live 'happily ever after' is "THE TALE OF ROBIN LYTH"

*******
This is my entry for Mrs. Nesbitt's abc Wednesday.  For more interesting and intriguing submissions to this fascinating and educational challenge please click HERE

Such a tale! A book I'd enjoy. . .thanks for sharing your t's and good luck with your therapy.

I`m sure I would enjoy your book too. It must have been fun and quite a challenge to simplify the text without taking away the character of the novel.

I do hope that your tests will not be unpleasant and that the results will be good ones.

Quite a tittilating tidbit Chris. I just might have to read this one.
Hope your tests and therapy go well and that everything will be TERRIFIC again. (:0)

Loved your tagged answers, Chris. One of these days I'm going to sit and read this book. I just need to find some time when I'm not pressed!

Thanks for sharing the terrific book information! Good luck with tests and therapy!

cool. one of the ABCW bloggers recently asked whether books should be rewritten. a lot of people are in the NO camp, but I'm a bit more forgiving, especially when the source material is not a classic, as in this case.
ROG, ABC Wednesday team

Well I have been meaning to get a copy and not quite got around to it, you have just crystallized the decision to go get it.

Go on,plug away...no use hiding your light under a bushel!!
Good luck with the tests, I just went through some less than pleasant ones but 'zoned' out through the whole thing.
Jane x

It sounds wonderful and I am so glad you gave it this plug! Keep us posted!

I think you have every reason to be 'brazen' about promoting your book. You did a superb job on it, ChrisJ, and it is well worth reading! Those have haven't yet read it won't be sorry when they do!

You go girl, that was a wonderful plug.

You gave such a small "teaser" I'm hooked. Will have to read the story in full.

Have you in our prayers for the tests, and doctors appt.

Leave Tahoe tomorrow for home. It's been nice, but there is no place like home.

Yes Chris, your comment came through just fine.
I have been so frustrated the way Blogger works sometime and then it becomes very fickle. Some people I can comment by going on as anonymous and others not at all.
All that said I am still thinking of you and keeping you in my prayers.

Enjoyed your review - sounds like a good book. Also like your kitty Bailey that you have a photo of in your sidebar - very handsome!

Hi Chris !
Happy to read you can understand my french now. That is not the same for me when I read your english !!!

such a charming tale - goof luck with the tests