...A is for ANACHRONISM
I first came across this word when I was about six years old.  Perhaps it was because it was such a big word for a six year old that I remembered it.
We were in Sunday School. It must have been near Christmas time because
the teacher had asked us to draw a picture of Mary and Joseph and the Babe in Bethlehem.
The picture below is something like what I drew.  I remember clearly because it drew some comments from the teacher and other students. That's when I first heard the word ANACHRONISM.  I had made the mistake of including two anachronistic items in my picture -- the airplane and the electric light, both clearly out of their time in this picture.  I was so embarrassed when this was pointed out to me rather scornfully by my brother. 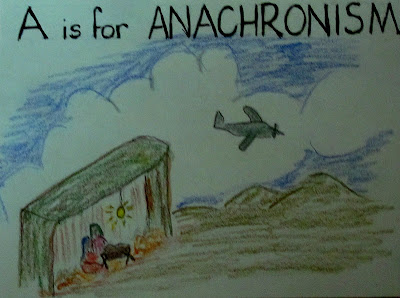 ANOTHER A - WORD that caused me some embarrassment was ALIEN.
By this time I was I was fifteen years old and had been called upon in class to read a poem out loud about 'Ruth' who 'stood amidst the alien corn'.  What she was doing there I have no idea but she caused me some problems because I pronounced the word 'alien' as 'a-lion'.   I remember this incident as clear as day in all my school girl self consciousness, as I was corrected by my teacher, and several other students around me.  Fancy being fifteen years old and not able to read properly!
Ah, our happy youthful days were fraught with such traps that just waited for us to fall into them, and never forget the anguish they brought us!
**********
So here we are at the beginning of another round of Mrs. Nesbitt's ABC WEDNESDAY.
Round ten in fact.  Do join us by posting an entry for the letter A and then click on this LINK to take a look at what all the other intrepid adventurers in ABC Wednesday have come up with.
Posted by ChrisJ at 4:36 PM

There are some events in our life that we can't forget and in later years we wonder why and how come it happen. ^_^ Happy Wednesday!

Boy, I relate to these kinds of embarassing moments in youth. I do love the picture of Mary and Joseph..and I'm sure she appreciated the light in that dark cave, and I hope the plane didn't wake baby Jesus.

Chris...you are delightful to read, and after those moments you spent your life teaching...how great is that!!!

I have those unforgettable moments too.

An Apple A Day, an artsy thing.

Yes, I remember being returning to the 6th grade classroom after a sickness and asked to spell ANXIOUS. I spelled it without the I, and I was mortified.

You have a good head for long words, and you remember them.

My embarrassing moments came very regularly at school. Being badly dyslexic, spelling was always a mystery to me and I learned to read by word shape, reading each word as a symbol rather than breaking them down into individual letters. So reading aloud was always a source of embarrassment since, much to the amusement of my classmates, I would regularly read out the wrong word entirely, like detonation instead of donation and so on.

Oh, vocabulary is a wonderful thing to master!

Oh the embarrassments of childhood. They really stay with us forever.
I do love the charming nativity picture to explain that word.
You are off to a wonderful start in round #10.

ANACHRONISM what a word ! I don't even know the meaning now, in German it's the same word I looked in my dictionary, lol !
Now I will see what it means exactly !

You found two good A words! Thanks for this story. Thanks also for promising to erect a statue for all faithful and loyal cats!! Lol.

Sometimes I think embarrassment is one of the strongest emotions. I can certainly remember embarrassing moments for many decades. Great A post.

Thanks for sharing! We all have those embarrassing moments, but we all aren't so willing to share them.
~Vicki~

thanks for sharing, I learned a new word today.

Hello Chris !
I see you are beginning another ABC Wednesday with a very good post.
A is for Anniversary today on my blog.

I can still remember a day when our English teacher came into class and wrote the word 'gambolling' on the blackboard. I knew immediately that it referred to me. We'd had to do an essay about Wuthering Heights and I meant to say that Heathcliff won the house through 'gambling'. Miss Addinall was never horrible enough to say who made the mistakes she featured in her lessons - but my face was red enough to tell the whole class!

Thanks for your message over on my blog about the Twinchies. They're a perfectly valid form of art (and SMALL!) too. I understand you can buy them ready-cut in the States. I'm looking forward to seeing them. Which blog do you plan to post them on? Will it be here or your art one?

Chris I finally posted the black and white watercolor I did of a cat and daisies on my Art Blog.

It's dedicated to your love of cats.

cute flashbacks :) always love to hear new words to feed the brain vocabulary. My "A" for ABC Wednesday.