Please Bear with Me

As you can see I am trying to make some changes to the appearance of my blog. The thing which is giving me  the greatest problem is the banner photograph.  I can't find anything that tells me what size photo I can use that will fit the space. In the mean time the picture above is my watercolor of Dane's Dyke, Flamborough Head, where I spent many of my childhood and teenage years.

Having spent two solid days on the computer I think I'll have to take a break! I've also been moved to the new interface for posting, which I don't much care for.  Somewhere I saw a button to return to the old interface, but who knows where? I'm also still wrestling with Windows 7 and Microsoft 10, both of which are new to me. Am I having fun yet?....Hmmm. 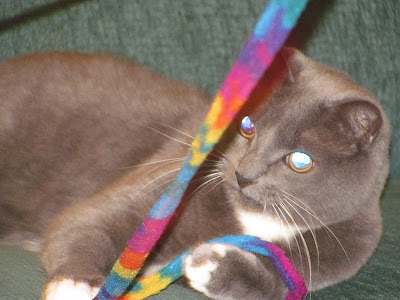 But just so you haven't visited for nothing, the update on Scruffy is that he seems to be fine.  We suspect he has been mooching around the kitchen floor and finding scraps of turkey or ham.  People food does not agree with him no matter how small the amount.  He is still active and playful in spite of his age -- hence the fuzzy photographs -- he moves too fast for me. 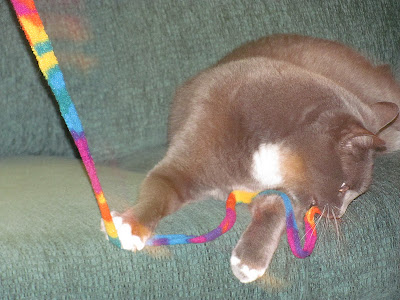 You will notice that he is still sitting down! But his favorite move is to pounce from the sofa on to the wand. It all helps him keep his slim school boy figure!

Additionally, dare I tell you that our temps in the day time have been around 80 degrees.  Cold overnight though.

It's still not too late to wish you a Happy New Year!

Great post. I have to say I had lots of problems getting my banner picture right and I'm afraid mine was just good luck resizing the picture loads of times until it fit. Glad the cat is okay. Mine only eat dried food with lots of water.

I spent frustrating hours just before Christmas trying to rearrange my page. I had to leave the banner photo finally in sheer frustration. I don't see the advantage in the newer interface, but perhaps it is beneficial to cudgel our brains over such things!
I hope Scruffy's tummy trouble is over. One of our now older cats has delicate innards--cleaning up after her is a ceaseless chore---we do it because we love her.

I'm clueless when it comes to photo sizes, but I do like your picture of Dane's Dyke.

if you have a Google account you can do it in Plcasa. It's free. Look at my"Learning New Things " tab. There should be a link to "CLOVER LANE"where Sarah will walk you through the steps. Part of how well the header fits is what you use as a background.
~Vicki~

Chris, head over to shabbyblogs.com, she has many tutorials that are free and that is how I learned to add and change around my header! Good Luck, keep trying!

Boy, do I know how frustrating this whole blogging, photography thing can be! My poor brain just can't wrap around all the new jargon and directions. I guess that's why my blog has stayed the same for so long. Too chicken to upset the norm.
Glad Scruffy is better and hang in there, I know you will figure it out sooner or later.
Happy New Year Chris.