MERE
This word, as I want to use it, doesn't even appear in my dictionary, which admittedly is only a paper-back copy of the Oxford American Dictionary (Heald Colleges Edition). We usually know the word when used in a sentence such as "He is only a mere child".

But it has another meaning and it is a good, genuine word when used as in the title of this photograph: 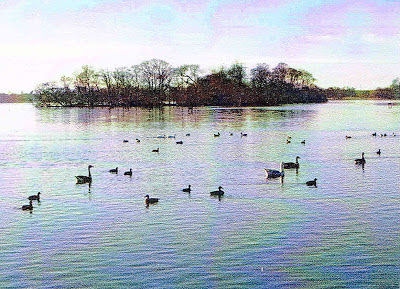 (Courtesy of Wikipedia)
British readers will know the word, I expect. It is another word for a kind of lake.  So what is the difference between a mere and a lake?

The most simple answer is that a mere is a shallow lake. At Flamborough we had a mere on the village green for many years.  It eventually disappeared, probably because the land was drained when new houses were built around the Green.  I remember it as a fairly large body of water but very shallow, which sometimes almost dried up.  The land was then muddy, boggy and swampy. When it had water, it wasn't deep enough to hold fish or sail a boat on unless it was a toy boat.

Hornsea Mere, just down the coast from Flamborough is in a whole different category.  It is large enough to have a marina and a thriving sailing community. It is also a great bird migratory area and well known by avid birders. Hornsea Mere is the largest freshwater lake in Yorkshire. But it is still shallow.

In putting together this blog I learned something new  about meres -- as well as a new word. A mere is a body of water that is broader than it is deep and it usually has a THERMOCLINE.  This is a layer of water that is  like a blanket that separates the cooler, deeper water from the surface water. Since a mere doesn't have much, if any deep water, the thermocline often mixes with the surface water.  Sunlight and wind-waves affect the temperature of the water at the surface.

If the mere is deep enough to contain fish and you enjoy fishing, it is in and around the thermocline that you'll find them because that's where the oxygen is  (nearer the surface) and where the fish will look for food.

So here ends your fishing lesson for the day.  But more importantly we have learned at least two new words:
mere (if you didn't know it before) and thermocline.

This is my entry for ABC Wednesday, the fascinating project begun by Mrs. Nesbitt and now hosted by Roger Owen Green.  Click HERE to see more entries in this project .  You never know what weird and wonderful things you may find.

Does that mean that Lake Windermere is named twice?!!(hehehe).
Jane x

Well I've never heard of a mere as you have posted. Learned lots today.
Ann

Roger is funny! It was really interesting...Chris, always the teacher, and I love it and learn so much.

I didn't know that word, either, except as the French for "Mother." By the way, I got as far as Whitby this summer! Gorgeous area!

Nice 'M', but at first I thought you were talking about Horsey mere in Norfolk, and then I read it again (Dyslexia lures!) Norfolk has both meres and broads and both terms seem to be interchangeable, since broads are shallow lakes, although most of the meres in Norfolk are not all connected to rivers, whilst all broads are. The word mere is closely connected to mare, which is a corruption of an older Saxon word for sea and is found in many place names in the UK, such as the seaside town of Weston Super Mare in Somerset. Also the Moon is covered in names followed by mare, so named because these darker areas were once thought to be seas. So a mare is a sea whilst a mere is just a mere lake : )

I remember both Hornsey Mere in Yorkshire, and Horsey Mere in Norfolk - it's easy to get the names mixed up! Horsey Mere was a favourite place to moor, during our Norfolk Broads cabin cruiser vacations when we were little. I also remember the mere on Flamborough Village green. We used to slide across it on our tummies when it was frozen in the winter!

My very big dictionary gives me different meanings of this word. Adjective or name.

I love the photos that comes with the article!

Manok... find out what it is
Rose, ABC Wednesday

Wow! That is really interesting. I didn't know that *mere* had a double meaning. Thanks for expanding my brain a little today! :-)

Cool info...So if I am merely stopping by, am I a shallow person? Am I broader than I am deep? I"ll have to peruse on this!

The word "mere" always makes me think of "Mere Christianity" by C.S. Lewis. I love a lake being called a "mere", that's lovely.
By the way, still remembering that lake where you had that wedding, so pretty.

Very interesting, and such a nice comforting word, - it has a lovely murmuring sound.

Jane and Chris: You're probably right about Windemere. Interestingly enough the next lake north (I think), is Buttermere and I don't recall it being referred to as Lake Buttermere, but just Buttermere. We spent part of our honeymoon there.

Snafu: You're right too but for the sake of our Irish, Welsh and Scottish readers I should say that 'mare' predates the Saxons, first by the Latin (Romans)and before them, the Celts had their own similar version.

Roger: You really foxed me. It took me half the day to realize what you were referring to..Duh!.... and I DID learn French (a long while ago.)

Actually the Dutch word for lake is 'meer', which is pronounced the same as the English word mere. And in German the word Meer means Sea!

But whatever language: if you fall in it: you will be wet!!!

your mere looks like my western springs, looks only, because our lake is a living spring.

your mere looks like my western springs, looks only, because our lake is a living spring.

Lovely photo and so many ducks ! BTW I looked up the word "mere" in my dictionary and it said "used to say that something or someone is small, unimportant, etc. ▪ She was a mere child [=she was only a child] when her father died. ▪ His voice did not rise above a mere whisper." See, it still exists.

Thanks for the great and informative post.
I hadn't a clue what that word meant before though I did think it had to do with water as Mer or Mar are water words...
I guess that's why I love blogging. There is so much to learn.
Have a great day Chris.

I never really thought about that word....funny how blogging will bring you so many things to learn about...lovely photo. cheers.

I learned something new and also enjoyed the comments for your post (some humorous and some informative). I've also been going back over the blog, since I've been a bit out of touch. Love the inchies, the happy pictures of you swimming, and the wonderful wedding photos too. What a great way to celebrate with so many outdoor pleasures.

Home Based Business Join Now without any Work
Earn 400% within a Month
Payout within 24 Hours with Perfect Money, OkPay and EgoPay
Join Now
Dollar-Inv.co