FLOWERS AROUND THE PATIO

The patio is the focal point of our back yard.  We have several bird feeders and a fountain at one side and a small waterfall at the back.  We always have some pots of flowers blooming most of the year because of our mild climate. Most of them are geraniums, begonias and impatiens. 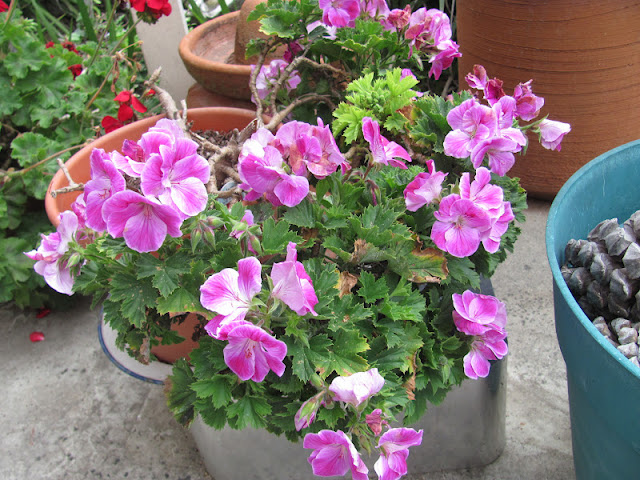 These are a variant on the regular geraniums and bloomed profusely most of the winter. 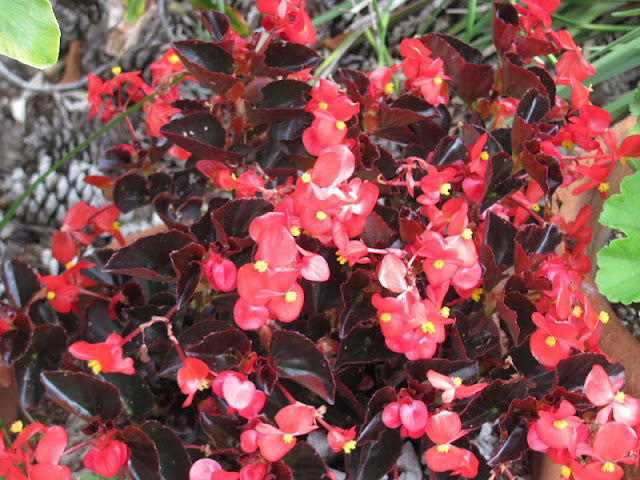 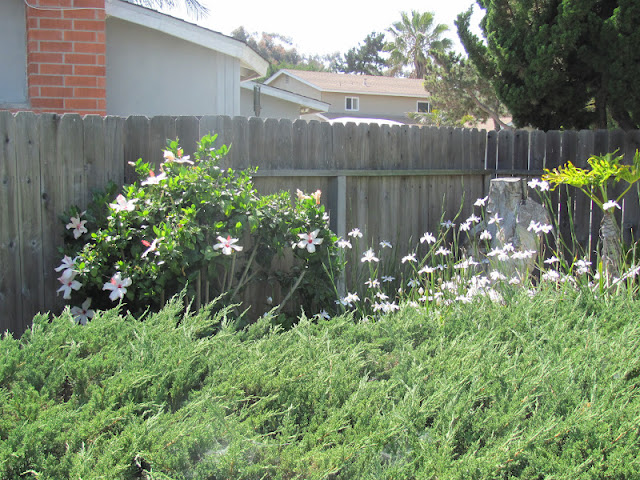 There are two hibiscus bushes and a bunch of fortnight lilies that never seem to stop blooming. 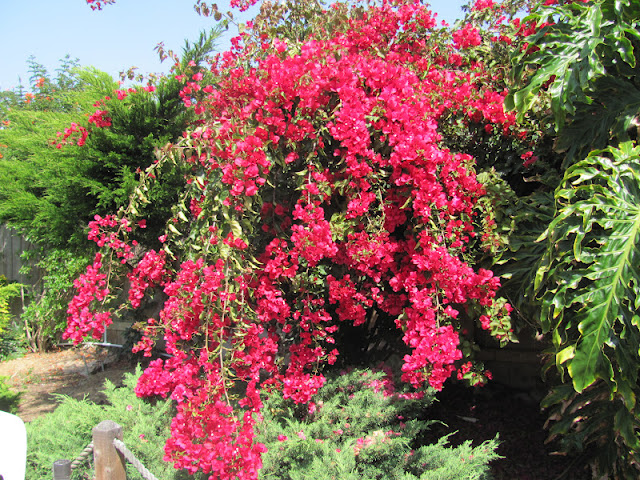 This bougainvillea is one of two that have been heavy with blossoms for months. 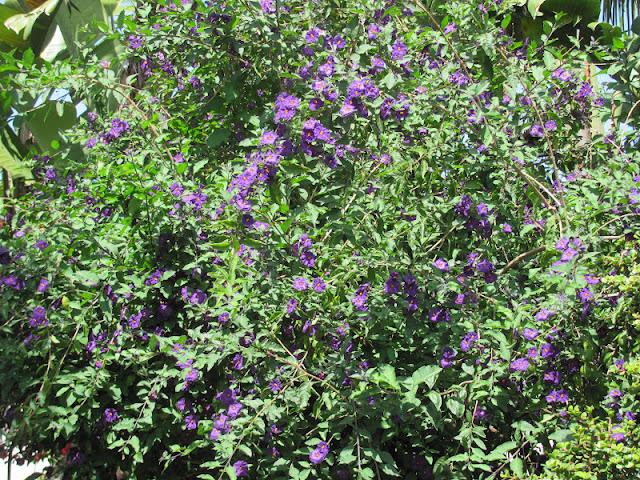 But this royal robe potato vine has never stopped blooming for more than a year now.  It spreads out over the bird feeders and the fountain, and makes a fine shelter for the birds as they wait their turn at the feeder.  We have had two cool summers and a mild winter up until now and I guess that must have been what the flowers and shrubs like. 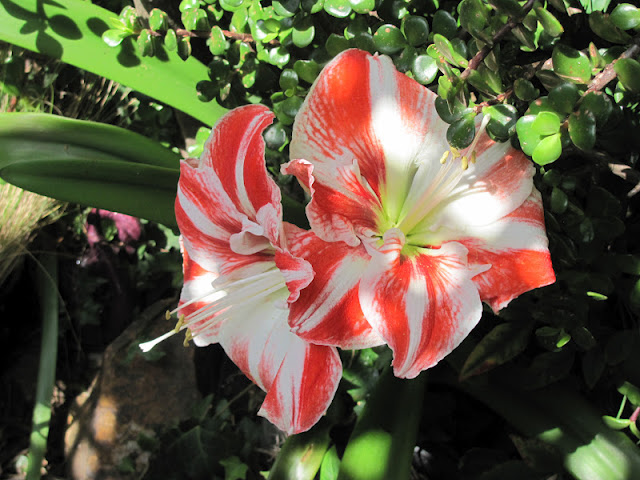 These two Amaryllis blooms have surprised us for  the past two summers.  It was an indoor plant that we were given for Christmas a few years ago and when it stopped blooming we just planted it rather haphazardly not far away from the waterfall.  Now for the last couple of years we've suddenly seen these large showy and very beautiful flowers suddenly pop open. 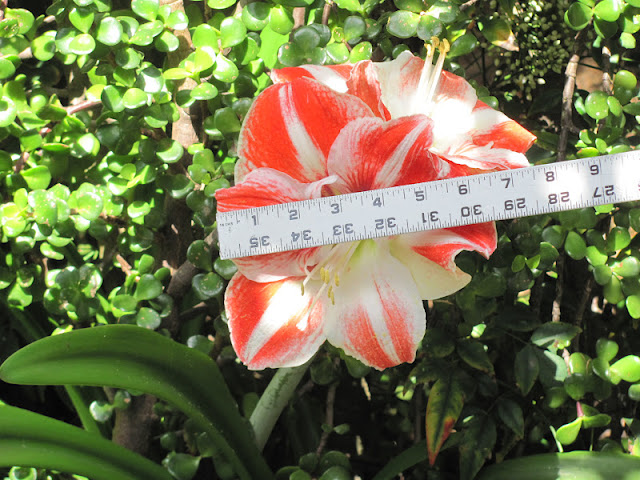 This one is 7 inches across and the one behind it is just about as big.  We don't profess to be great gardeners and usually do what is barely needed.  But Barry uses Miracle Grow to fertilize the plants and that's about it, other than keeping them watered.  So we are truly blessed to enjoy all the benefits.  It is only this week that the weather has been warm enough (in our opinion) to sit out there on the patio.  It has to be 72 degrees before I will sit outside, which may seem picky to some but we have become acclimatized to (and spoiled by) our semi-tropical climate. 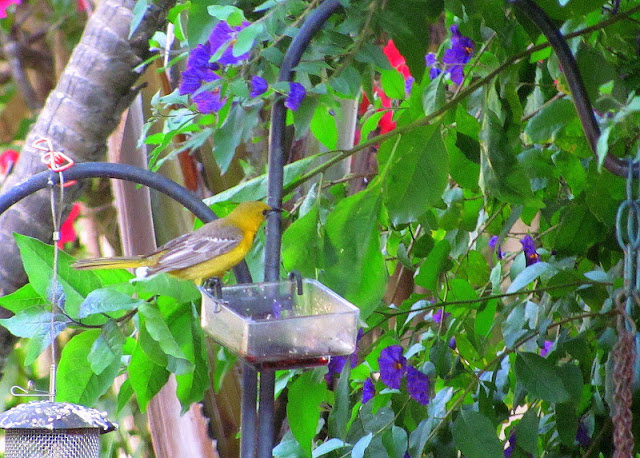 Here's somebody else who has become spoiled. You may have to look twice at this photo before you see the female oriole perching on the plastic dish.  We have at least one family that visits us every year.  They come in the middle of April and leave again in the middle of August.  So far they have gone through half a squeeze bottle of grape jelly already! 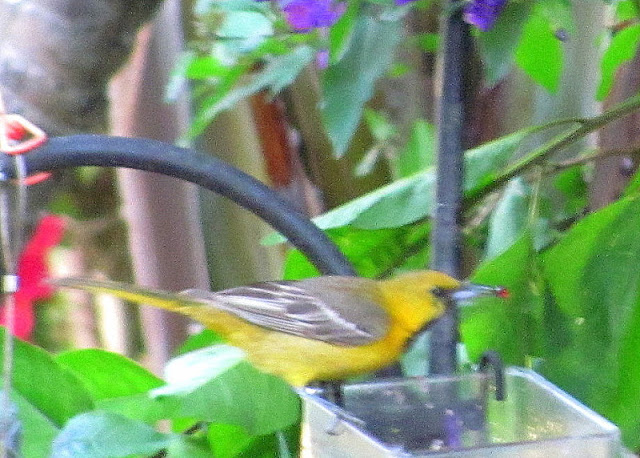 I cropped this photo so that you can see the grape jelly in his beak, so it is a bit out of focus.  This is the male -- more brightly colored than his wife and the juvenile.  You can see the black patch under his chin. 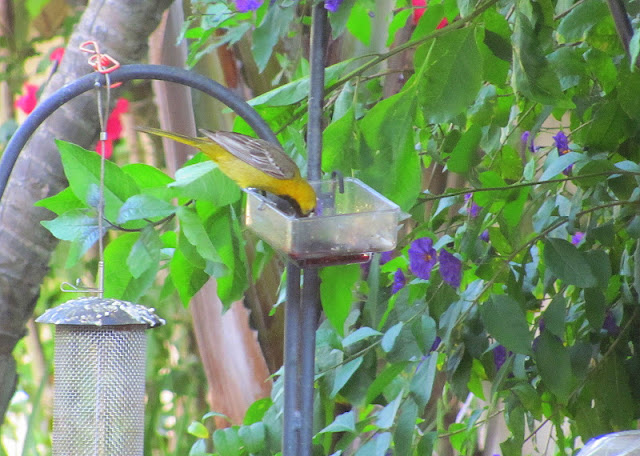 Here he is feasting himself again. He doesn't stay around very long, but comes back frequently.  I have also seen the female taking a bath in the trickling water of the waterfall. They are hard to photograph because they don't stay still very long.  In actual fact, the house finches and sparrows also enjoy the grape jelly, so we can't blame all the greed on the orioles.
Posted by ChrisJ at 8:19 PM

Amarylis are most decidedly an indoor plant here! We had one this winter - a gift - and it was so beautiful but it will be indoors all year and we are hoping ti will bloom again this year.

Our patio has pots of colour from Spring to autumn but this year has been so mild we started with them in mid-March. A record for our Merseyside garden.

I've never heard of fortnight lilies - they look lovely. Can we have a close-up sometime please?

Grape jelly....?? Who would have thought. Next they'll want peanut butter! HaHa.

That may be cheaper than the bird seed we go through!!

Your patio is so lovely Chris. I remember when Jill lived in San Diego, her beautiful flowers.

Thank you for the interesting tour of your back yard.
Hibiscus has been a new flower for me here in KY--it dies down to the ground in winter and reappears each spring. I think we're a zone or two cooler than where you live as the other plants are unfamiliar to this climate.

You have a very favourable climate for flowers that we can only grow indoors. You have some great blooms. As I once posted, I have an amaryllis that is around thirty years old and it keeps blooming still, so you should be able to keep yours for some years to come.