Here we are in the thirteenth round of our wonderful project ABC WEDNESDAY.  I had a couple of options to choose from for the letter A, but I decided to go with 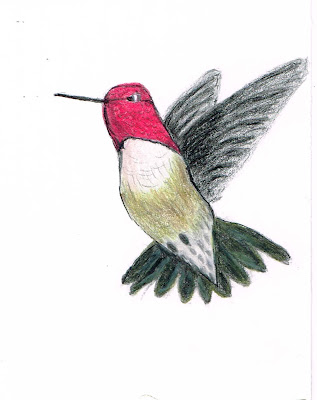 My rendition of Anna's Hummingbird
based on the picture in my bird book.  Done in Prisma Color pencils.

It was not hard to think of this bird for the letter A as we are surrounded by them down here in Southern California.  Most of the time if you see a humming bird around here it will probably an Anna's, although we do have others.

Some facts about the Anna's humming bird:

1.  It is only found on the west coast of America from Canada to Mexico.
2.  It is about 4" long, approximately
3.  It has an impressive mating ritual which consists of loud squeaks and dropping like a stone from the sky.
4.  It is highly territorial, feisty and aggressive.
5.  It is the only humming bird that has its head and neck completely covered by an iridescent ruby-red color, that looks black until the sun shines on it.
5.  It can shake its body 55 times a second, which it does to shake off dust and insects, rather like a dog shakes off water, and thus holds the record of being the fastest vertebrate on earth to be able to do this!

Now THAT'S a piece of information we can't live without, I'm sure!

Finally, it is named after Anna Massena, Duchess of Rivoli, (1802-1887) whose father was an outstanding general in Napoleon Bonaparte's army.  Rivoli is a city in the municipality of Verona, Italy.  (So she could be known as "The One Lady of Verona"  -- Groan here! )

The thing I couldn't find out was why the bird was named after her and who named it thus.
She was certainly an attractive woman and we can surmise why the bird might have been named after her.   I  would love to know more about the connection, but I share with you all I have been able to discover so far.

Anna Messina, Duchess of Rivoli
after whom the humming bird is named .

Fascinating information about this tiny bird. I once had a student in grade 4 do a research paper on the hummingbird...he was a small boy (for his age) and he learned that small is not necessarily weak!

I learned something new! Great interesesting post! Love your drawing as well!

Oh how I love hummingbirds Chris.
We have several that buzz around our Manzanita tree. I have seen the Anna around here too but I think the couple that like it here are not. I think they are Rufus.
Terrific drawing too.

Women have been called birds in slang a long time - "my swan, " e.g., so i wonder if that plays into the naming...
ROG, ABC Wednesday team

Lovely start to a new challenge, Chris. Nice drawing, too! I didn't know all of that information. We have a very plain green hummingbird up here...not sure what it's called, but I love to see it flitting around in front of the living room window.

She was a pretty young lady and fascinating that the hummingbird was named for her.

Love all this information. She's a beautiful lady, no wonder someone named a beautiful creature of nature after her.

Very intersting Chris! I also wonder why the bird was named after this duchess. Was she ever in your country or was a Frenchman there and did the bird remind him of her?
Fascinating, isn't it?!
Have a great week and thanks for this delightful post.
Wil, ABCW Team.

A double coincidence! I spent some time so time photographing hummingbirds when we were in Nevada, but I didn't know they were Anna's until now.

Very interesting information and so educative!!

Chris, I love hummingbirds and your story enchanting. We see hummingbirds when we visit family in Colorado but they are very few here in Kansas. Your drawing so pretty and well as Anna.
Ann

I have never seen a hummingbird life ! I saw movies, documentaries etc but never te bird. I looked up why the name of the bird was related to an Italian duchess, but couldn't find the answer either ! Maybe she squeaked loud and shaked her body ?

Nice to have this kind of information about the origin of names, - lovely bird and beautiful namesake.

wow, thanks for the nature lesson with your beautiful drawing! Is Prisma the name of the company that makes the pencils? I think I'd like to get some.

i LIKE a bird to be named after me. There is already one, snowy owl. LOL, My Chinese name is snow.

Gosh I loved this! I did not know all that about Anna's and we have a lot of them around. What an interesting posting. cheers.

I hope this isn't too much information, Chris:-
René Primevère Lesson (20 March 1794 – 28 April 1849) was a French surgeon, naturalist, ornithologist, and herpetologist. He served on Duperrey's round-the-world voyage of 'La Coquille' (1822–25), during which time he collected natural history specimens including a number of new species.
Quite often the first person to identify a creature or plant as a new species gets to give it its scientific name. In this case Lesson also gave it its English name, naming it after Anna who had the important role of Mistress of the Household to Empress Eugenie, the wife of Lesson's king, Napooleon III.
It was quite common in those days to dedicate books and discoveries to royalty and other important persons, often in the hope of patronage or pensions.

Fantastic information, Scriptor!! Thank you so much. Where did you find this information? You are a man with all the answers.

Wonderful information about this bird, i'm not certain if we have that kind of bird.

I love your rendition Chris.

Chris, your hummingbird is SO beautiful. I LOVE it! Well done. :)