We went down to San Diego last week to meet up with an exchange teacher from Scarborough in Yorkshire. Since this is the next main town up the coast from my beloved Flamborough, we thought we might have a lot in common. And we did! We had a great time, probably wearing her ears out, discussing many things about 'home.'

Lisa, the teacher, told us that she didn't think she would be able to live in America because she would miss Yorkshire too much. I could certainly identify with that, so we came to the conclusion that the best plan would be to spend the winters in San Diego and the summers in Yorkshire, (British weather being what it is!) 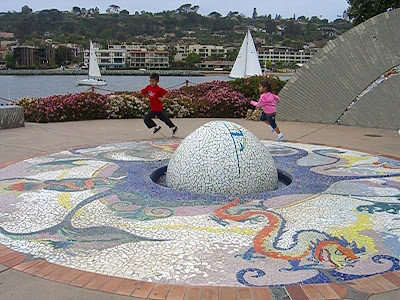 Because Lisa had already been taken to most of the well known beauty spots in San Diego -- and there are plenty of them -- we took her to the two 'islands' of the city, which are not really islands but peninsulas. On Harbor Island we had lunch at Tom Hamm's Lighthouse which has a magnificent view of San Diego Bay. We didn't see the whale that everyone has been talking about, that some say has lost its way in the bay.

Then we went to Shelter Island and discovered that the city has built a very attractive mini-park at the end of the peninsula. In the center of the area is the large mosaic of the world and other cultures. The children seen in the photo spent their time and energy running round and round the mosaic as fast as they could, until they got dizzy. Then after a rest, they started again. 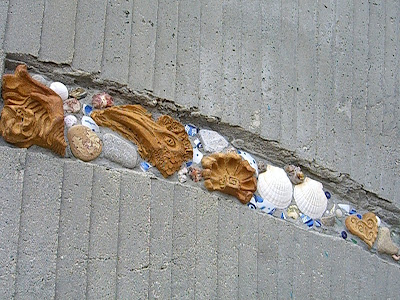 Surrounding the mosaic area were several semi-circular walls, sort of like the setting sun. The walls were decorated with the step-like pattern you see above, and set in them were slashes of of undersea themed decorations, also made of mosaic, smooth glass and shells. Very intriguing and attractive. 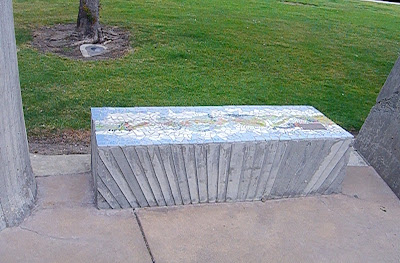 The were also several cement benches, which is a terrible description of what was actually very attractive also. The seats were set with mosaic and the base of the seat repeated the step-like texture of the walls.

All this was surrounded by an area of green grass and looked out over part of the bay where there were plenty of sail boats out having fun. Presumably many of them were looking for the whale. 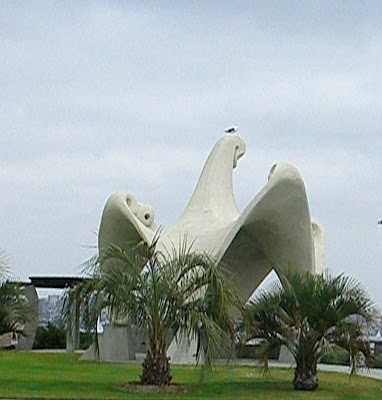 At the entrance to Shelter island was this fine piece of artwork representing, I presume, a seagull. It was quite spectacular and very large. Another seagull seemed to appreciate it as a resting place also.

I do like some of the modern out-door art that is being displayed these days. Some of them are just 'over the top' but this was definitely an asset to the area.

San Diego is truly a beautiful city!
Posted by ChrisJ at 1:22 PM

Looks like you enjoyed your day - gotta love the sea gull!!

Thanks for the mini-tour. The sculptures are really interesting; but for a quick moment I thought that seagull was a giant Henrietta!!

I need a trip to San Diego. Usually when we visit our daughter in Cardiff....we never get into S.D.

You have shared some wonderful places to visit.... Thanks

Very nice Chris ! I love the big statue of the seagull.