What Good Hubbies Do...

... they pick up oddments they think their wife would like, such as these star fish which were used as decorations at a wedding he performed. He knew I would like them but didn't know what I would do with them -- neither do I actually, at the moment, but as he said, "Oh, you'll find something to do with them." And I will. 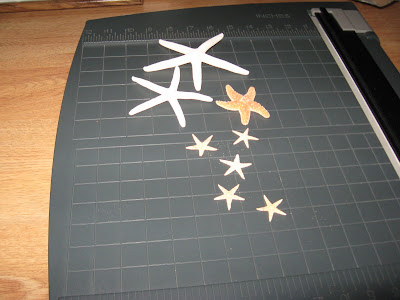 ...grab the camera when he sees something he thinks I would like to post on my blog, as he did with this spider's web. I was still in bed! 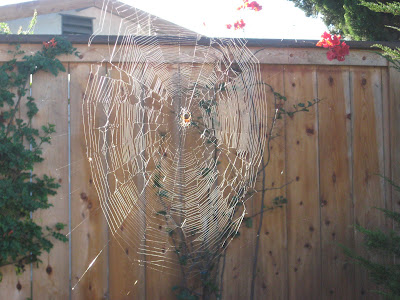 ...and then he saw the hawk on our water fountain. (I always keep a camera on the bookshelves by the patio window). 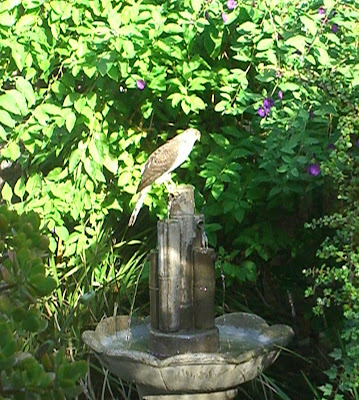 ...took me out for dinner at Fidel's for Mexican food, where I saw these flowers in the restaurant, and he waited around without being embarrassed while I took a couple of shots. Yes they're artificial, but I'm always looking for something colorful to draw and paint. I'll get to this picture soon, but my painting "To do" list is getting longer. 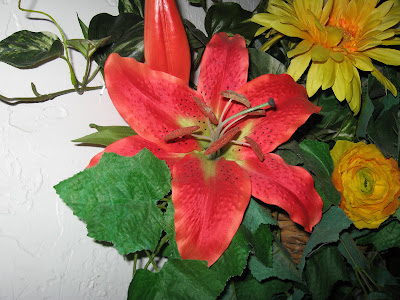 And best of all, he puts up with my eccentric ways which includes staying up LATE (to do my blogs and comments) and getting up LATE -- and he brings me a cup of tea in bed every morning, as well! Actually, I think he is afraid I will never get up if he doesn't!

If I told you the other things he does for me you would think I was a very lazy wife -- no -- just spoiled!

I did promise I would post some photos of Bailey doing something interesting, but the truth is, he just hasn't done anything interesting yet! (For those of you who are new to my blog, Bailey is my cat, NOT my husband).

My tribe of cats tend toward activities that are a bit too interesting--as in creating an uproar. Perhaps they encourage each other and Bailey as an only cat is bored?
So many times I miss a good photo--a bird moves from a vantage point near the feeder, the deer stroll off, everything MOVES while I'm trying to focus.
Tea in bed: I like the idea of that-and the kindliness, but I would undoubtedly end up spilling tea--and I would be mobbed by the cats who felt they should have their breakfast first.

Put the starfish into a shadow box and hang int he bathroom.

Popping by via Gil's blog :)

Wish I had someone who would catch the great photos that I probably miss! Not because I might be still sleeping, but because I can't be in two places at once OR because I can never find my camera when I need it!

MOTH's photos are ALMOST as good as yours!

I don't need to tell you, as I'm sure you will aggree, you are truly BLESSED. When a person has God first in their life, the fruit of the Spirit will be evident.
Thanks for the tip about my flowers, I looked up foxglove and I believe you are right.

How big was that spider's web, as it looks huge? Which makes me wonder how big was the spider who made it {{as she shivers}}

You do have a nice husband and you must give him all the best from me. I enjoyed that photo of the web - those are not easy.

PS Thank you for the nice comment :-)
You made the overstatement of the year :-)

Wow, your husband is a pretty cool fellow. That shot of the spider web is terrific. I was looking for a word in it like in Charlotte's Web. lol

Thanks so much for stopping by my blog and leaving a comment. I hope you'll come again...you're always welcome. I love meeting other bloggers. I've enjoyed myself here at your sweet blog. I had to chuckle about your staying up late to blog and comment and then getting up late...that's ME.

It is the littlest things in life that brings the best out of us from our love ones.

So no I wouldn't say your lazy or even spoil rotten.

By the way your husband took some good pictures here.

That spider web is something else. What kind of spider was hiding in wait?

great hubby! good choice on your part! Our other cat Ginger is just walking around the house, then outside then back in, staring at the back garden, checking where Patch usually slept, and rubbing up against us, climbing up in our lap, generally wanting attention - we have tried to explain the absence of Patch but he just doesn't understand.....I feel sorry for him.