...VALUABLE
.....which is what my little laptop is at the moment.  It is a Sony VAIO and was our only connection to the internet while we were away,  Now, although we have a new computer and printer, which incorporates a scanner, it is all I have to use for my contribution to ABC Wednesday. I haven't learned how to use the scanner yet.  So there'll be no photos. Sorry. Hopefully I'll have some next week.


For example, I wanted to post VICTORY CHRISTIAN HIGH SCHOOL for the letter V today, but to my surprise I have no photos of the school on the computer.  This is the place where I spent 22 years of my life! I have all kinds of documents and letters but no photos.  I do have some hard copy photos but can't scan them yet.  Hope to get some instructions tomorrow.  We are still fine tuning all the new stuff on the computer.


Anyway, I spent 22 years at this school, at first teaching Bible, then English Literature also.  I filled in for a little German and then later art and math. For the last 12 years of my time there (I retired in 2002,) I was the dreaded principal and a board member for many years.  These were some of the most fulfilling years of my life, and probably the most challenging.  Trying VALIANTLY to keep one step ahead of a bunch of teenagers is daunting to say the least.


The real blessings come later when you bump into a former student who is now all grown up. We have nurses, teachers, marines, naval career men, one in intelligence work somewhere, a number who have been in Iraq, Iran and Afghanistan, graphic artists, realtors, and even a professional skate-boarder -- not to mention Moms and Dads.

******
Last week I missed ABC Wednesday, but to prove to you that I was fully anticipating participation, here is the one photo that I took in preparation for last week's letter U: 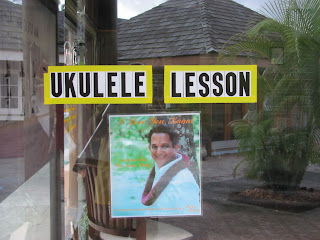 Being in Hawaii, Ukelele was a natural. But that was as far as I got.


Do visit ABC WEDNESDAY by clicking on this link as we are coming to the close of our 9th alphabetical round and we still have more than 100 participators.  Plan on joining the fun.

Hey Chris....You may not have pictures, put loved reading about your days as an educater.

To use my scanner, I had to have a photo program. In fact I have two. Corel and Windows Live Photo Gallery. They were a disk I downloaded. Sure your manuel will give you the instructions for your computer.

I need my own laptop. Three of us fighting over one computer is making us crazy.

Welcome back Chris.
Hope you figure out all that tech-ie stuff. My brain just doesn't want to learn new things...Just stubborn I guess.
Interesting learning about your life before retirement.

Enjoyed your words about teaching and the photo of the Ukulele Lesson.

Beautiful combo of the letters!

Please come and see the Voyage of the Mermaid. Happy holidays!

Very entertaining post! It is good to see former pupils - and their parents.

I loved the school my daughters went to for K - 8th grades. A wonderful Christian school out in WA. I still miss those days terribly, as well as the moms and teachers and school secretary that were my friends during those years.

Dad had a Ukulele, do you remember it? I don't know what became of it but I still have his banjo. He also used to play a Hawaiian guitar too and I have the slide from that but no guitar. I don’t think he took lessons on Hawaii somehow. I did not inherit any of his musical skills unfortunately.
Scanners are really useful but software for them varies a lot. I tend to buy Epson scanners which come with a really useful Epson package of software which can be set to fully automatic or professional mode with all the tweaks for nerds like me.

I am without computer at the moment and hopping on other folks' when I can. As much as I loathe the things, I do miss it... x

It is good you can teach Bible in school, Here in New Zealand , regular teachers arn't allowed. Churches can come outside school hours, but not many takers.

In NZ, this is among the first countries that legalised gay marriages.

Yes you do have a valuable laptop in there. I like Sony vaiao too. ^_^

Want to thank you for your visits. Sorry it's taking me so long to get back around. I don't know where my time goes. Seems Abe or I have had a doctor's visit at least once a week since about Oct. And now I'm doing therapy for my back. Hope it works. They did give me muscle relaxers but I took one and sure didn't like the way it made me feel, so haven't taken any more since. In case I don't get back around for a while, wishing you and your family a very Merry Christmas.