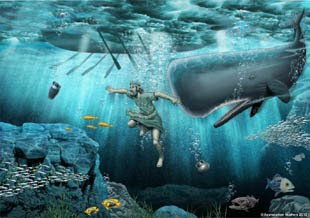 A  'JONAH' today is a very unfortunate person and often thought to be JINXED.  It was not because Jonah was swallowed by a whale that he was thought to be JINXED.  It began when he tried to runaway from the task the Lord had given him, and he went by ship.  Fishermen and sailors it seems, are quite superstitious and when a fierce storm threatened to wreck the ship, the crew cast lots to discover who was the person on board causing their misfortune -- "and the lot fell on Jonah".  JONAH was the JINX.  The crew threw Jonah overboard. It was because they thought he was JINXED that he came to be swallowed by a whale.

The fishermen from my village of Flamborough on the East Coast of Yorkshire it would seem are just as superstitious as the their forbears of the eastern Mediterranean.  They had a number of things that they were sure would JINX their fishing expeditions.  Since fishing was their livelihood they were very careful about what was allowed to be mentioned  in the early hours of the morning as they plodded down to the  North or South Landings leading their band of working donkeys.  To mention any of the following, according to what history we have of Flamborough, would be sure to cause great consternation.

The list of things that would JINX their catch begins with a priest or a woman who unwittingly crossed their path.  It was also considered great bad luck if anyone mentioned a hare, or a rabbit, a cat, an egg, a pig, a fox, or a goat whether they were baiting their hooks or on their way to launch their boats.  To whistle while out in their cobles (fishing boats) would  bring a gale.  ( I wonder if the saying "Whistle down the wind" would have had anything to do with that).

There is a story told, of an enterprising poultry and game dealer, named Nicholson, who went into a fisherman's cottage to ask if he wanted to buy any rabbits.  The fisherman was busy baiting his hooks at the time and replied with an emphatic "Neea!"   (No)
"Then will you buy a hare?" said Nicholson.
" Noo thoo's gan far eneaf," (now you gone far enough) replied the fisherman in a rage, "tak thi hook" ( take your hook -- or go away,) and he turned him out of the cottage! After that Nicholson always asked if they were baiting their lines before entering a cottage to try and sell his wares.

Another unfortunate slip of the tongue was made by a young woman in the presence of her father-in-law, a Flamborough fisherman.  She mentioned that she had received a letter from Foxholes (another village in Yorkshire). The lines were being baited at the time,  so consequently she was severely reproached for using such an unlucky word and her father-in-law gave up baiting for the rest of the day. His fishing was JINXED.

This is my contribution to ABC WEDNESDAY for the letter J.  This highly successful meme is now in its 13th round (and is not JINXED!).  It was begun by Mrs. Nesbitt and continued by Roger Owen Green.  To see more contributions from around the world that are both entertaining and educational please click  here.

My goodness! Such superstitions! But then that's what makes the stories about Yorkshire so joyful!

Interesting folk law. But how do the superstitious know which words are Jinxed? Is there a manual?
Coming from a sailing and boating mad family, which incidentally includes your parents, I have heard the phrase 'whistle up a wind' used when there was not enough wind to sail.

It is fascinating how superstitions begin and what seems to perpetuate them.
A really great choice for the letter J, Chris.

Oh, Chris , what a wonderful and interesting post!
Thank you! Have a great day without any jinx moments.
Wil, ABCW Team.