With the much drier and warmer(!) weather we have been having, my energy level was higher, so I decided to strike while the iron was hot, so to speak. (You do realize that has nothing to do with ironing, don't you. I've only just realized that as I was typing this today.) 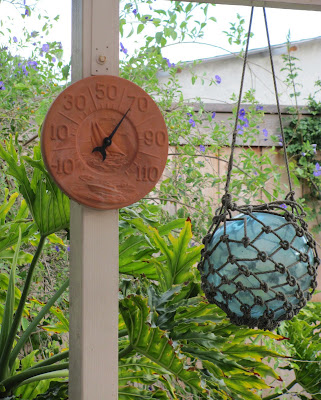 NEW YEAR'S DAY ON OUR PATIO

It was time to take down the Christmas decorations while I had the energy.  When we lived in England we always left them up until January 6th, but these days I have to go with what's best for me. 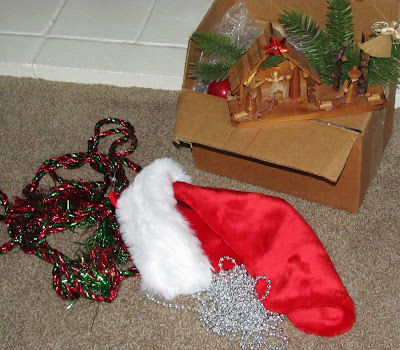 This was what was left of a very pretty center piece we had been given, so I put it outside on the patio table, so we could still see how pretty it still was, even though the flowers were gone.  I had also put out some bird seed on the table and the result was this... 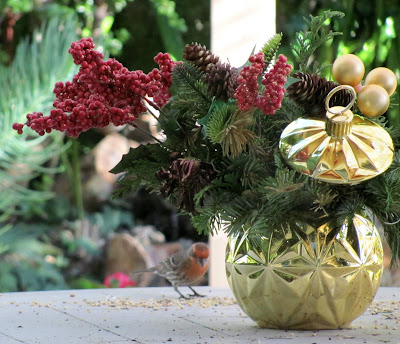 Yes, that is a real bird next to the golden bowl.  I should have focused more on him, but still it's quite a nice picture and the two different reds are quite distinctive. 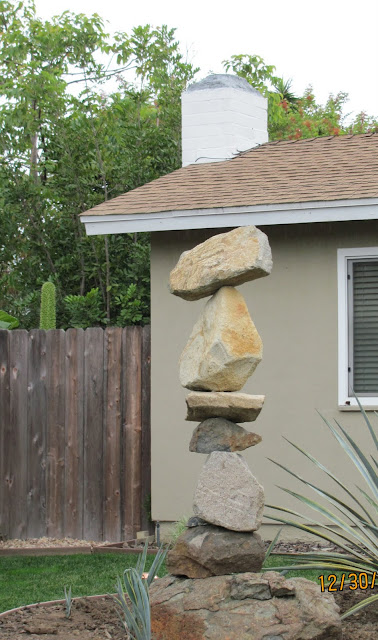 Living across the circle from us are several young men.  Don't know them very well but they are good neighbors.  This pillar of rocks in their front yard has been puzzling us for weeks.  They happened to be outside kicking a football around when I left to go to the store that day, so I rolled down my window and asked, "Are those rocks balanced or do you have a rod through the middle?"  Well, apparently they are balanced and they intend to keep adding one more for every holiday.  So there they balance still, even though we had three earthquakes between 3.0 and 4.0 just over the border in Mexico in the last two days.

Happy New Year over to you Chris & Family!
Dxx

Happy New Year and hope it is a great 2010 for you all, sorry there will be no more Flamborough photo's on my blog, although I will go through all the ones I have taken and see if there are any more I like that I can put up. Your sister mentioned you may be doing a painting of the exmoor ponies on the cliff tops, I love the photo of them on my blog and was one of the last photo's I took there so I do hope you give it a go and let me know if you do.
Take care,
Nicky
New Zealand

Balancing rocks must be a fad in your neck of the woods. Wanda showed an empty lot where someone had stacked up some rocks. They are pretty interesting. I wonder how long they will stay there with all the earthquakes you have. Let us know if they fall.

I have been taking down Christmas today also.

That pillar of rocks is amazing!! Happy New Year...hope 2010 is awesome!

That stack of rocks looks like it is waiting on an earthquake to fall down. I suspect it has a metal rod down through the center of all the stones. I see these on water fountains.

I also like your temperature a lot more than mine at 15° this morning. And snow flowing like rivers through the air.

Your comment mentioned the cost of the no mess bird seed. And then you said two bags were too expensive for your "pocketbook."

Pocketbook is an old expression and one no teenager around here knows the true meaning. LOL Purse comes close to their language. But remember the old snap pocketbooks moms used to carry everywhere?

My Christmas decorations will remain until next Saturday but I usually also take them down on January 6.

The rocks are too cool but I hope there are no kids lviving in that house, does not look safe from this end.

Chris, may you and yours have a Happy New Year. Thanks for all your support and love, I appreciate you more than words can say. (((Hugs)))

Day before yesterday was really really NICE outdoors and I just simply couldn't let it go to waste either. Today was also another nice bare footing weather.

Did you happen to notice the bird before you taken the picture or discovered him afterwards?

The Balancing rocks looks great, by some chance are they still standing after the little earth movements we had?

I LOVE the photo of the bird and the decoration -- would make a beautiful Christmas card for next year. Your new camera makes all the difference.

Keep those temps up high for me -- can't wait to get out of the freezing cold here! I am a real Canadian 'snowbird' now!